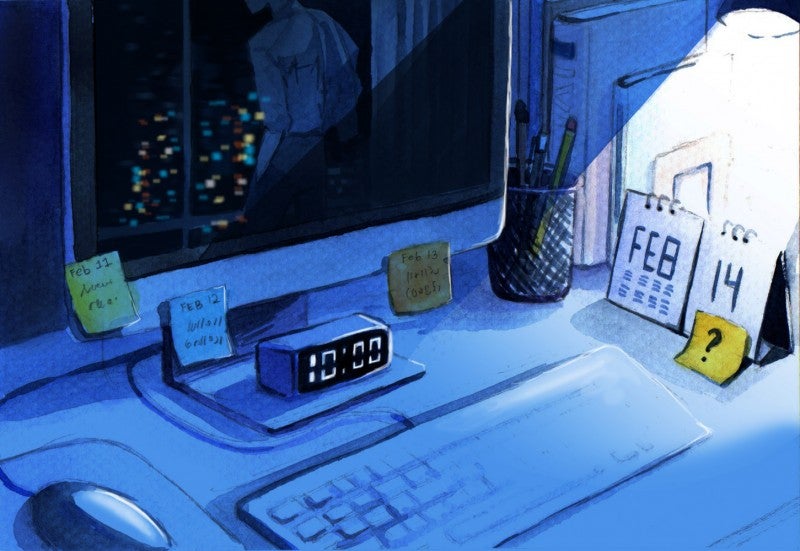 “Sir, don’t you have a date this Valentine’s Day? It’s Saturday and here you are in the office, still working.”

The security guard in our office politely threw me that question because it was a special day and yet I came in to work. My usual response to this question or any question alluding to my singleness has always been, “no time for love.”

But that day, I was able to summon a completely different response and, in hindsight, it was probably the most honest answer I could give: “I don’t have someone right now. Although I’ve been putting myself out there, no one seems to be right yet.”

For the past several months, I’ve been devoting all my energy to my career, having been designated last year as head of a section in my department. It’s a very stressful and mentally taxing new responsibility, one in which I find myself constantly struggling to strike a balance between work and “life.”

Most days, I end up working until 10 p.m., even on weekends. When I’m not working, all I want to do is sleep. So I’ve been telling myself that, really, I have no time for love.

Which is why I had been in one friends-with-benefits setup after another, telling myself it was OK since I had been excruciatingly honest with the women about what I wanted from the arrangement.

Not one of those no-strings-attached arrangements, however, lasted for more than a few months. The culprit was always that one of the two parties involved had breached a vital condition for the setup to work: No emotional attachments and no sense of entitlement to the other party’s affairs.

The friends-with-benefits setup, I now realize, won’t ever work. I have to admit to myself that although I’m very capable of compartmentalizing my emotional and sexual needs, the other party probably won’t. Therefore, I will always end up hurting people even if it wasn’t my intention to do so. And the reality of being able to hurt other people hurts me—if that makes any sense—because I don’t ever want to hurt anybody.

So, at the start of this year, I made a resolution never to allow myself to hurt another girl again, which means that I should never enter into a friends-with-benefits setup again.

Just recently, I met a girl at the gym whom I really liked. I asked for her number and friended her on Facebook. I tried asking her out, twice, but all efforts were in vain.

That I was rejected wasn’t much of a surprise, after all. I am fully aware of my penchant towards liking unattainable women.

What came as a surprise to me was that I could see myself in a committed relationship. The notion that commitments suffocated me no longer held true.

Maybe I’ve become more mature, whatever that means. But I see now that if I want a real relationship—one that’s founded on trust and love—I must be willing to invest in it, to be vulnerable, to give everything I’ve got.

But the other side of this willingness to share one’s self completely must be to find someone who’s worth it, someone who’s equally willing to be vulnerable and willing to give everything she’s got. And there’s the rub. Finding that someone.

That’s the reason I think why I’m still single. It’s so rare to meet someone who’s worth all the risk, who’s worth everything I’m willing to give, because I know what I can give—loving is all about giving—and I know that I’ll do my best to be the best man I can be.

I know my worth; I know how beautiful I am in my own weird and imperfect way. This knowledge of my value and strength as a man compels me not to sell myself short, not to settle, not to rush.

So if I like someone, I take my chances. The worst thing that can happen is to get rejected—that’s just a part of life I have to deal with. But more than taking chances, I try to choose my battles. If a girl I like isn’t interested, I let go. I’ve been comfortable letting go because I’ve also learned to be comfortable just being with myself.

I’m comfortable in my own skin and I’ve learned to accept my average looks, my high-pitched voice and all my imperfections. I love myself and will keep on doing so. I’m happy just being who I am and I won’t ever allow myself to be with someone who won’t accept me for who I am.

Isn’t that the whole point of being in a relationship—to be with someone who truly knows you and loves you just the same?

When he’s not working as a reservoir engineer, Gary Mondejar sometimes finds himself writing his musings (mostly, he sleeps). He writes at Blazing Through Oblivion, while his professional profile can be found on LinkedIn.