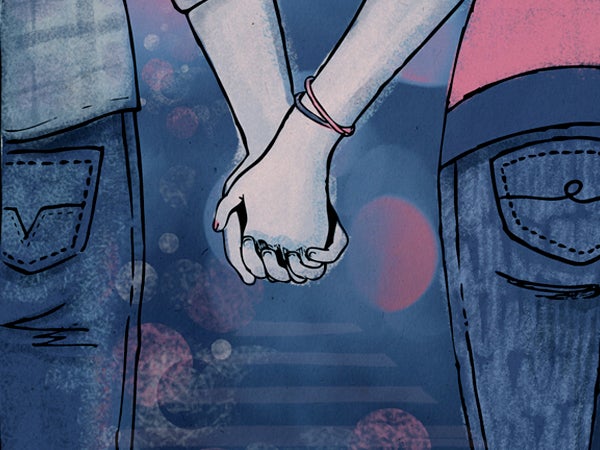 He has this habit of walking by the wrong side of the road. Gentleman as he is, he insists on placing me on the side of the pavement where plants grow and cars won’t hit me, or at least not right away. He unconsciously touches my elbows every time he moves towards the more dangerous edge of the sidewalk, as if to say, “You belong where the road can’t hurt you.”

This is how we met; this is how I first got to know him.

At 16, I didn’t think I was going to meet a great love. Not on the first week of class. Not in PE. Not at 4:30 in the afternoon, when I finally pulled my hair up in a messy ponytail because my bangs just would not cooperate.

The professor wanted us to pair up with someone from the opposite sex, and he paired us up alphabetically. For a convent school-raised girl, this seemed interesting. Our surnames happened to start with the same letter—B. As in, boy this is going to be fun. I looked at him and forced myself to hide a smile. B, as in, Backstreet Boy haircut, parted down the middle a la Nick Carter. B, as in, better find a way to fix my hair on Fridays because there’s going to be a cute boy walking beside me for an entire semester.

To be honest though, he wasn’t the highlight of that semester. It was my first in UP, and as with all wide-eyed freshmen, I recall everything vividly in technicolor. My first free cut, my first Ikot ride, my first isaw, my first R-rated movie. He wasn’t as special as my first Oblation run, or my first UAAP Cheerdance Competition, but he managed to find his way onto that list, filed under my first crush.

Sometimes, I find myself thinking, what if we had been together in our teens, instead of in our twenties, finding time in between law school and structural design, working around our schedules so we can call each other good night and tell each other what we had for lunch and dinner, something we both would have found ridiculous and cheesy as freshmen in college?

I’m sure, as he is reading this now, he is thinking, “Wait, I have a girlfriend. What the hell are you talking about?”

2008 Ludwin did. And I hadn’t the slightest intention of getting in the middle of that. Anyway, I was far too in love with the basketball players on the other side of Katipunan at the time. Mind you, I only had a crush on him, but I was busy suffixing my name with Tiu at the end. He wasn’t going to cut it for 2008 Karla either, as far as Chris Tiu standards were concerned.

Because while I remember him asking me how I was after my stupid injury, I didn’t memorize everything about him. I only remember the way he sang “Remember Me” by Renz Verano in a bid to outdo my drunk Paula Cole version of “I Don’t Want to Wait.” Oh, and that his birthday is on Feb. 28 (not 29, because 1991 is not a leap year).

Actually, now that I think about it, for a crush that lasted for an entire semester, I didn’t know a lot about him. And perhaps it was right to not bother. It was only proper, after all, to maintain a little distance. It wasn’t as if anything was going to happen—no, it wasn’t as if anything should happen. It was as fleeting as happy crushes go. I don’t recall the way he smelled even after two hours of walking at dusk. I can’t imagine what his legs looked like; I don’t recall them brushing against mine. I don’t remember giving him an extra ticket of mine to a UAAP event we were required to go to for class.

But one night five years later, inside his car, he will tell the story of how I gave him that ticket, which rendered his attendance perfect, which led to his first uno. Granted, it was just a PE class, but we will both be glad that I had a part in it. He will hold my hand before the light turns green; I will lean my head on his shoulder. It will feel like an affirmation of sorts, that, unconfirmed feelings notwithstanding, certain body parts fit together like they should.

This will all sound odd right now to him, at 17, when the last thing on his mind is love and the future and finding someone to sing “Got to Believe” to. He still has Physics to deal with; I still have stories to write. He has yet to learn how to not make girls cry; I have yet to get my heart broken. We both have a lot of growing up to do, and a long way to go before we find each other again. I still have to grow out my bangs. He will go through many more cell phones.

Many moons later, though, he will remember at New Year to ask how I’ve been. He will see my name in his long list of contacts, he will be pleasantly surprised to see that it has not been erased. He will wait for my response. It will take months before we see each other again. But it won’t matter. Chance has a way of biding its time, and we are unsuspecting passengers to its next ride.

Later in the summer, we will find ourselves in front of the Sunken Garden, under the same trees that hovered above our first PE class. “So, the Mother had been revealed,” will be the icebreaker. “I bought you ube from Baguio,” will be his surprise. It will amaze us how effortless it will be, how simple, to be talking like old friends. We will not be running out of words, and we won’t be second guessing our smiles, unlike in 2008, when I’m so afraid of him catching me grin every time he asked me if I want a sip of his water.

A few weeks after that date, he will first hold my hand. We will look at each other and need no words. Sometimes, affirmations need no phrases, only feelings. At 21, our eyes will finally learn to speak the same thing. Years down the road, while crossing the street, he will let his fingers touch the small of my back with the same love, the same longing, as if still saying, “You belong where the road can’t hurt you.”

But until then, he will be the man he needs to be until we cross paths again. And I will busy myself with picking up the discarded parts of me that other boys will leave behind. The future will find a way; the past will catch up with the present. He is where he is for a reason, and it will be a long way before he finds the rocky, muddy trail back to me again. And it’s going to be all right. The nows won’t matter as much if it weren’t for the was and the couldn’ts. As of now, he is just he, and I, just me. He’ll find out eventually that a change in tenses weigh just as much as a change in pronouns. One day, it will no longer be I nor he, but us; no longer then and now, but always.

Karla Bernardo is a law student from the University of the Philippines Diliman, where she also graduated with a degree in creative writing. She met her boyfriend, Ludwin, in their first PE class in 2008, Walking for Fitness. They ended up together five years later, making them both firm believers that “true love abangs.” Find her at www.bombastarr.com and Instagram.com (@karlabernardo).

Send you stories to [email protected] Here are the rules.

Bato on ending VFA with US: ‘I don’t deserve this bargain but it’s not all about me’

Group slams Duterte: Terminate VFA because of sovereignty issues, not because of Bato

Part of Aurora Boulevard in Cubao closed from Jan. 25 – Feb. 1

Group slams Duterte: Terminate VFA because of sovereignty issues, not because of Bato

Bato on ending VFA with US: ‘I don’t deserve this bargain but it’s not all about me’