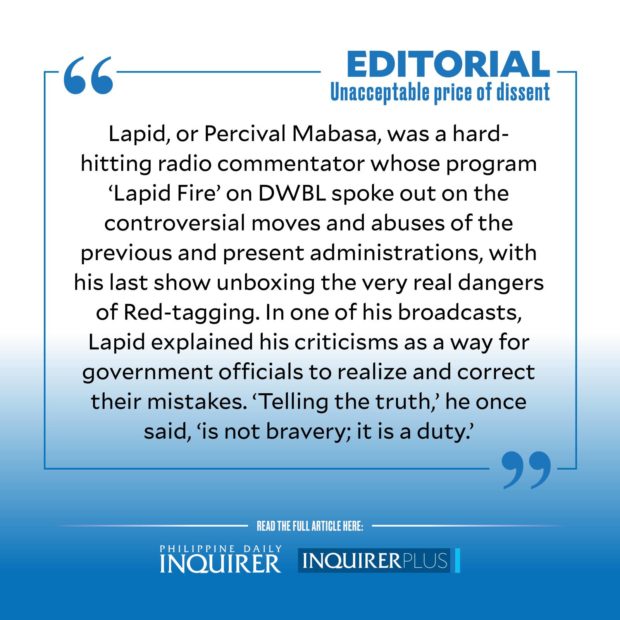 The killing of outspoken broadcast commentator Percy Lapid couldn’t have come at a worse time.

Lapid’s ambush by unknown gunmen Monday night in Las Piñas has added a sense of foreboding to Filipinos already reeling from inflation, soaring gas and food prices, a plunging peso, massive layoffs, and the disastrous aftermath of Typhoon “Karding.” The killing, which happened within President Marcos Jr.’s first 100 days, stirred harrowing memories of how his predecessor had started off its “shock and awe” administration by dropping bodies on the streets in the dead of night, most of them lashed with a cardboard describing them as drug users.

Are the killings back?, people asked. Will the new dispensation be continuing the previous government’s attacks on critics and dissenters, including journalists? During President Duterte’s term, 22 journalists were killed, earning for the Philippines the dubious distinction of being the seventh worst country in the world “where journalists are murdered and their killers go free” in the 2021 Global Impunity Index of the Committee to Protect Journalists.

Lapid, or Percival Mabasa, was a hard-hitting radio commentator whose program “Lapid Fire” on DWBL spoke out on the controversial moves and abuses of the previous and present administrations, with his last show unboxing the very real dangers of Red-tagging. In one of his broadcasts, Lapid explained his criticisms as a way for government officials to realize and correct their mistakes. “Telling the truth,” he once said, “is not bravery; it is a duty.”

Lapid’s case is the second reported killing of a journalist during Marcos Jr.’s term, coming barely two weeks after the stabbing of broadcaster Rey Blanco in Negros Oriental on Sept. 18. That it happened in Metro Manila shows how brazen the assailants have become, and how the police have failed to shield ordinary folk from harm, the National Union of Journalists of the Philippines noted.

The killing has drawn widespread condemnation, with several foreign embassies making a rare act of jointly expressing “grave concern” over the possible “chilling effect” it could have on press freedom. Canada and the Netherlands embassies, cochairs of the global Media Freedom Coalition, were joined by the embassies of Germany, United Kingdom, France, the United States, and the European Union delegation in calling on authorities to deliver swift justice, and expressed their “resolute, unwavering commitment to the freedom of the press, freedom of speech, and protection of journalists.”

There is scant comfort in Sen. Risa Hontiveros’ observation that the killing “also demonstrates the inherent power of speech and truth telling.” Col. Mike Logico’s words confirmed that. “By shooting the messenger, you validate (his) message,” he said.

That message might well be how dissent is vital to democracy as it offers a platform for checks and balances in government, and allows a fuller participation in governance among citizens. Silencing critics allows authoritarian leaders to rule with impunity and a total lack of accountability, with naysayers trampled under the heavy boots of censorship, harassment, and targeted killings.

It was no coincidence that the first act of the Marcos martial law regime was to shut down newspapers and radio-TV stations, and arrest critics and dissenters, journalists included. The attack on media entities has since become a playbook for leaders whose shady dealings can’t stand the public scrutiny that journalists bring on them. Recall how the previous president rallied his allies to close down a network, harass a broadsheet, and file several cyberlibel cases against a news website. The intent is to intimidate and ultimately to stifle dissent, and limit the people’s right to information.

Such underhanded ploy has not always worked. All regimes come to an end and truth invariably comes out, as that investigation into former president Rodrigo Duterte’s crimes against humanity by the International Criminal Court is out to prove.

It’s an exacting lesson that the current administration must take to heart and learn from. For while Mr. Marcos has declared that he was shifting to a more humane and rehabilitative approach to the drug war, he has so far been mum on his policy on human rights, which includes the right to expression and freedom of the press.

The President can also do more than just express “concern” about the killing, as he has so far communicated through a subaltern. His personal condemnation of the crime and vigorous call for justice should speed up police investigation and identification of the perpetrators, and help exact full accountability from them.

Lapid’s murder should give Mr. Marcos a compelling reason to craft a more tolerant policy and expanded space for free expression, while disavowing his predecessor’s often violent response to criticism. This, in turn, should lay the groundwork for a legacy of respect for the law and the constitutional rights of citizens—including critics and dissenters.