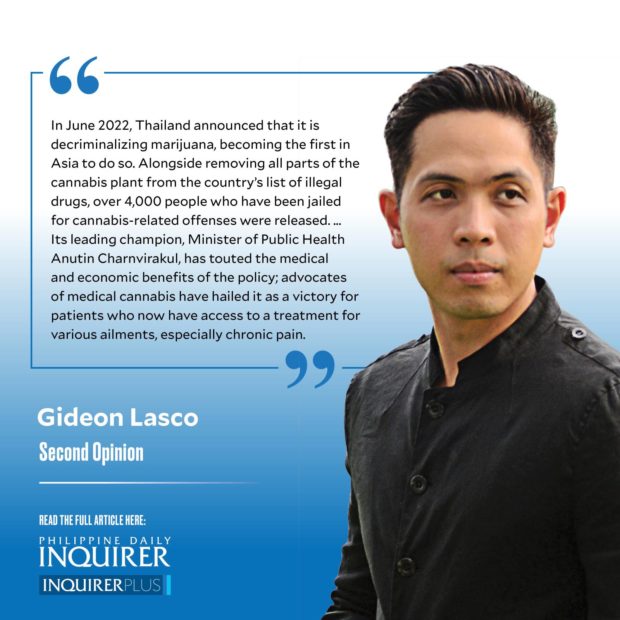 Bangkok—In June 2022, Thailand announced that it is decriminalizing marijuana, becoming the first in Asia to do so. Alongside removing all parts of the cannabis plant from the country’s list of illegal drugs, over 4,000 people who have been jailed for cannabis-related offenses were released.

Since then, plants have propped up in numerous households, and cannabis-related products have sprouted all over the market. In Phuket and here in Bangkok, I have seen a number of cannabis stores and even cannabis cafés—and one can even buy cannabis drinks at a 7-Eleven.

Supporters of the policy claim that it has already done good. Its leading champion, Minister of Public Health Anutin Charnvirakul, has touted the medical and economic benefits of the policy; advocates of medical cannabis have hailed it as a victory for patients who now have access to a treatment for various ailments, especially chronic pain.

Drug policy reform advocates, for their part, have highlighted the sociocultural and human rights implications. As Gloria Lai of the International Drug Policy Consortium noted: “The fact is that long before the international drug control treaties were agreed upon (in 1961, 1971, and 1988), cannabis was part of Thailand’s traditional medical, spiritual, and culinary practices—like in many other parts of the world. After decades of prohibition (following pressure from countries such as the US), it is heartening to see Thailand reclaim its culture and traditions.”

However, a few months since the policy was implemented, it has become no less controversial and politically sensitive, especially since it does not have an implementing law, and has thus become, in the words of a colleague of mine from the Ministry of Public Health, a “regulatory free for all.” Two weeks ago, one such proposed law failed to pass in Congress, with sharp divisions between those who want to institutionalize the new policy and those who seek to reverse it. Given that cannabis decriminalization was a signature campaign promise by Charnvirakul—also the leader of the Bhumjaithai Party—back in 2019, and the next general election is coming soon, it was always bound to be politicized.

The pushback is understandable. Just two decades ago, Thaksin Shinawatra waged a deadly drug war that foreshadowed that of Rodrigo Duterte; while it was a failure and a humanitarian catastrophe, politicians have not stopped arguing otherwise. Today, stories about minors being hospitalized after consuming cannabis figure prominently in the media, reflecting and reinforcing anxieties about drugs in general among the public, as well as the medical establishment, which has warned that “consuming marijuana can be addictive and can have long-term health impacts, including mental illness.” (The same, of course, can be said of alcohol and other legal substances).

Even longtime marijuana advocates and civil society workers, however, have raised concerns over the policy’s ambiguity. “Where do you draw the line between medical and recreational use? In real life, they’re inseparable,” as a cannabis vendor in Silom told me. There is fear that the policy, while popular today, can easily be reversed based on political currents. Then, there are also economic concerns that, as in the US, the cannabis industry would be taken over by big companies at the expense of local farmers and retailers.

Regardless of the fate of the policy, it has already ignited debate in the region, mirroring the generational and political fault lines in Thailand. Singapore, for instance, has vigorously opposed it, and even warned that “any Singapore citizen or permanent resident found to have consumed controlled drugs outside Singapore will also be liable for the drug consumption offense.”

On the other hand, there seems to be some openness in Malaysia about the policy. Some weeks back, I had the opportunity to attend a webinar by Khairy Jamaluddin, Malaysia’s health minister, while he was in Bangkok, and he said he was there “to explore the potential of cannabis,” echoing the medical and economic benefits touted by his Thai counterpart.

In the Philippines, the Thai policy has similarly encouraged moves and discourses around medical cannabis. However, even while politicians like Sen. Robin Padilla ostensibly support legalizing cannabis for medical purposes, their proposals contain harsh provisions more in line with our existing drug laws. Alas, as we have seen, these laws—including Republic Act No. 9165—have led to overcrowded jails and enabled extrajudicial killings.

More than medical cannabis itself, my hope is that Thailand’s new policy would light up a timely (and belated) discussion about our own drug policies, and how they are harming people far more than drugs themselves.

Read Next
Journalists as endangered species
EDITORS' PICK
Pagasa: 1 to 2 storms expected in December
The Best Tech Gifts For The 2022 Holidays
The vivo Y16 makes the season of giving more thoughtful for the whole family
LPG prices up by P2.25-P2.27/kg effective Dec 1
PNP: To avoid crypto scam, visit BSP website
House energy committee chair Arroyo bats for cheap electricity
MOST READ
Don't miss out on the latest news and information.