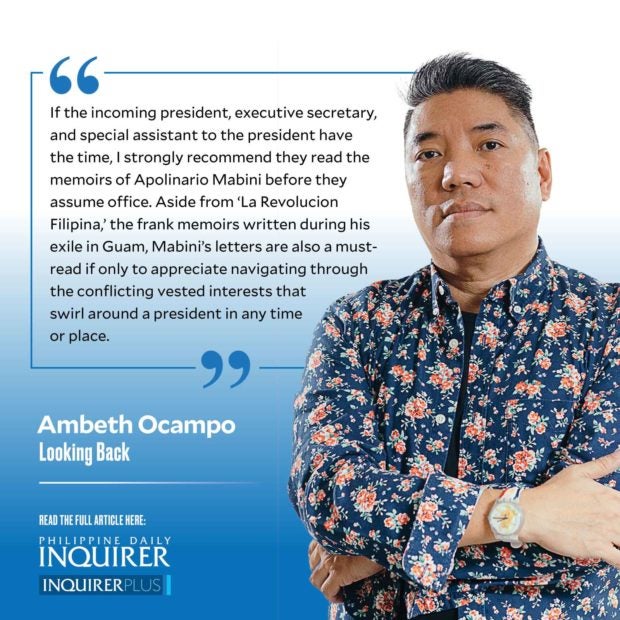 If the incoming president, executive secretary, and special assistant to the president have the time, I strongly recommend they read the memoirs of Apolinario Mabini before they assume office. Aside from “La Revolucion Filipina,” the frank memoirs written during his exile in Guam, Mabini’s letters are also a must-read if only to appreciate navigating through the conflicting vested interests that swirl around a president in any time or place.

Alas, Mabini is one of our underappreciated heroes, overshadowed by Rizal, Bonifacio, the Luna brothers, etc. At first glance, Mabini’s life seems uneventful. He was, after all, a paralytic whose life was one of thinking, reflecting, and writing. There is no romantic side to him, no scandal about him except that generated by his enemies regarding the loss of his legs due to syphilis. That was finally disproven medically when his remains were exhumed in 1980 and the expert medical opinion declared that his paralysis was due to polio. His was not a glorious death on a battlefield nor the killing fields of Bagumbayan, watered with the blood of martyrs like Rizal and Gomburza. Mabini died quietly in his brother’s home in Nagtahan, his death from cholera blamed on tainted, unpasteurized carabao milk.

Having seen some of the respectful, handwritten notes Mabini wrote to President Emilio Aguinaldo, I was struck with the recurring line “Mag-otos po kayo” (Command me) or “Mag-otos po kayo at sabihin lamang ang inyong pasya sa bagay na ito” (Command me and just tell me what your decision is on this matter). A petitioner appeared before Mabini claiming to know the president. Mabini sent him to the president with a curt but polite note: “Mr. President. Bearer says you have known each other from long ago, you are the only one who can decide on his rights or his petition…” Once, tired of all the president’s callers he had to screen, Mabini asked that his office be physically separate from the president’s residence since the office became too busy for him to think. Aguinaldo refused at first and only agreed if a telephone could be installed to keep Mabini on call.

Teodoro M. Kalaw wrote that Mabini “was not only the Prime Minister and Legal Counsellor of the Aguinaldo Government, but also the fiscalizer of the acts of the Revolution. He stood for the most strict moral conduct and he was a submissive slave of the law and rulings. His accusing finger spared nobody, from the highest leader to the lowest soldier … Some of his letters point out the abuses and irregularities committed by officials, civil as well as military.”

Donald Trump’s son-in-law survived the snake pit that was the White House West Wing by cultivating his influence with the president by being a bringer of both good and bad news. When presenting, he emphasized good news to soften the bad news. Mabini did not have the temperament and patience of a courtier, he did not sugarcoat. In one letter, he complained about influential officials and personalities stating, “Mr. President: Although I acknowledge that you have every reason to get tired of me because I only tell you troublesome things, I hope you will have the patience with me this time, as I promise never to trouble you again.”

In the end, Mabini served less than a year. He started in Kawit on June 12, 1898, and resigned on May 7, 1899. Captured by the enemy, he was exiled to Guam, where he wrote his memoirs summed up as follows:

“The Revolution failed because it was badly led; because its leader won his post by reprehensible rather than meritorious acts; because instead of supporting the men most useful to the people, he made them useless out of jealousy … he judged the worth of men not by their ability, character, and patriotism but rather with their degree of friendship and kinship with him; and anxious to secure the readiness of his favorites to sacrifice themselves for him, he was tolerant even of their transgressions. Because he thus neglected the people, the people forsook him; and forsaken by the people, he was bound to fall like a waxen idol melting in the heat of adversity. God grant we do not forget such a terrible lesson, learnt at the cost of untold suffering.”

That Mabini remains relevant for over a century since he died proves that history did not repeat itself. We are repeating it.

Much ado about inaugural