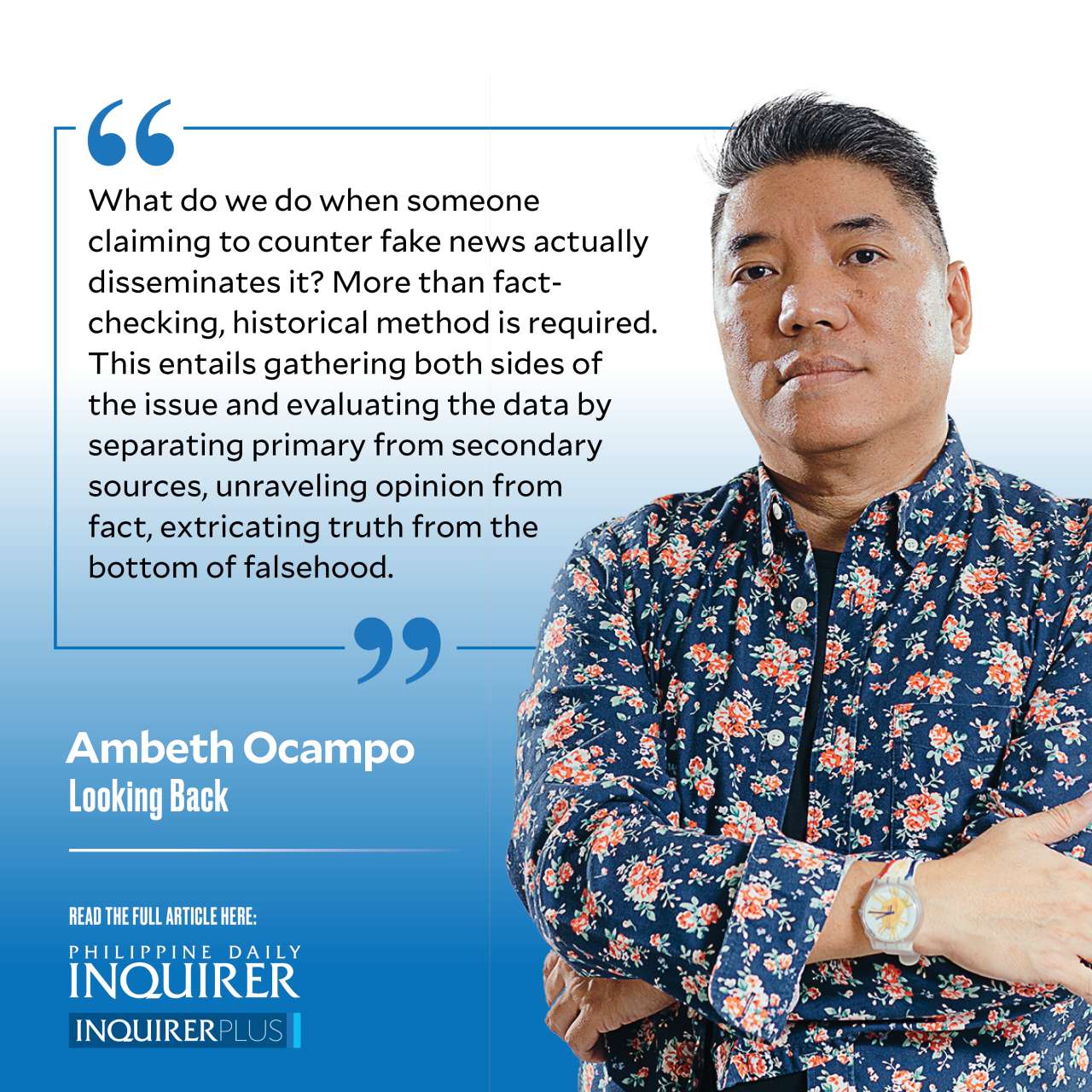 What do we do when someone claiming to counter fake news actually disseminates it? More than fact-checking, historical method is required. This entails gathering both sides of the issue and evaluating the data by separating primary from secondary sources, unraveling opinion from fact, extricating truth from the bottom of falsehood. A current bone of contention is the oft-repeated Amnesty International’s (AI) estimate of human rights violations under the Marcos dictatorship: 70,000 imprisoned, 34,000 tortured, and 3,257 killed. These figures have been challenged head-on and declared fake news by someone who claims the numbers were pulled out of a hat by an anti-Marcos US academic as late as 2001. He says that these figures were never made by AI.

Repeating the above challenge 31 million times will never make it true. These contested numbers do appear on the official AI website, in a public statement dated Sept. 21, 2018 with reference number ASA 35/9139/2018. In case readers want to check it out, the link: https://www.amnesty.org/en/wp-content/uploads/2021/05/ASA3591392018ENGLISH.pdf

Pertinent portion of the document reads:

“On 21 September 1972, then President Ferdinand Marcos signed Proclamation 1081 and placed the entire Philippines under martial law, citing the growing communist threat as justification. Through the proclamation and several other orders that he subsequently issued, Marcos ordered the Armed Forces of the Philippines to prevent or suppress ‘acts of rebellion or insurrection.’ Privately owned media entities were seized and closed; curfews were enforced; and assemblies, including strikes and picketing, were banned.

“The period also saw an unprecedented wave of torture, extrajudicial killings, and other serious human rights violations against peaceful activists and members of the public across the country. From 1972 to 1981, some 70,000 people were imprisoned and 34,000 were tortured; over 3,200 people were killed.“Martial law was lifted on 17 January 1981. Marcos continued to rule as president until 1986 when he and his family were forced into exile following a popular uprising now known as the People Power Revolution.”

On the last paragraph, there are those who insist that Edsa people power revolt didn’t drive the Marcoses into exile; they were kidnapped by the US. That’s the topic for another fact-check, but on AI is an old clip of Ferdinand Marcos Sr. on YouTube from Sept. 17, 1982 where he responds to a reporter’s question on human rights violations as reported by AI. Marcos replied with a straight face, “Well, I’ll tell you that the Amnesty International has never come to the Philippines. That’s why all they talk about is something that they obtained, hearsay…” (41:16 on the C-Span video on YouTube). Did he mean AI had never been to the Philippines at all? Or did he mean AI had not visited shortly before this press conference? Downloadable from the AI website are two reports of fact-finding missions to the Philippines in November 1975 (https://www.amnesty.org/en/wp-content/uploads/2021/06/asa350191977en.pdf) and again in November 1981 (https://www.amnesty.org.ph/wp-content/uploads/2014/11/asa350251982en.pdf). Marcos not only approved the 1975 mission, he was interviewed by AI.

AI reports above make for very painful reading because of firsthand accounts of incommunicado detention, torture, and other forms of ill-treatment while under the custody of government forces. Both reports detail beatings, being burned with lighted cigarettes on tongue and genitalia, being drowned or suffocated, rape, and being made to plank with the head on one cot and the feet at the opposite end with the body hanging like “San Juanico Bridge.” While AI acknowledged that security forces were responding to armed insurgencies, it made clear that:

“International standards governing situations of armed conflict and emergency explicitly prohibit certain practices in any circumstances including torture and arbitrary killing. Reports received by [AI] suggested that members of the armed forces of the Philippines had been responsible for acts of unusual brutality for which they were not held accountable…”

Marcos and the government contested these AI reports as inaccurate. Marcos claimed allegations of torture were made up as a defense in court trials. The assault on truth continues online, so the public is advised to access primary sources on the martial law period online because these are more reliable than the fake news spreading on Facebook, YouTube, and TikTok.