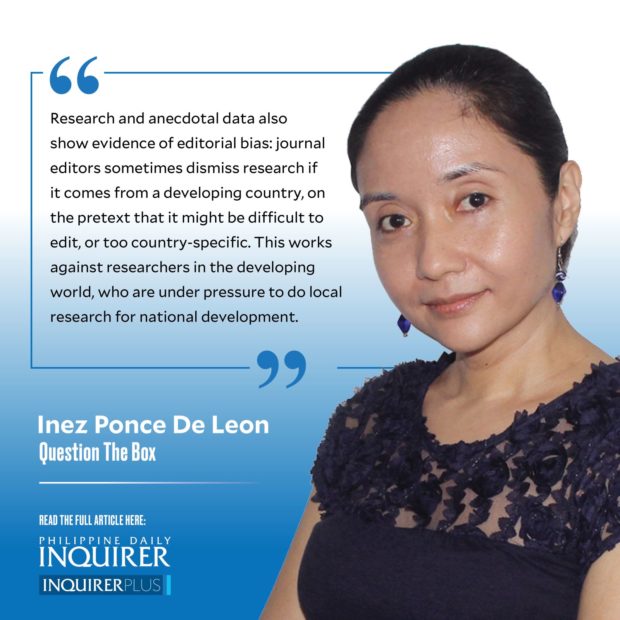 Last week, I attended Ateneo’s annual Scholarly Work Awards, which honors faculty members who publish their research. The volume of publications was encouraging, and I was on a research-fueled high — until I received a loathsome response to my column a few days later.

The writer was a foreign academic, who hyperfocused on my paragraph about the university’s goal of producing new knowledge. Easier said than done, he said: Universities in the Philippines rarely produce peer-reviewed work and settle for gray literature, such as columns and books. Academic institutions in the Philippines, therefore, do not contribute to knowledge.

I replied that we had more publications every year, despite our heavy teaching load. I asked him to be hopeful.

His response: I was too optimistic. Filipino researchers are rarely cited. Academic hiring rules in Philippine universities are too lax. No good local research. No Filipino scientist would ever win a Nobel prize.

My summaries here are mild versions of the miserable acid of the letters. Yes, the Philippines sits low in international research and academic rankings. However, to focus solely on citations as the hallmark of legitimate knowledge is akin to saying that the only good academic institutions are those that are inaccessible and opaque. He also ignored the context of academic publishing, which is no innocent entity extending its magnanimous hand.

Academic publishing thrives in Europe and North America, which are also places of high research investment. A 2021 article by Prof. Brady Lund found that over 60 percent of social sciences journals were published in countries with advanced economies, with less than a tenth available for free. Research and anecdotal data also show evidence of editorial bias: Journal editors sometimes dismiss research if it comes from a developing country, on the pretext that it might be difficult to edit, or too country-specific. This works against researchers in the developing world, who are under pressure to do local research for national development.

Prof. Laura Czerniewicz adds the problem of exclusivity: Researchers are trained to favor journal articles as the only legitimate source of knowledge. Gray literature, including monographs or policy reports, however, provides perspectives on pressing development-related issues, hence their preponderance in the Global South. To disregard them would be to exclude wellsprings of knowledge from which science, as a whole, can benefit.

And because journal articles of the Global North are so visible, they also tend to get cited more often. Academic publishing is big business at its patriarchal best: the rich get richer; the poor get poorer.

There are solutions: Lund recommends more international collaboration to ease out the Western hegemony that predominates research and publishing practices. Czerniewicz calls for a broader scope to encompass what is defined as scholarly work.

Telling a young academic that her country is hopeless, however, is not a solution—especially if that same young academic teaches research classes, publishes in different media, reaches out to various audiences, and is part of an academic institution slowly growing its research culture.

The writer was operating on an invisible “never”: never would the Philippines change, do better, get ahead. This I found offensive, because he represented the kind of people we were fighting against during the campaign season: resigned, unable to see change, insisting on a status quo, unwilling to listen. With his arrogance as a supposed gatekeeper of the academic world, the writer wasn’t just pointing out problems. He was the problem itself.

It is easy to scoff at the efforts and struggles of developing countries when one works within an infrastructure that traditionally supports research. Progress will always look impossible to those resting comfortably in houses that they did not have to build themselves.

The letter writer’s view of education is tragic. To reduce research to mere numbers, and the legitimacy of knowledge to mere mentions, is to turn universities into useless echo chambers priding themselves on how much their members name each other in conversations no one else can understand. In a world of lies parading as truths, ivory tower universities are the last thing we need.

Lessons from an Open House

Going beyond the tests and the textbooks