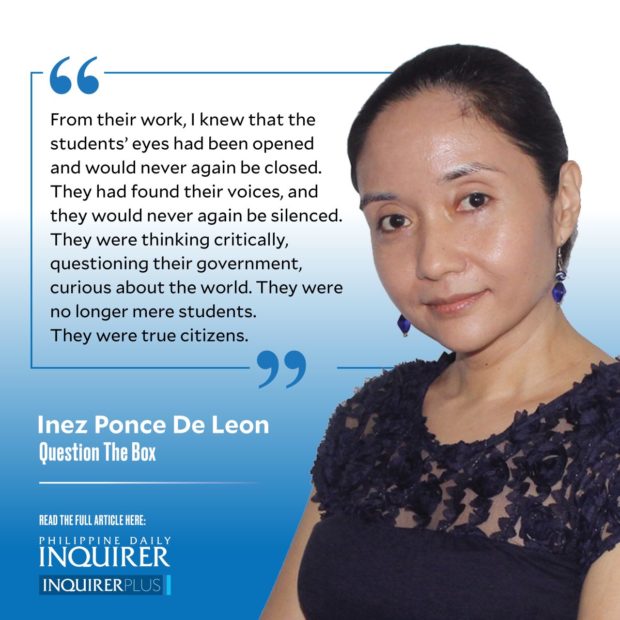 Last week was rough for my students in Science and Risk Communication. To explain the nature of the sadness that nearly overtook their final requirements, I must first explain how the course is structured.

In the class, the students go through science-related issues: earthquakes/volcanic eruptions, biodiversity, COVID, climate change, and typhoons. For each issue, they have to articulate a communication problem beyond the intuitive but false “people don’t know enough science”; critique previous attempts at communicating the issue; propose research to study what the issue might mean to a segment of society (e.g.: farmers, students, workers); and then pitch a research-based communication project specific to the needs of that societal segment.

I train students to be critical of mere dissemination and to explore other strategies in communicating science and risk, especially those which recognize local capacities and indigenous knowledge. The students, for instance, can propose programs to help community members identify their problems and formulate their own solutions; or they can pitch workshops to encourage conversations and cooperation among professionals from disparate fields.

At the end of the semester, they must present their best proposal to the class.

In the beginning, the students kept on reverting to the idea that they simply needed to feed people information. However, as they went from issue to issue, and looked at different societal groups each time, so did their proposals grew ever more sophisticated.

Then the elections came, and the results poured in just as the students were scheduled to present their work.

As the votes were tallied, the students grew increasingly disheartened and disappointed. They asked for a deadline extension. I gave them an hour to vent their frustrations, but I pushed them to present their work. Their projects represented the country that they wanted: one where the government listened to people, based their work on research, and treated problems as complicated situations to be understood.

“You cannot let the forces of despair destroy you,” I told them.

And they presented their work with the fighting spirit of professionals.

One group talked about crafting radio shows based on interviews with fisherfolk on their perceptions of typhoon risks. Another proposed research on how Pampanga rice farmers articulated problems in their environment. Another group pitched a study of how young students understood climate change, as written in school textbooks. And still another group harnessed a complex theoretical framework to create surveys that would examine unexplored aspects of the decision-making process that senior citizens undertook when they decided on evacuation.

When I critiqued the presentations, the students accepted the corrections and even proposed modifications on the spot based on my assessment. They answered questions that I would have asked thesis students during a defense.

Some groups that had underperformed during the semester were suddenly in top form. Those that had always done well were speaking with a passion I had never heard before. I could feel the energy in the presentations, but I could also hear voices breaking, sentences ending abruptly, words trembling.

As the students showed off their work, the nature of their sadness grew clearer: the course, like many of their other courses, had given them hope in their capacity to participate in changing their country.

The students were sad not only because the one that they had voted for had lost. They were afraid that the hopes they had built through their work in class would one day be meaningless in the face of people who simply wanted everything to be done for them, who would shun the students’ attempts at listening, who would simply spit in their faces with a vehement, “Basta.”

When the presentations ended, we bid our goodbyes and closed the class. But from their work, I knew that the students’ eyes had been opened and would never again be closed. They had found their voices, and they would never again be silenced. They were thinking critically, questioning their government, curious about the world.

They were no longer mere students. They were true citizens.

For these, I am proud.