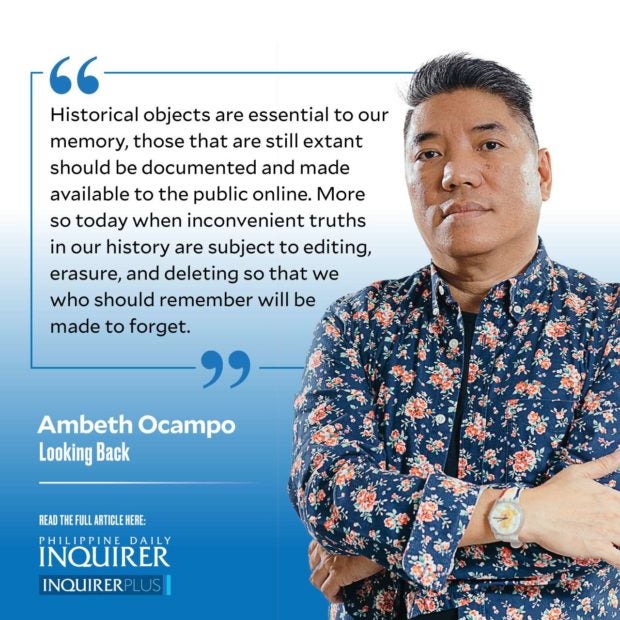 Each year on International Museum Day, I celebrate all museums in the Philippines, and thank them for the important, but often thankless work they do. We must not forget that when the Inter-Agency Task Force for the Management of Emerging Infectious Diseases allowed malls to operate, it kept libraries, archives, and museums closed because these were not deemed “essential” to Filipino life. After two years in limbo, many museums have reopened to welcome visitors back as lighthouses of truth amidst a turbulent sea of online fake news, disinformation, and distortion.

Our public cultural institutions today are separate: the National Museum is custodian of art, anthropology, archeology, and natural history; the National Library for books and printed material; the National Archives for manuscripts and archival records; the Cultural Center of the Philippines for the performing and visual arts; the Intramuros Administration for Spanish-era built heritage; and the National Historical Commission of the Philippines for historic sites, shrines, and landmarks. I have done research in all of them since the 1980s, happy with what they have at hand but sad about everything lost or destroyed in the last 77 years counting from the 1945 Battle for Manila.

In 1938, the National Library and Museum were together under one roof, in the Legislative Building, their paintings, sculptures, and historical objects listed in a published catalog. At that time, they only had a copy of Juan Luna’s “Spoliarium” by Jose Benlliure. Today, we have the original “Spoliarium” presented as a gift from Spain and Francisco Franco in 1958. Of the six original paintings by Juan Luna in the catalog, only one remains. Of the nine paintings by Felix Resurreccion Hidalgo, only two remain. As a historian, I am drawn to 75 “Historical Objects” listed in the 1938 catalog, particularly those that belonged or are associated with our heroes and prominent figures:

Three 19th-century bolos are listed. One brought by Andres Bonifacio when the Katipuneros gathered in Balintawak (or Pugadlawin depending on the source you are reading). That owned by revolutionist Julian M. Garcia “killed many enemies in 1896.” That owned by Anacleto Inovejas saw action against the guardia civil on the night of Nov. 27, 1897 in Lagatik, now New Washington, Capiz. Inovejas’ pistol was also listed together with guns used by Jose Rizal and Gen. Vicente Lukban. Instead of weapons, flags, or insignia, Emilio Aguinaldo was represented by a bottle and glass he used during the Philippine-American War. According to the catalog: “in the absence of a flask, the General used these for carrying drinking water.”

The garrote used in Bilibid to execute criminals during the Spanish period was a museum crowd drawer because of its gruesome history and the claim that it was the same instrument used on Gomez, Burgos, and Zamora in 1872. Of a more personal nature were black silk underwear or “calsoncillos” from the 18th century worn by Rizal’s great-grandfather. Politicians were represented by four gavels. Those by Sergio Osmeña, Quintin Paredes, and Manuel Roxas as Speakers of the House, Claro M. Recto’s as president of the Constitutional Convention.

A pity that these and other relics of the past were not photographed, leaving us with bland titles and dimensions in an inventory. Historical objects are essential to our memory, those that are still extant should be documented and made available to the public online. More so today when inconvenient truths in our history are subject to editing, erasure, and deleting so that we who should remember will be made to forget.