Much ado about inaugurals 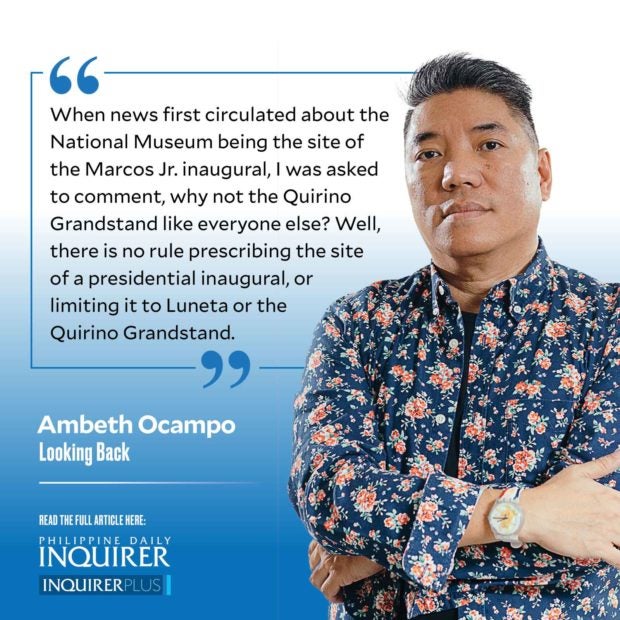 The Fine Arts Building was the site of former inaugurals: Manuel Luis Quezon (1935), Jose P. Laurel (1943), and Manuel Roxas (1946). Had organizers looked closer at the history, they might have opted for another venue because two of the three presidents who took their oath there died in office. All three did not finish their terms. The same for Barasoain Church, which will never be chosen for a presidential inauguration because both presidents who took their oaths there, Emilio Aguinaldo (1899) and Joseph Estrada (1998), did not complete their terms.

Marcos Jr. was quoted saying he was superstitious. One can see the number 7 in his destiny. Wasn’t he the 7th person to file his certificate of candidacy for vice president but didn’t make it in 2016 (1+6=7)? Wasn’t his name number 7 on the ballot? Wasn’t he proclaimed as the 17th president of the Philippines on May 25 (2+5=7), 2021?

His father, Ferdinand Marcos Sr., also had 7 in his destiny. He signed the martial law declaration on Sept. 17, 1972, postdated it to Sept. 21 (three times divisible by 7), and announced its implementation on television on Sept. 23 at 7:15 p.m. When he extended his term by declaring martial law in 1972, it was his 7th year in office. Counting from his election in 1965 to the time he fled into exile in 1986, he was president for 21 years. All this after he called for snap elections first scheduled on Jan. 17, 1986, but reset by Cabinet Bill No. 7 to Feb. 7, 1986. The presidential yacht BRP Ang Pangulo was given the number TP777, but his car had plate number 1 rather than 7 so his wife did better; her plate number was, and I think still is, IRM777. This goes all the way back to his birth date that we all know is Sept. 11, 1917, even if there is speculation that he was actually born in 1916.

When news first circulated about the National Museum being the site of the Marcos Jr. inaugural, I was asked to comment, why not the Quirino Grandstand like everyone else? Well, there is no rule prescribing the site of a presidential inaugural, or limiting it to Luneta or the Quirino Grandstand. Only half of our presidents have taken their oath facing the Rizal monument and flagpole, with their backs to the famous Manila Bay sunset: Manuel Roxas (1946), Elpidio Quirino (1949), Ramon Magsaysay (1953), Carlos P. Garcia (1957), Diosdado Macapagal (1961), Ferdinand Marcos Sr. (1965, 1969, 1981), Fidel Ramos (1992), and Benigno Aquino III (2010).

If we begin our reckoning with Emilio Aguinaldo’s oaths, his first oath was made before the Holy Cross in Santa Cruz de Malabon, Cavite, and his second in Barasoain Church, Bulacan. Vice Presidents Elpidio Quirino and Carlos P. Garcia took their oaths in Malacañang to avoid a vacuum, following the deaths in office of Manuel Roxas and Ramon Magsaysay; both later won full terms and took their second oaths in Luneta. Presidents who took their oaths in Malacañang were Ferdinand Marcos Sr. (1986) and Rodrigo Duterte (2016). Both women presidents took their oaths far from Luneta: Corazon C. Aquino in Club Filipino, San Juan (1986), and Gloria Macapagal Arroyo in the Edsa Shrine in 2001. After completing the unexpired term of Joseph Estrada, Arroyo won a full term and took her oath in the Cebu Provincial Capitol in 2004.

Built from 1918 to 1926 from the design of Ralph Harrington Doane, Antonio Mañalac Toledo, and Juan M. Arellano, the present National Museum was supposed to be the National Library, but it was overtaken by events and instead of housing books and manuscripts to become a temple of knowledge, it housed politicians and became the home of the prewar legislature. Destroyed during the 1945 Battle for Manila after Japanese forces occupied, fortified, and placed booby traps and bombs inside, it was rebuilt in 1949 to become the postwar legislature and, during martial law, the prime minister’s office. It currently houses 29 galleries of Philippine art and is the cultural crown jewel of the nation.