Of telling a secret and tying the knot 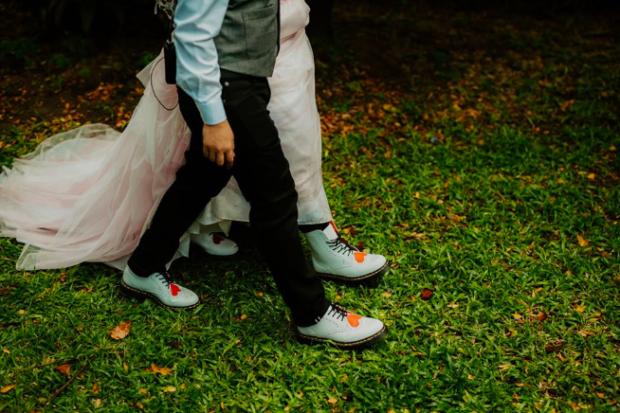 (I specifically requested for time on the podium during our wedding to disclose a long kept secret, not just to our guests, but also to my beautiful wife. For about five minutes, I stood there, my hands shaking as I bared recollections that relived the past, reinforced the present, and hinted at the future. This, in its unabridged straightforwardness, was what I had to share.)

I’ve written a lot about my wife. She inspired approximately 90% of stuff I’ve scribbled on loose sheets and drafted in my cellphone’s Notes. Some of the pieces, she doesn’t understand (she’s a fan of voluminous books but never poetry), but it always, always comes back to her. She’s my mortal muse. There’s no getting around that.

And so it comes as an enormous task to communicate something more to her on this special day. I mean, what else is left to say? All the metaphors have seemingly fluttered from my pen’s reach, which gives this overwhelming feeling that there’s no outdoing more than a decade’s worth of recklessly appropriating her as the Yoko to my John in my coffee-charged musings.

I love her. That’s all I know. And I’ve told her this over and over, sincerely, succinctly, spontaneously, with a sureness of breath and supremacy of feelings, and I think that’s all that matters. For almost 15 years, it’s been like that. I love her and I’m left with nothing grander to say.

So lest I break into spoken word or burst into song, let me share a story instead. One that nobody knows. Not even her.

My wife and I are huge fans of Gilmore Girls. Ask us what our favorite TV series is and I bet we’d utter in unison the show’s alliterative title sans hesitation. There are a lot of memorable scenes from the show, but there’s this particular one that I’m quite fond of. It’s when Luke and Lorelai were on their first official date. A little backgrounder: it took five seasons before the two arrived at that moment so you can just imagine how monumental it was for the fans and the characters themselves.

In the scene, Luke would tell Lorelai he’s all in for their relationship: “Lorelai, this thing we’re doing here — me, you — I just want you to know I’m in. I am all in.” But before that, he’d pull out this scrap of paper from his wallet and show it to Lorelai. It was the torn horoscope page she gave him when they first met. Apparently, Luke kept it for eight years.

In 2005, my wife and I went to a concert somewhere in Manila. It was the first-ever concert we attended. We were still in college and yet to become lovers. We were on a double date with fellow classmates, and I remember our small group driving around the area after the concert until almost the wee hours of the night. There’s nothing much I can recall about the show, but I retain to memory how we went around in circles as we cruised from avenue to avenue, inundated with the free, devil-may-care spirit of a late-night college road trip.

We were in the backseat. We held hands. We kissed. Our tongues shared a language only we understood. Songs were playing in my head, not necessarily from the concert, but I imagined it from a celestial jukebox, as if Cupid had a plump bag of coins and he kept putting one after the other to build a soundtrack to last those wonderful wayward moments. It felt like we were in some coming-of-age movie where the protagonists were rebelling and at the same time deeply infatuated. Or maybe even in love. It was a night to remember.

Now I’m a sentimental guy, but not so much on the level of Luke. Sure, I once collected all the letters I received from past lovers in a paper bag, but God knows where it is now.

However, for some reason, after changing wallets for years and years, I was able to keep the ticket to that concert on that fateful night in 2005. I guess I did Luke one better: he kept his for eight years, I kept mine for 14. But, regardless. We’re the same: perhaps we knew at the back of our minds how momentous it was to risk a promise on an innocent piece of paper and pull it out on the perfect occasion after destiny had unraveled its purpose. 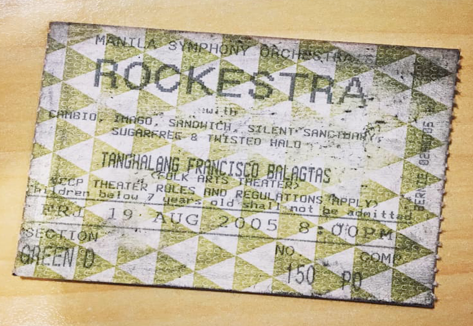 For the record, I didn’t do it to emulate Luke. That would be impossible because I only started watching Gilmore Girls three years after I had the ticket wedged in my wallet. My wife made me, and, being an admirer of a woman with refined taste, I obliged. Perhaps it was one of those odd and unexpected turns where art imitates life. Or maybe, it was “Written in the Stars”, which, by the way, is the title of the Gilmore Girls episode where that Luke-and-Lorelai scene came from.

Keeping the ticket may have started as an innocuous act, but its certitude is both serendipitous and significant. I wasn’t aware then, but maybe that was me telling my wife from the very start that, like Luke, “I’m in, I am all in.” And that hasn’t changed ever since.

Karlo Jose R. Pineda urges everyone to bear witness to the day he and miss Camz tied the knot on 02022020, the first global palindrome day in 909 years. The documentation is found on Instagram and Facebook under the hashtag: #hereCAMZKARLOsbride. This is the third time he has written for “Love.Life.”, completing his personal trilogy.

Roque clarifies ‘winning over UP’ remark