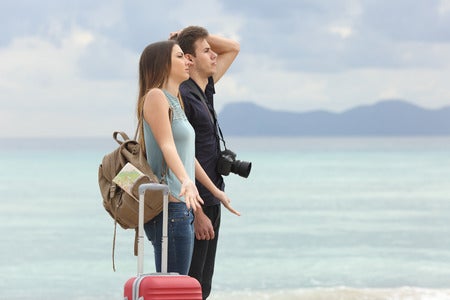 The bedlam was symptomatic and the headlines confirmed it.

Donald Trump was elected to office and his rise to power polarized America. Hurricane Harvey submerged Houston and saw two more hurricanes in its wake ravaging other parts of the United States. There were bombings in London and Manchester. Homelessness swept Ireland. Meanwhile, in the Philippines, the poor were dropping like flies because the government has marked them as easy targets in its tumultuous war on drugs.

The year was 2017 and it was as if mankind was attending a massive concert and R.E.M.’s “It’s the End of the World as We Know It” blasted from the speakers.

The global turmoil wasn’t lost on us. Not that we held strong opinions about it (or maybe we did); it’s just that we, in our smallness, felt chaos in our core too.

Twelve years of being together and things weren’t getting any easier. We’ve been engaged for two years and questions from familiar mouths hounded us. When is the wedding? Are you having a baby? Which will come first, the baby or the wedding? Do you plan to buy a house? Do you even go to church? Do you not get tired of each other?

All of this in a time when 8-to-5 was hectic and we were due moving in to a new rented space in a different city for the second time in two years as live-in partners.

The pressure swelled with severity that she wound up in the hospital trying to uphold her biological resolve amid the stress. By that time, we knew the obvious: life was breaking us down. But we were never breaking up.

So I urged her to get away from all of it, albeit momentarily, to regain proper headspace. And so, commemorating our anniversary, we booked a vacation at a bed-and-breakfast in Laguna, a haven down south we’ve always found refuge in.

All the while we were in that casa, in the hushed moments of us taking in the serenity of our stay, I penned her letters. As if she weren’t there. As if living in the here, the now, was all that mattered.

I. Under the tree

The years have taught us to take comfort in leaves: that in the shade they cast, there are secrets deeper than the color of their crisp, fragile blades. And we delight in our discoveries, pluck handfuls and fashion crowns out of these thin veined mysteries, place them on our heads as royal reassurance that we and only we know the weight of the shadow that falls upon the ground.

Sometimes we dare and dream, look up past the foliage and send our thoughts, swallows aflutter, to the white forest of fluff hovering over our heads.

II. By the bridge

Where we’re going, certainty is neither temple nor turnstile but a wooden bridge that creaks by the weight of our feet, each nimble movement revealing flaws wholeness won’t admit: cracks and crevices aged by time, like how we are, carrying baggage heavier than bags.

What part of the earth expanding under our feet do we relinquish when we saunter?

Leaves litter the pathway, but in the succession of our sojourns seeking sanctuaries, we shall never from this stance — this distance — leave as mere litters.

III. At the doorstep

The pull of light. The grasp of hand turning slowly the curvature of the door knob. The soft swing of this glass panel wedged in a wooden frame further exposing transparency we can touch.

The opportunity beyond shadows, chiaroscuro on cold concrete creeping, now splattering on the blank canvas of consideration like Rorschach.

Having moved in, do we move out or understand the umbra of this room?

The outward gaze whose vision is reflected back in my eyes. In your eyes, the sprawling fields expand, and on them, my heart descends placidly like fog.

Like the rain, we have been suspended by a clearing of clouds — aerial loom of judgment — but freely too, sporadically, released to darken their grounds and drench hopes of summer, like the rain. Like the rain tap-dancing on corrugated roofs, they have questioned us with storms: of tying eternal’s knot, of a moonlit mansion, of babies and how they should smell after baths.

But we are rain to their parade.

Like the rain we decide when to drown this city of the aspirations it has offered the sky, come back raging to return the pressure and test its arks. We are flood. Like the rain we stage a monosyllabic monologue —yeah, sure, no, ‘k — to whet their appetite.

Today, in a day of rain, the clarity behind these falling curtains has never been this clear.

To tell a tale testing the thesis of time: us — two stories running, line by line, word after word, hurdling colons and commas, evading periods and parentheses lest we be contained, get lost in translation or get stuck in transition. We break brackets and braces, numbers as exponents — we are not footnotes, no mere extension of meaning in this mad dash among dashes, always homing like hyphens linking sense for succinct syntax — trying to make it to the next chapter, the next reading, the last part of the telling, before the pages collapse to a close.

VI. In the dining room

Only ghosts remain in the embrace of these jumbled chairs. Wooden and wordless, these witnesses to toasts and testimonials in silent disarray, they wait for the next weight to offer to conversation, stares from two strangers as consolation to their resolve of lumber. I wonder if they’ve ever groaned from spines crashing to them for relief.

When we recline these tired bones to respite, we become the bodies the specters will occupy. There will be a haunting in this empty feast: you and I as hosts, as hostages of discussions begging to be buried.

Karlo Jose R. Pineda graduated with a bachelor’s degree in Journalism from the University of Santo Tomas. His prose and poetry have appeared in various publications locally and abroad. A drummer and an occasional vocalist, he swears he owns more band shirts than you do. This essay is his second under INQUIRER.net’s “Love. Life.”