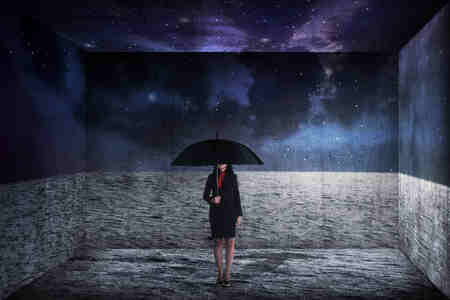 I remember vaguely using it in an attempt to slyly woo a girl from college. Back then, online journals were a trend and GIF images were indispensable from their layouts, as were animated texts, subversive banners, and overly elaborate designs. Texting, too, was the paramount alternative to handwritten love letters.

The day I discovered this girl’s blog in the World Wide Web, I shot her an SMS message that says, “So, you have a pulsating pink star as your avatar,” a statement I readily coupled with an apt metaphor I anticipated would sweep her off her feet. Sadly, the metaphor has now slipped my recall.

My brashness back in the day was astounding; I was a puerile pensman at the doorway of discovering poetry and deemed every line I conjured was brilliant and beautiful. But then again, we can’t solely blame poetry for my behavior.

It’s second nature for guys to fly the most colorful of kites when girls are around.

I. Getting to know her

While waiting for her reply, I knew at the back of my mind I was a Casanova making a great impression. I slid a big word (“pulsate” was highfalutin that time) into a Neruda-esque line (or so I thought) sure to knock off the sweet tooth of her heart (if indeed there was). “It’s an instant swooner!” I told myself. Yep, that was me—a self-absorbed prince waiting for his fair lady’s response to affirm his prominence and stroke his ego.

Busted. Talk about bringing out a giant snow ball after lighting a matchstick.

That brief and awkward moment of reproof recurred as she and I got closer. In those instances, I found myself silently nursing my bruised ego and reconsidering my ways of relating with her. But there came out something good from it: it made me understand one of the many reasons why, after six full years, I still stick things out with her.

Yes, despite overshooting my first impression, I eventually ended up with Camz, whom just the other night I had this playful deal with: “On our next monthsary, let’s bet on the lottery. If we hit the jackpot, let’s get married next year.”

Here’s the deal: it’s common and almost easy for girls to fall for their suitors’ pseudo-saccharine ways, but to find one who knows how to differentiate candy-coated gibberish from sweet nothings is nothing short of special. Having someone to call out your blunders, lovingly, is special, too, in a way that it makes you know yourself more and pushes you to become a better person—and that, for me, is great love. What a really cheesy line. But true regardless.

II. Getting to know me

I believe people are born with imaginary walls hemming them in. As time goes by, they meet other people who would tear down these walls — knowingly or unknowingly — to see what kind of monster or angel there is to find. If the one inside feels his invader does him good more than harm, he helps her rid a brick or two. It’s a way of opening up: poking bricks, one after the other, to reveal himself to a stranger eager to see him, whom he trusts enough to let himself be seen.

Others succeed in going beyond the barricade, with a certain kind of knowing to be had right after. Meanwhile, there are some who struggle in completing the break-in. It’s a common occurrence that after breaking in, there’s nothing there but a wisp of unspoken conversations. The insider finally sets eyes on the one who did the unfolding, but there is absence of movement. Usually, despite the former’s invitation, the latter hesitates to reach out: there they are, two bodies free from divide but bound by difference. It’s as if there between them still stands a wall more difficult to destroy — a wall within a wall: the plot’s unnecessary thickening.

Maybe it’s because the excitement of demolition bears greater value than the essence of discovering.

Or, perhaps, it’s the imminent nearness that drives them apart.

But then there’s a story sadder than this: that which sees the one inside slipping stories through the cracks of the walls so the one outside can read slivers of his life. Over and over. Day by day, week by week, month by month, year by year. And they contain themselves within this exchange, laughing or crying with a wall wedged against their faces. They pretend to have found each other without having to know who they really are.

In the bus this morning I watched you sleep and realized why I have stayed with you all these years. You are beautiful. Even in the hushed state of your face, your eyes seemed to smile; their lids gently throbbing against the soft sunlight had me wondering what dream you were dreaming, what animated scene played in your drowsy psyche.

From time to time you’d wake up and ask if I was OK with the perturbed position we’re in: your head was rested on my arm which was already on pins and needles, numb and dead. I’d offer your forehead a kiss to reassure you. You’d shut your eyes and continue dreaming. (You are beautiful.) Once, before going back to slumber, you mentioned how I particularly smelled good today. If my heart had a scent, it would be yours. I wanted to tell you that.

In those short stops, I also wanted to tell you it wouldn’t matter if somehow my arm rots and gets frail from bearing the weight of your head heavy with pressure and preoccupation and, like how in the zombie show we watch, it freakishly disconnects from my body eventually. It would lay departed on the bus floor and butterflies would start swarming over it, and these winged creatures I’d collect and construct into a crown for you so you could feel majestic like those strong queens you adore in your books. It will suit you.

Because you are beautiful.

If that’s the cost of your comfort in this long journey we’re in, then let it be. Let me lose my arm in the privacy of your presence, the blooming of butterflies. Let me lose my entire body, and my soul too.

In this trip, no one gets off until we’ve reached our destination.

Karlo Jose R. Pineda is a social media marketing supervisor. He plays the drums for A Bedroom Mindset, does vocals for 1990s cover band Soniqsalad, and trains with Orange Dance Studio. Writing further about the love of his life, he said, “Camz and I are now finalizing the date of our wedding. We’re college classmates, UST-JRN batch 2006. The stories I shared were taken from various points in our 13-year relationship.”