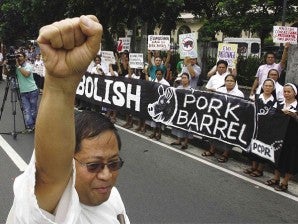 ANTIPORK RALLY AT STO.DOMINGO CHURCH Fr. Chito Vicente along with other priests, sisters and lay leaders hold a rally in Quezon City for the abolition of the pork barrel system. They are also demanding punishment for those who took part in the pork barrel scam and the rechanneling of pork funds to education, health care, housing and other social services. RAFFY LERMA

The untranslatable kahindik-hindik is how Commission on Audit (COA) Chair Grace Pulido-Tan described it (roughly put: causing such distress as to make one gasp for breath).

Indeed, only the most cynical can read the 453-page COA special report on the allocation and utilization of pork barrel funds from 2007 to 2009 and not come away appalled.

The report is a snapshot of the arrogant disregard for rules pervading a system that has accommodated pilferage for far too long.

Among the unbelievably blatant acts revealed are allocations to nongovernment organizations (NGOs) for projects with ghost beneficiaries; funds passed on to NGOs without bidding; public works projects built on private land; NGO recipients incorporated by and even named after sponsoring legislators; and pork barrel funds passed on to local government units then used to maintain congressional district offices.

Since then, one high-profile suspect has been detained, Senate hearings have begun and both executive and legislative branches are scrambling to assure the public that controls have been tightened and charges are being readied against individuals to be held accountable.

Now, citizens should stand down and just watch while justice takes its course and the guilty are punished, right? Wrong.

The public should in fact remain even more deeply engaged and informed. For the pork barrel mess presents an opportunity not just to plug leaks and strengthen budget controls but also to confront whether scarce public resources for development have been allocated and used efficiently and strategically.

The pork barrel system should be abolished even if one could be assured of zero corruption and zero leakage. For inclusive development to matter at all, we cannot continue to dissipate government funds through pork barrel-like allocations.

Rather, these and other lump sums would be better spent on strategic and integrated initiatives planned and coordinated by provincial governments.

In the 2012/2013 Philippine Human Development Report (PHDR), we argue that current policy has failed to take into account the effects of the country’s peculiar diverse geography— tropical, diverse, archipelagic— on development. As a result, a steep price has been paid.

Geography is a deep determinant of human development. It has a direct impact through its influence on human health and agricultural prospects, and an indirect impact because it affects access to markets and the quality of domestic institutions.

Many threats to human health, such as worm infections and other neglected tropical diseases, are location—or site-specific, affected by natural factors like rainfall and topography, and even by nonhealth policies such as local irrigation systems.

Agricultural prospects are also site-specific, being determined by local climates and soils. Access to markets and public services obviously depends on topography and landforms. Economic distance—the ease or difficulty of moving people, goods and services between locations—is affected by difficult geography.

Such wide variations in local conditions suggest that no optimal outcomes in health and agriculture can be expected from one-size-fits-all types of programs.

Yet, cookie-cutter programs are exactly what the national government continues to provide. Indeed, even the pork-barrel mess was shaped by this mindset.

This sham went on when what would really have been required were integrated, customized services adapted and relevant to local conditions.

As one example, foregone benefits from the failure to address worm-borne illnesses are estimated at an additional year to an average child’s education, a 34-percent reduction in work days lost and an improvement in wage earnings by 21 to 29 percent.

Failing to provide customized services in agriculture can amount to a 150-percent increase in yield foregone.

The rationale for the pork barrel system, thus far, has been that it adapts spending to local needs in a way that the national government cannot. To see whether it does so, in fact, one needs to have a broader idea of what local needs truly are.

Local geography has implications for growth and human development across the country.  In the first place, growth never spreads out smoothly across space. Imbalance and unevenness in economic activity are the rule even when an underlying geography is flat and undifferentiated. And even more imbalance and concentration can be expected from a diverse and archipelagic geography.

Economic scale and agglomeration lead inevitably to economic activity being concentrated in just a few places. After all, concentration facilitates specialization and trade, then feeds on itself as more people and firms move closer to it to take advantage of agglomeration economies.

A hierarchy of places then typically emerges: Leading places will be those with the greatest density or market potential. What is crucial for the development of lagging areas is their connection to and interaction with leading areas.

But living standards can converge geographically even though growth and economic activity remain unbalanced. Differences in location need not translate into differences in human opportunities.

For human opportunities to converge geographically, what is needed is a policy of economic integration. This involves, first and foremost, access to basic and social services needed to build human capabilities—primary health, basic education, water and sanitation—irrespective of location or cost.

Efficient land markets are also important, as are spatially connective infrastructure to facilitate the mobility of people and firms to and from dense urban areas. The approach allows urbanization to occur where it may while guaranteeing that no one is disadvantaged even when some places must be “left behind”—as must inevitably happen.

Such policies allow the efficiencies of growing density to be reaped even as they ensure the benefits are more widely shared.

Instead of integration, however, the implicit government policy has historically been one of dispersion, typically cloaked as the pursuit of “balanced growth” or an “equitable distribution of growth.”

This is a well-intended but ultimately counterproductive notion. Growth is inherently unbalanced and the emergence of lagging areas is to be expected. To resist these forces—such as by prematurely pushing production to lagging areas in order to “spread out” economic activity—is tantamount to suppressing growth itself.

Hard lessons should have been learned by now from repeated but failed attempts to spread out industry and economic mass to regions such as in the 1980s through regional agro-industrial centers or in the 2000s through Strategic Agriculture and Fisheries Development Zones.

This counterproductive bias for spatial evenness and dispersion is due to the “divide-by-N” syndrome, the “mechanical and feckless dissipation of government funds across localities rather than their rational allocation to where these might have the most impact.”

Divide-by-N is seen in the duplication of infrastructure and programs without regard for scale economies, synergies and the conscious integration with larger markets.

Apart from the free-port fiascos, examples are the country’s portfolio of 87 airports, most of which are within a two-hour ride from each other; 140 seaports, 40 of which lack any traffic; 534 state university and college campuses (alongside 93 local colleges and universities and 1,604 private institutes) staffed by faculties only 37 percent of whom have graduate degrees.

Divide-by-N is also apparent in the fragmented allocation of public resources across space and time such as in “bridges that lead to nowhere, dirt roads interrupted occasionally by concrete paving and half-roofed schoolhouses,” as well as in waiting sheds, entrance arches, multipurpose pavements and other small projects with little or no development significance dotting towns or cities. But this is exactly the allocation the pork barrel encourages and that is now documented in the COA report.

To begin with, what is the rationale for each member of Congress having an allocation of the Priority Development Assistance Fund equal to that of their fellows? Are the needs of their constituencies of the same magnitude and priority? Are there not local needs that are larger or smaller than the bounds of congressional districts? Or maybe even larger than a senator’s “allocation?”

Even absent corruption, therefore, the opportunities thrown away under the pork barrel/divide-by-N are large and include the waste from duplicate and fragmented works, unexploited agglomeration economies, synergies and lost growth.

Nor is equity even a counterargument, for a policy of dispersion and dissipation of resources that could have helped the poor cannot be justified as a policy of equity.

Recognizing the demands of local geography, the PHDR instead advocates making the province the planning domain and the anchor for providing integrated customized public services.

They are “the most practicable level of political authority to give full weight to the specificity and diversity of local conditions even as it is capable of adopting a viewpoint comprehensive enough to adopt programs that exploit potential economies of scale and scope”—neither the vertical silos of central government nor municipalities can come close.

Provinces are also in the best position to sequence and calibrate policies necessary to oversee inclusive rural-urban transformations.

Provincial authority over important services is limited while municipalities are assigned functions that require scale beyond their reach; tax bases and tax powers are circumscribed; provincial spending responsibilities far outweigh funds given to it (i.e. share of provinces in the cost of devolved services: 37 percent.

Their mandated share in the Internal Revenue Allotment (IRA): 23 percent. For cities, shares are 5.7 percent and 23 percent, respectively); and provincial plans are frequently only partially implemented owing to the weak fiscal capacity and autonomy of provinces.

Short of new legislation, the planning and fiscal authority of provincial governments can be bolstered by allocating the amount intended for pork barrel to them in support of provincial development and investment plans.

Other possible measures are the following:

Subjecting the amounts now being allocated for the so-called “bottom-up budgeting” (BUB) of municipalities in their jurisdiction to provincial control. (In bypassing the province, the BUB effectively recentralizes the budget. This measure corrects that anomaly.)

Subjecting the use of non-IRA funds for devolved functions (e.g., Department of Agriculture funds for programs and projects to be implemented in a province) to provincial government control.

The pork barrel system has outlived its rationale and usefulness since the Local Government Code was passed in 1991. Before that time, local governments had no real power.

Since that law was passed, however, the direction of reform has been clear: The old complaint about national agencies’ inability to address local needs was met by giving resources automatically to local governments.

At that point, intervention by legislators became unnecessary in principle. For it is local governments, especially provinces, that have been given the mandate, the holistic perspective and the means in principle to identify the local priorities and address them.

Yes, abolish the pork barrel system. Empower the provinces instead.

(On the matter of dynasties, we say: Both legislators and governors suffer the same defect. But people have far closer policy and political proximity to governors, who are required by law to also work with councils and mayors.