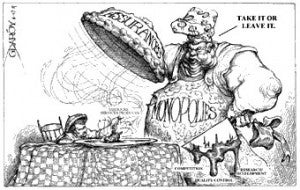 Passage of the reproductive health bill is not yet assured—and here we have some of the same proponents pushing for divorce. If we didn’t know any better, we would say that Gabriela, the party-list group behind the new bill, is not serious about legislation at all, but only interested in scoring political points.

There is a time to debate the merits and demerits of legislating divorce in the last predominantly Catholic country in the world, apart from the Vatican itself, that continues to ban the practice. But that time is not yet.

The seeming strength and consistency of popular support for the RH bill should not mislead its advocates to assume that the bill will pass in the House of Representatives, and that somehow the Senate will drop its internal debates and simply acquiesce. Indeed, it would be sheer political folly to assume that the deep controversy over the bill can be resolved simply through a vote in Congress.

The best argument for the RH bill as it now stands is that it will help minimize the number of illegal or illicit abortions we suffer every year. Think of tens of thousands of innocent lives spared—but even this powerful argument will lose its potency if the debate over the RH bill becomes entangled in what will be an equally disruptive debate on divorce.

The essentially cultural argument against the RH bill—that it will open the doors to greater promiscuity, to widespread and legal abortion, to the horrors of a runaway liberalism—was always rather alarmist. But the reckless introduction of the divorce bill reinforces this argument, gives it more ammunition.

It doesn’t matter if many other advocates of reproductive health reacted with dismay or anger to the divorce bill, which was vetted at its first hearing only a few days ago. Or that there is growing legal consensus that the Constitution must first be amended before a divorce bill can become law. (The constitutional provisions about the sanctity of the family are quite explicit.) A contentious debate over divorce will inevitably be conflated with the contentious debate over reproductive health—to the likely detriment of the RH bill.

This is political reality, and explains the dismay and anger among some pro-RH lawmakers. At the exact time that the fate of the RH bill hangs in the balance, two of its proponents decide to start another controversy. Is this any way to secure passage of a difficult bill?

Politics in a democracy, of course, is the art of compromise. We often understand this principle to mean that each political act is subject to negotiation, the product of give-and-take. But compromise also refers to readings of the political situation, to the very conditions of possibility. Sometimes the progress of one bill will impact on another; sometimes the controversy over one issue will siphon off political support for another.

Now contrary to the monolithic image we may have of Congress, each lawmaker faces his or her own set of limitations. If a full-scale controversy over divorce erupts, we should not necessarily expect those lawmakers who took on great political risk by countering Catholic Church opposition to the RH bill to take on a similar risk over divorce. There is another fundamental principle in politics, and it counsels caution: Choose your battles. It is only those legislators who are not interested in passing legislation, but see the legislature as primarily or only a public forum, who will go to war (politically speaking) regardless of the consequences.

The right time to discuss the possibility of amending the Constitution and possibly legalizing divorce is several months, or even a year or so, after the RH bill is enacted. The passage of time will heal some political wounds, yes. But even more important, the enactment of the RH bill would provide the public with the breathing room, the necessary break, to consider the vexing question of divorce in its own right, and under the harshest light.

It may be that the politicians who are pressing the divorce bill are themselves divorced—from political reality.