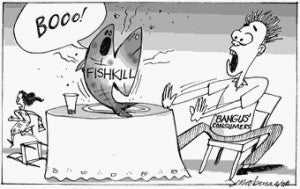 The just-released numbers on first-quarter economic growth provide a window, not only into the macro-economic and geopolitical factors shaping the economy, but also into the Aquino administration’s approach to governance. From 8.4 percent growth a year ago, the gross domestic product grew by only 4.9 percent in the first quarter this year. Volatility across the globe was one major reason for the slowdown; but so was excessive government caution.

Except for extreme partisans, with whom there is no debating, general consensus exists on the decisive factors. Former Budget Secretary Benjamin Diokno sums them up succinctly: “the failure of the Aquino administration to implement its modest spending plan; a harsher, more uncertain and more calamity-battered world economy; and base effects.”

The third factor simply means that last year’s growth rates were out of the ordinary. Compared to them, first-quarter growth could only have looked anemic. Or as an economist from HSBC put it, the country is only returning to its normal growth pattern. Last year’s growth was extraordinary in large part because of election-related spending and massive end-of-term expenditures by the outgoing administration. (A global recession-weakened 2009 also contrasted sharply with a vigorous 2010.)

The second factor is easy enough to appreciate: The global economy continues to be sluggish, and the disruptions caused by the political turmoil in North Africa and the Middle East as well as the terrible earthquake-tsunami-radiation crisis in Japan have affected economic performance.

It is the first factor that poses a puzzle. For one thing, someone like Diokno can assert, boldly, that “the government’s ability to generate economic growth is overrated.” And yet he can also quote government statisticians approvingly, to the effect that “if the Aquino administration had allowed public spending to grow by 5.8 percent, the same pace as last year, GDP would have grown by 5.4 percent”—a difference of half a percentage point, equivalent to tens of billions of pesos. Perhaps unconsciously, some critics are caught in this bind, of minimizing the impact of government intervention and yet effectively blaming the government for not intervening enough.

But we are all Keynesians now, and in our view and that of many others the only real question is the amount of intervention.

That is the problem. The real story of the first-quarter GDP figures seems to lie in the unbecoming cautiousness of the Aquino administration; officials from the President on down have been reluctant to spend. We think this excessive caution has to do with the anti-corruption platform on which Mr. Aquino rode to power. Conscious of, indeed overly sensitive to, rumors of corruption, the administration may have held itself back, preferring to take its time engineering corruption-free conditions before committing to more spending. That effectively made economic growth a hostage to the anti-corruption fight.

As Diokno phrased it, “Fighting corruption should be done with minimal collateral damage to the effective delivery of essential public services.”

It is difficult to take this piece of advice as an absolute. The dysfunctional Estrada administration (which Diokno served) could not be said to have done either with great success; the Arroyo administration sought to trade off effective delivery for what it must have thought was a tolerable level of corruption.

But how much time should it take for the national government to put the right safeguards in place, to allow corruption-free spending? The President knows there is no real alternative to strong government spending. The other day, he told reporters that in the second quarter, the government will again be pump-priming the economy. Well and good, but in fact there is only a month left of the second quarter, the rainy season will probably turn the third quarter into a washout and the actual priming of the pump may not take place until the fourth quarter. Cautiousness can be costly.