Brazil and the Philippines | Inquirer Opinion

Brazil and the Philippines 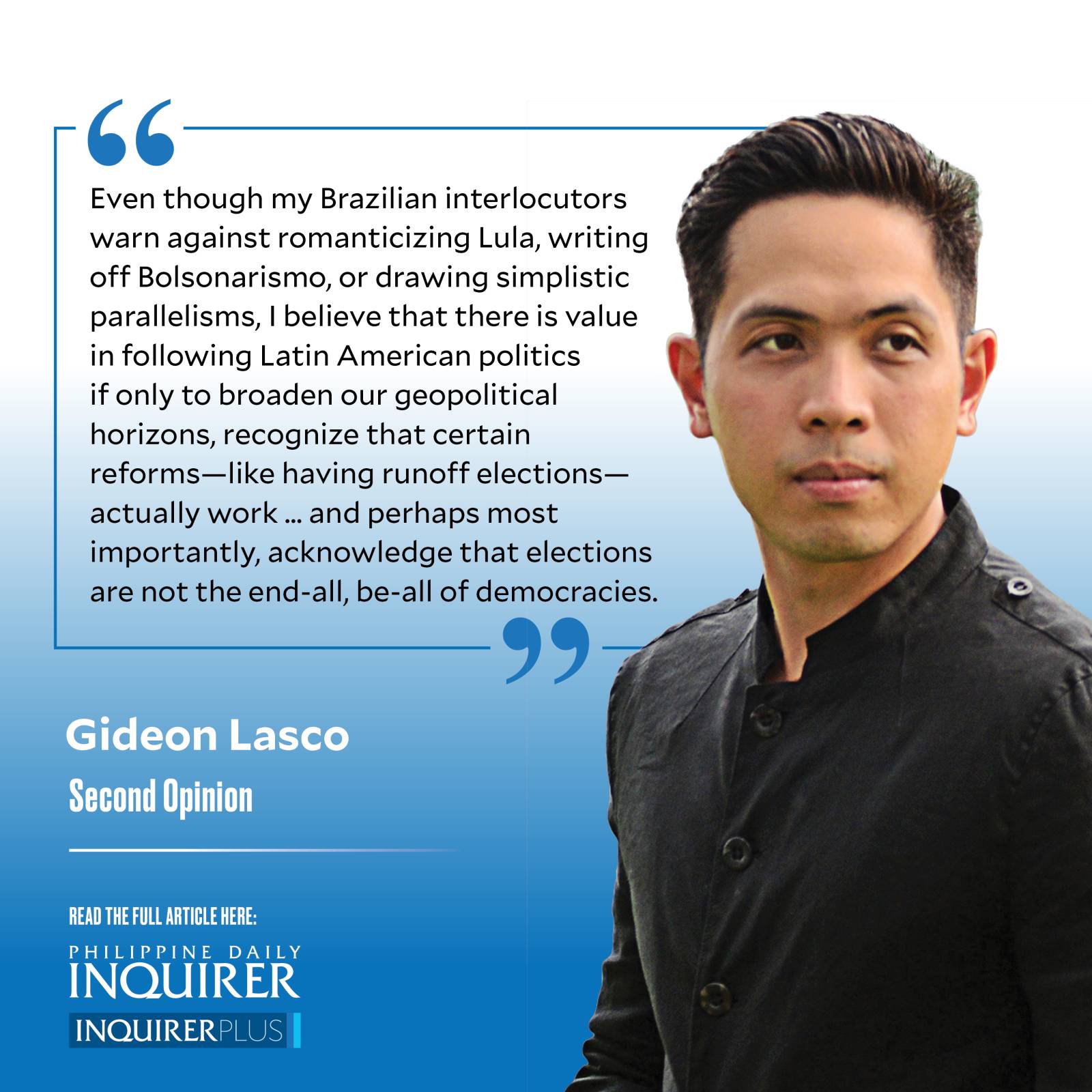 São Paulo, Brazil—When I taught a short course in medical anthropology at the University of São Paulo (USP) in the fall of 2019, my colleague, Prof. João Gonçalves, gave me a tour of the campus and I was reminded of the University of the Philippines Diliman with its open spaces, tropical trees, charming old buildings, and, of course, the students walking around.

The buildings were beautiful and architecturally fascinating, but what struck me the most was the Torre do Relógio, the clock tower at the heart of the university, particularly because of the inscription that surrounds it: “No Universo da Cultura o centro está em toda parte.”

In the universe of culture, the center is everywhere.

Coming back to São Paulo three years later, I am reminded of that motto and how relevant it is for our countries, both of which are considered “peripheral” in the way many, including us, see the world. For geographic and world historical reasons, we have not had the connections—cultural, academic, political, economic—that would have enriched our countries.

This is not to say that Brazil—the world’s fifth-largest country by land area—has no place in our consciousness. We know Brazil as the land of bossa nova, beautiful bodies (the makings of which I saw in their packed gyms), and “the beautiful game”; there are few places on Earth that evoke as beautiful a life as Ipanema, under the shadow of Corcovado.

The converse may be less true, but even here there are Filipinos—seafarers in Rio de Janeiro, expats in São Paulo, Instagrammers in Iguaçu Falls; some of the university students I met at USP follow Philippine politics (one, a communist—and here it is perfectly legal to be one—was a big admirer of Joma Sison).

And of course, the local backpackers have seen pictures of Palawan and dream of going there; just as we romanticize the beaches of Brazil, so do the Brazilians romanticize the islands of the Philippines.

Still, we are missing out on learning from each other—and engaging directly with each other instead of relying on Global North intermediaries. Filipino anthropologists, for instance, might be familiar with Brazil’s favelas courtesy of Nancy Scheper-Hughes, but not from our Brazilians counterparts. Many Filipinos have read Paulo Coelho, but far fewer have read Paulo Freire, whose ideas are very relevant given our national experience. Indeed, we have common social and environmental issues—from the destruction of our forests to the obscene inequities in our cities.

Such shared predicaments have given rise to a strong socialist tradition in the country—from liberation theology in the 1970s to the “socialism of the 21st century.” It has also inspired some social innovations from participatory budgeting in Porto Alegre to conditional cash transfers in Brasilia. Our 4Ps program is descended from the latter, by way of the Bolsa Família that was scaled up throughout Brazil during the first presidency of Lula to considerable success and acclaim even from neoliberal institutions like the World Bank.

Speaking of Lula, there is the understandable temptation to apply political lessons from his recent victory for the Philippines. Even though my Brazilian interlocutors warn against romanticizing Lula, writing off Bolsonarismo, or drawing simplistic parallelisms, I believe that there is value in following Latin American politics if only to broaden our geopolitical horizons, recognize that certain reforms—like having runoff elections—actually work (see “The case for runoff voting,” 3/11/2022), and perhaps most importantly, acknowledge that elections are not the end-all, be-all of democracies. After all, Bolsonaro’s defeat (a very narrow one, it must be emphasized) was the culmination of longstanding grassroots pushback against his policies, just as Lulismo was cultivated through decades. If we are to advance a new kind of politics in the Philippines, are we capable of planning for 2028, and even 2034, as early as now? And can we recognize that both ideology and personality matter?

The most idiosyncratic thing about São Paulo would have to be the weather, which can swing from Christmas in Baguio to summer in Nueva Ecija. Most of the time, though, it’s pleasant, like January in Tagaytay. Staying in Bom Retiro—home of the largest Korean community in Latin America—one is reminded of the country’s ethnic diversity, which may have had notorious roots (Brazil was the last country in the Americas to abolish slavery)—but may yet lead to a truly “racial democracy.”

As the country enters a new presidency, and as World Cup fever sets in, I will leave this country with much saudade for its people—and esperança (hope) that we can strengthen our ties with them, one center of the world with another.