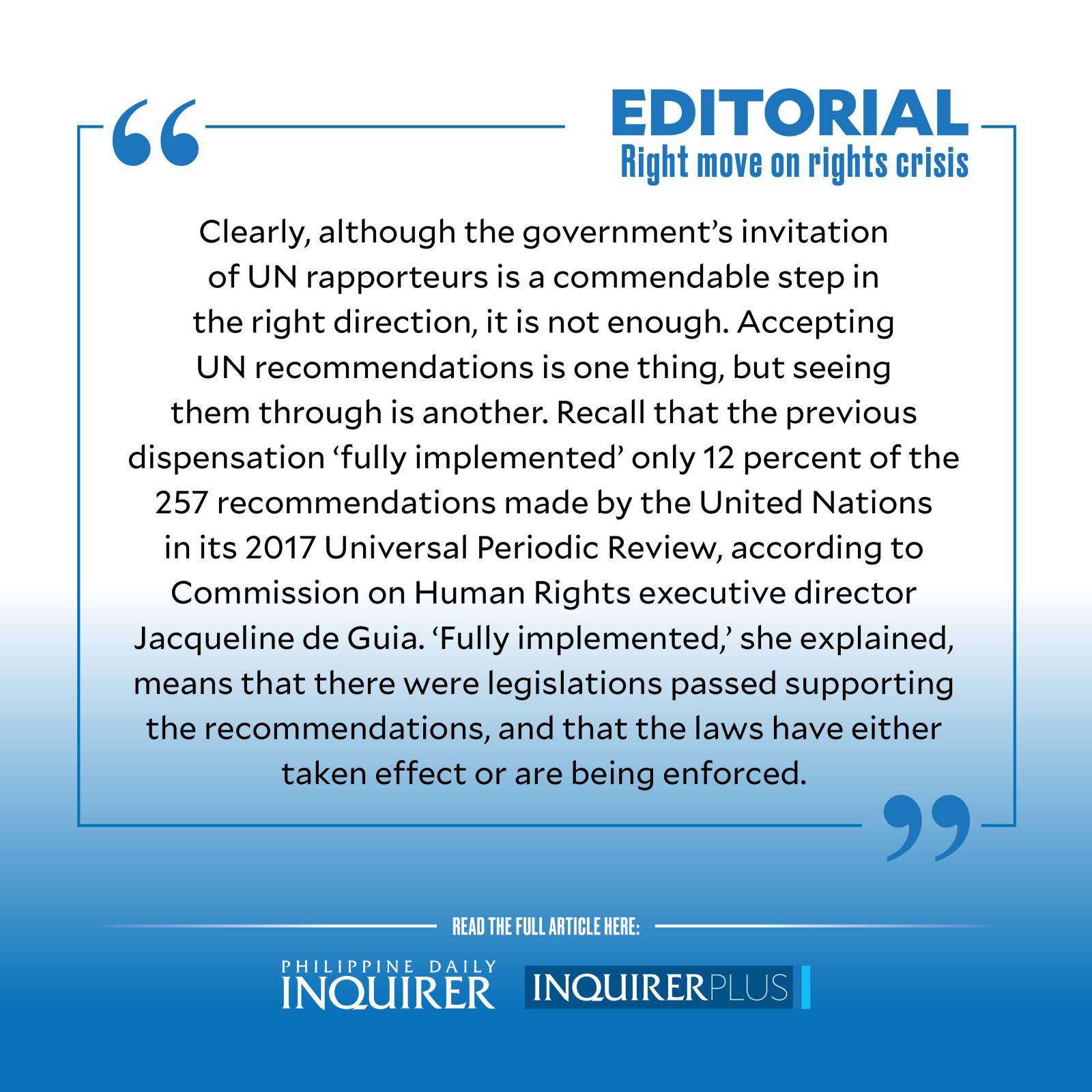 Justice Secretary Jesus Remulla’s announcement Monday that the Philippines has invited a special rapporteur on extrajudicial, summary, and arbitrary executions, as part of its capacity building under the United Nations Joint Programme (UNJP), is a most welcome and laudable development in the country’ appalling rights situation.

Morris Tidball-Binz, a physician from Chile who specializes in forensic science, human rights, and humanitarian action, is expected to visit the country next year. The government’s invitation, he said, shows that the Philippines is “a country open to suggestions, … does not deny that there are problems within the system … and [is] open to improving whatever situation there is.”

The invitation, Remulla said, was “more of a follow-up on an agreed program that we had in the UNJP … so that we can train more forensic pathologists in the country.” He pointed out that we have only two licensed and internationally recognized forensic pathologists—doctors Raquel Fortun and Cecilia Lim—with the rest being medico-legal experts.

The justice official’s “caring gesture,” as he describes the invitation, is in sharp contrast to his previous effusive and rosy pronouncements on the country’s rights situation before an international body, where he proclaimed in October that Red-tagging “is probably the essence of democracy.”

Remulla led a delegation to the UN Human Rights Council (UNHRC) on Nov. 14, and accepted 200 of its recommendations, while vowing to “examine” 89 others. Among the recommendations that the Philippines agreed to are not to revive the death penalty, reorient the “punitive approach” to the drug war, and conduct a thorough investigation into the deaths, threats, and harassment of journalists.

The Philippines, however, nixed the suggestion to abolish the controversial National Task Force to End Local Communist Armed Conflict, and merely said that the body notorious for Red-tagging would be put “under review.” The country was similarly lukewarm to the recommendation that the Philippines rejoin the 2002 Rome Statute after it withdrew from the International Criminal Court (ICC) founding treaty in 2018, following the ICC decision to investigate the blood-soaked drug war of the Duterte administration.

Clearly, although the government’s invitation of UN rapporteurs is a commendable step in the right direction, it is not enough. Accepting UN recommendations is one thing, but seeing them through is another. Recall that the previous dispensation “fully implemented” only 12 percent of the 257 recommendations made by the United Nations in its 2017 Universal Periodic Review, according to Commission on Human Rights (CHR) executive director Jacqueline de Guia. “Fully implemented,” she explained, means that there were legislations passed supporting the recommendations, and that the laws have either taken effect or are being enforced.

Agreed rights advocate Cristina Palabay, secretary general of Karapatan: “The Philippine government should walk the talk and acknowledge the wrongs that have been done.” There should be “time-bound indicators on this,” she said.

For a start, Remulla should seriously consider and address the reports from the ground of activist and civil society groups whose members bear the brunt and often violent consequences of being Red-tagged, instead of tarring these critics as out “to destroy the image of the country.” Linking them to “armed movements and terrorist groups” belies Remulla’s own statement about inviting the UN rapporteurs.

The CHR also urged the administration to push for measures that would reinforce rights mechanisms in the country, starting with passing the long overdue CHR charter which, according to its chair Richard Palpal-latoc, would strengthen the watchdog’s work as an independent and credible national human rights institute. Appointing CHR commissioners in an “open, transparent, consultative, and participative process” would be to the government’s advantage as well, he added, and would reflect on the administration’s willingness to bank on integrity rather than patronage in defending human rights in the country.

Just as urgent and definitely a boon to the country’s image as being “open” to global scrutiny is walking back the administration’s refusal to allow ICC investigators into the country. With only four criminal cases resulting from the DOJ’s investigation of only 52 out of thousands of drug- related killings under the previous administration, it is indisputable that our justice system is incapable and even unwilling to thoroughly look into the extrajudicial killings issue. We can certainly use all the help we can get.