Beyond consensus: The secret history of Asean | Inquirer Opinion

Beyond consensus: The secret history of Asean 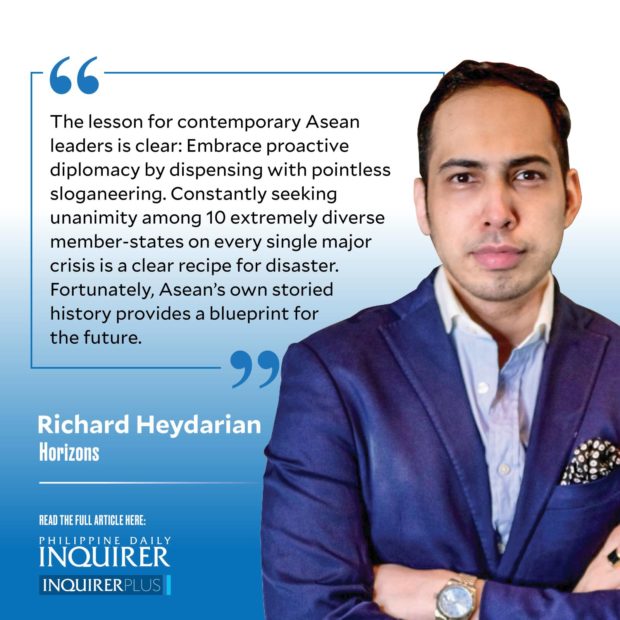 Bali—“[T]he United States and China must manage the competition responsibly and maintain open lines of communication,” declared US President Joseph Biden during his fateful summit with his Chinese counterpart on the sidelines of the G20 Summit in Bali, Indonesia. On his part, Chinese paramount leader Xi Jinping argued: “[T]he current state of China-US relations is not in the fundamental interests of the two countries and peoples, and is not what the international community expects.”

With both superpowers acknowledging the need for arresting a downward spiral in the world’s most consequential bilateral relationship, they agreed to resume a plethora of dialogue mechanism and cooperative regimes. By and large, the US and China seem to have, at least for now, pulled back from the brink of a full-blown “New Cold War,” especially following US Speaker Nancy Pelosi’s visit to Taiwan, which immediately triggered tit-for-tat muscle-flexing by the two superpowers in recent months.

And thus, Indonesia’s ultimate tropical paradise helped produce a much-needed détente, which is indispensable to global peace and post-pandemic recovery. The fragile “cold peace” between the US and China, however, doesn’t preclude a whole series of potential disruptions to regional integration.

In theory, the Association of Southeast Asian Nations (Asean) was established to precisely achieve what the Singaporean diplomat is advocating for. The hard truth, however, is that Asean is struggling to even deal with crises in its very own backyard.

Regional leaders effectively begged for external assistance during their latest summit, where Asean’s dithering “peace plan” for post-coup Myanmar was on the table. Nor has the regional organization made any significant step toward finalizing a legally binding Code of Conduct in the South China Sea.

Asean’s blatant inefficacy is often blamed on the regional organization’s insistence on the twin principles of “consensus” and “non-interference.” This “presentist” perspective, however, overlooks the actual history of the half-a-century-old organization.

Forged in the cauldron of Cold War, the founding members of Asean were, unlike their mediocre successors, actually extremely dexterous and geopolitically proactive in their regional diplomacy. Dear reader, let me briefly explain the most prominent cases.

When Vietnam invaded Cambodia in 1978, Asean leaders went so far as backing the just-ousted regime in Phnom Penh by ensuring the notorious Khmer Rouge maintained its seat at the United Nations.

Once the Indo-China wars ended, however, Asean leaders somehow redeemed themselves by pressuring the post-war Cambodian leaders, including erstwhile prime minister Hun Sen, to form a pluralistic government as a precondition for joining the regional organization. This is precisely why Cambodian opposition leader Sam Rainsy has openly thanked Asean, and especially Indonesia, for its role in democratizing his country through direct intervention.

Not only has Asean directly intervened in the affairs of regional states, but it has also proved most successful when it dispensed with pointless search for consensus on inherently divisive issues. The most prominent case is Asean’s role in directly assisting the International Force for East Timor (INTERFET) and the United Nations Transitional Administration in East Timor in the late-1990s through, inter alia, deployment of peacekeeping troops.

As then Thai Prime Minister Chuan Leekpai, who oversaw Asean’s chairmanship, put it, “member states which are prepared and willing can join the … INTERFET” without the need for securing Asean consensus; clearly, Indonesia, the former colonizer of East Timor, was not fully on board.

Meanwhile, the Asean Free Trade Area, which was signed ahead of schedule, is a testament to the wisdom of majority-based “Asean Minus X” decision-making formula. Moreover, a whole host of effective cooperative mechanisms against counter-terrorism and piracy, from the Malacca Strait to the Sulu and Celebes Seas, were also negotiated on a “minilateral” basis among like-minded member-states.

The lesson for contemporary Asean leaders is clear: Embrace proactive diplomacy by dispensing with pointless sloganeering. Constantly seeking unanimity among 10 extremely diverse member-states on every single major crisis is a clear recipe for disaster. Fortunately, Asean’s own storied history provides a blueprint for the future.