The Elephant Man in the Senate | Inquirer Opinion

The Elephant Man in the Senate 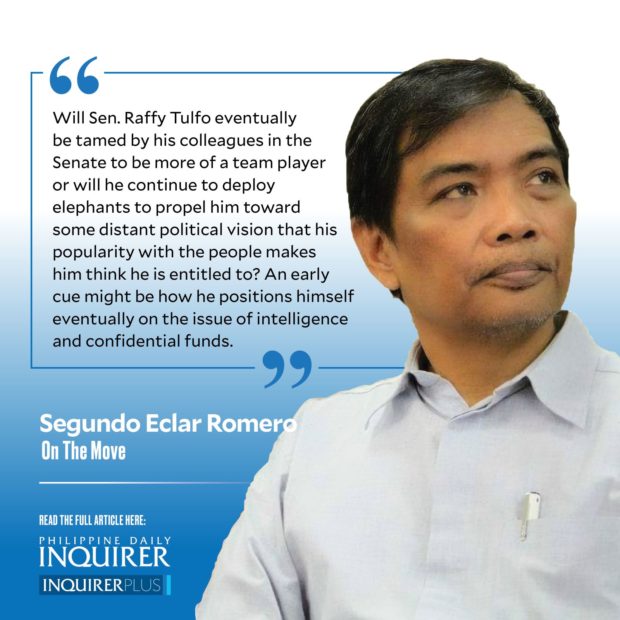 The “Messenger Model”: Should a politician as a representative elected by the people represent their sentiments and preferences exactly as these are communicated or revealed to him by the electorate regardless of his personal estimate of their soundness or wisdom? This model is best when the people are as educated and informed as the politicians themselves.

The “Lawyer Model:” Should the politician represent the interests of the people according to his best lights, given his upbringing, expertise, and experience? This model is best where the politician is from the true elite, vastly superior in knowledge, expertise, experience, maturity, and probity to the electorate.

It must be clear to the public that the operative goal in processing the 2023 General Appropriations Act is the venerable silent conspiracy among politicians to ensure their reelection in 2025 and in 2028. The money of government may be woefully insufficient to achieve the real development goals in the various development sectors, but they are more than sufficient to ensure the reelection of the decision-makers.

The shielding of government expenditures from the scrutiny of the public and the transparency and accountability agencies and mechanisms of government happens through “kupit” (sequestration) of large chunks of funds into intelligence and confidential funds and unprogrammed funds.

Into this budget deliberation drama wades one Raffy Tulfo, a neophyte senator, who makes senior senators and department secretaries miserable through his impertinent questions. The problem with Tulfo is he seems to be acting out the “Messenger” model of representation, speaking as if he were a farmer, a fisherman, a laborer, or an OFW, remonstrating with the high priests and priestesses of government on their behalf. He has stuck out like a sore thumb.

Tulfo does not seem to get the cue when Sen. Loren Legarda pointedly addresses him as the “neophyte” senator. Still, he asks those questions that constitute a herd of “elephants in the room.” Legarda and Labor Secretary Bienvenido Laguesma are confronted with illustrations of sleazy labor arbitration by the National Labor Relations Commission. Tulfo puts Environment Secretary Antonia Yulo-Loyzaga on her backfoot with searing questions on how indigenous peoples are shortchanged in the Kaliwa Dam project and how the Masungi Georeserve reeks of top-level corruption in the Department of Environment and Natural Resources. Sen. Cynthia Villar, being both chair of the agriculture committee and one of the biggest real estate magnates in the country, ends up in a defensive battle about the conversion of farmland into subdivisions. Tulfo raised eyebrows when he tangled off-tangent with Trade Secretary Alfredo Pascual on the sodium content of cup noodles. Tulfo also had verbal tussles with Sen. Grace Poe on the Department of Transportation budget and Sen. Sonny Angara on the Department of Public Works and Highways budget. Perhaps the most scathing criticism Tulfo reserved for the Department of Budget and Management which he said seemed to act like God in dispensing budgetary allocations.

What is Tulfo up to? Is he being “incredibly smart or incredibly stupid?” (Famous quote from the movie “Enemy of the State,” 1998). My guess is, Tulfo is playing it smart. He is parlaying the granular case studies of needy, desperate, and exploited people wronged by callous government and greedy politicians and businessmen to stab at the powerful windmills in the Senate and the executive branch. People have found snap relief and deliverance through his intercession with the powers that be and the bureaucracy in his Raffy Tulfo in Action YouTube channel that builds on the iconic “Ipa-Tulfo Mo” program on radio. His YouTube channel is the third-most subscribed Filipino YouTube channel as of 2021. Tulfo was third overall in the 2022 Senate race with 23 million votes.

Tulfo wields the sword of grounded authenticity against which senators find difficulty in citing pertinent information, statistics, and illustrative cases, often falling back on their limited personal experiences of the grassroots, a stark contrast with the high moral ground on which Tulfo appears to perch.

Will Tulfo eventually be tamed by his colleagues in the Senate to be more of a team player or will he continue to deploy elephants to propel him toward some distant political vision that his popularity with the people makes him think he is entitled to? An early cue might be how he positions himself eventually on the issue of intelligence and confidential funds.