White supremacy and the Filipino 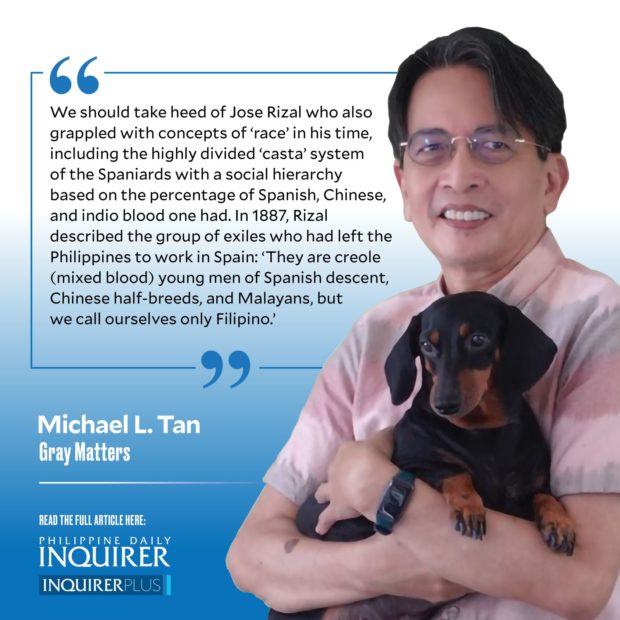 Asians living in the west, including Filipinos, have generally thought of themselves as exempt from racist violence from whites until the recent wave of violence perpetuated against them not just by whites but also by other people of color.

What isn’t recognized is that the root of the more violent forms of racism is White Supremacy, which goes further than discrimination against people who are not of the same skin color, and instead asserts the superiority of people with white skin, which in turn is used to justify extreme violence against anyone “of color.”

Racial discrimination is found across history, developing into theories about races and attributing races with particular personalities and capabilities. But an article last year that was published in the British newspaper The Guardian, “The invention of whiteness: the long history of a dangerous idea,” traces how white supremacy’s roots go back only to the 17th century.

At that time, Europe’s aristocrats had both white indentured servants and black slaves. The white servants were described as “Christian” to differentiate them from the black slaves.

With time, a growing dilemma that came about was justifying the continuing enslavement of slaves who had converted to Christianity.

The solution was to assert that even if the slaves converted, they remained vastly inferior to whites simply because of their color. This invention of whiteness and White Supremacy was made “scientific” through fields like anthropology, genetics, and, in the 20th century, psychology, resulting in books and “scientific” journal articles that went as far as arguing that blacks were of lower intelligence than whites.

W.E.B. Du Bois, the first African-American graduate of Harvard, wrote an essay in 1919 observing that in the Middle Ages, people regarded skin color “with mild curiosity.” This was to change in the 18th and 19th centuries, the concept of a superior whiteness described by Du Bois in religious terms: “of all the hues of God, whites alone is inherently better than brownness and tan,” leading “to curious acts.” (I thought of my dachshund, whose papers identify her as “black and tan” and of myself as brown.)

Those curious acts involved even governments passing laws to separate whites from people of color. It was not until 1967 for example, that the US Supreme Court finally abolished laws that banned inter-“racial” marriages, which affected Filipinos as well … thus the many Filipino men who never married in their long years of living and working in the US.

The ban on interracial marriage was a mild “curious act” compared to the lynching and murder of people of color, persisting to this day, worsening especially during the Trump administration. Some of the violence against Asians has been encouraged by claims that people of color are replacing whites (read debasing the quality of the white “race”).

Frantz Fanon, the Algerian psychiatrist and revolutionary, wrote in the 1950s about how colonialism led to dehumanization, mainly through “epidermalization,” making the colonized feel inferior by the darkness of their skin.

White Supremacy today is fanned by a growing sense of white inferiority. A joke going around the internet has Indian Prime Minister Narendra Modi being asked: “Who is in charge of the world?” Modi replies, “All I know is…” and then names 14 CEOs (chief executive officer) of huge American companies like Google, Microsoft, Adobe, Mastercard) and politicians like the new prime minister of the United Kingdom, Rishi Sunak, all of Indian descent.

Many, many years ago, shortly before being sent to study in the States, an uncle of mine called me for a pep talk: “Always remember, Mike, we Asians are smarter than Americans.”

Looking back, I see that pep talk as reverse supremacist racism. If we excel, especially when we live overseas, it is because adverse circumstances drive us harder to achieve.

We should take heed of Jose Rizal who also grappled with concepts of “race” in his time, including the highly divided casta system of the Spaniards with a social hierarchy based on the percentage of Spanish, Chinese, and indio blood one had. In 1887, Rizal described the group of exiles who had left the Philippines to work in Spain: “They are creole (mixed blood) young men of Spanish descent, Chinese half-breeds, and Malayans, but we call ourselves only Filipino.”