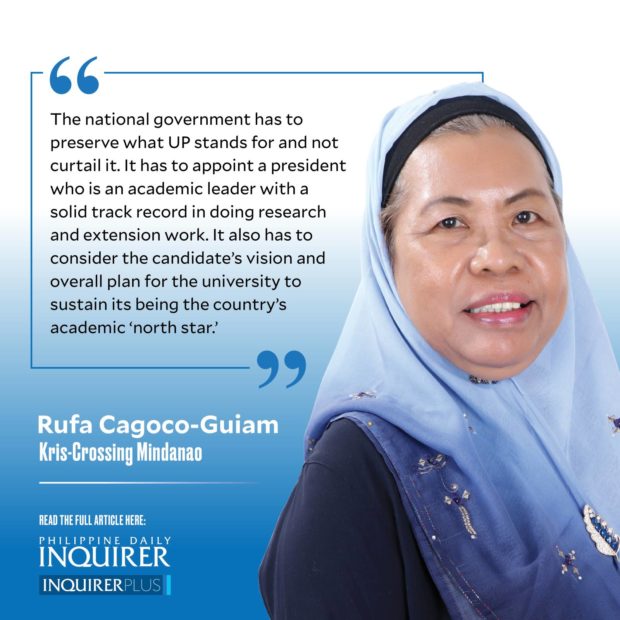 The academe plays a pivotal role in various aspects of a society’s development. It is also where many political leaders, bureaucrats, and technocrats started to hone various skills that have made them who they are today. Students learn to imbibe not only the actual teachings of their professors, but also catch their values, both desirable and unpleasant. As the old adage says, “values are better caught than taught.”

Some professors teach like preachers behind a pulpit; others choose the easy way out by assigning students to render reports on topics included in their courses’ syllabi. But a few professors are not only mentors; they also become the inspiration of their students as role models and influencers. In the latter category are professors who “walk the talk,” through their practice of doing research and extension work, the two other missions (aside from teaching) that academic leaders are expected to perform while in an institution of higher learning.

Being a professor is not a walk in the park; this status brings with it the responsibility of a public intellectual. Public intellectuals contribute to society’s development through the production of new knowledge (through research work) and the implementation of extension projects that aim to address a range of social development deficits. Among such deficits are related to the recurring violent conflicts in many parts of the country; the abject poverty of more than 20 million Filipinos; economic and political marginalization of the country’s indigenous peoples; curtailment of human rights through extrajudicial killings; exposure and vulnerability of poor, agricultural communities to extreme weather events and climate change consequences and many others.

Doing research and publishing the results of research projects are sine qua non of being an academic. Universities and other institutions of higher learning consider these two as the gateway toward getting not only permanent tenure, but also being granted a much higher academic rank that means higher salaries and additional incentives.

But extension work is the heart of being a public intellectual. When professors lead extension projects to address governance deficits, they share their expertise with communities they are part of. They also influence members of society to contribute to overall nation-building, leading toward more social cohesion, therefore paving the way for what some peace studies theorists call “pragmatic peace.” Other peace scholars call it “peace by piece.”

For many Mindanao-based academics, the University of the Philippines (UP) Diliman is like their “north star” not only in instruction but also in doing research and extension work that are the hallmarks of an academic institution. As an institution imparting knowledge and values that are cherished in a thriving and vibrant democracy, UP, especially its main campus in Diliman, provides the yardstick to measure both academic excellence and social relevance. As a public institution of learning, UP Diliman nurtures basic values that we cherish as a democracy: freedom of speech, deep concern for universal human rights, and other essential characteristics of good governance: transparency and accountability, the rule of law, and the importance of people participation and inclusive governance. These are what we call “tatak UP.”

The national government has to preserve what UP stands for and not curtail it. It has to appoint a president who is an academic leader with a solid track record in doing research and extension work. It also has to consider the candidate’s vision and overall plan for the university to sustain its being the country’s academic “north star.”

More importantly, the national government should consider the candidate’s stance in many pressing and urgent issues; among them, the university’s contribution to the current peace architecture being forged in the Bangsamoro Autonomous Region in Muslim Mindanao. While UP is based in Diliman, it has an institutional linkage to the Muslim communities in Mindanao through its Institute of Islamic Studies (IIS). Through the years of IIS’ existence, it has produced innumerable graduates, now leaders and professors in various Mindanao universities and colleges.

As an academic institution, UP needs a president who is a thought leader, a public intellectual, as I have described earlier—not a politician or a sycophant of the current primary resident in Malacañang.