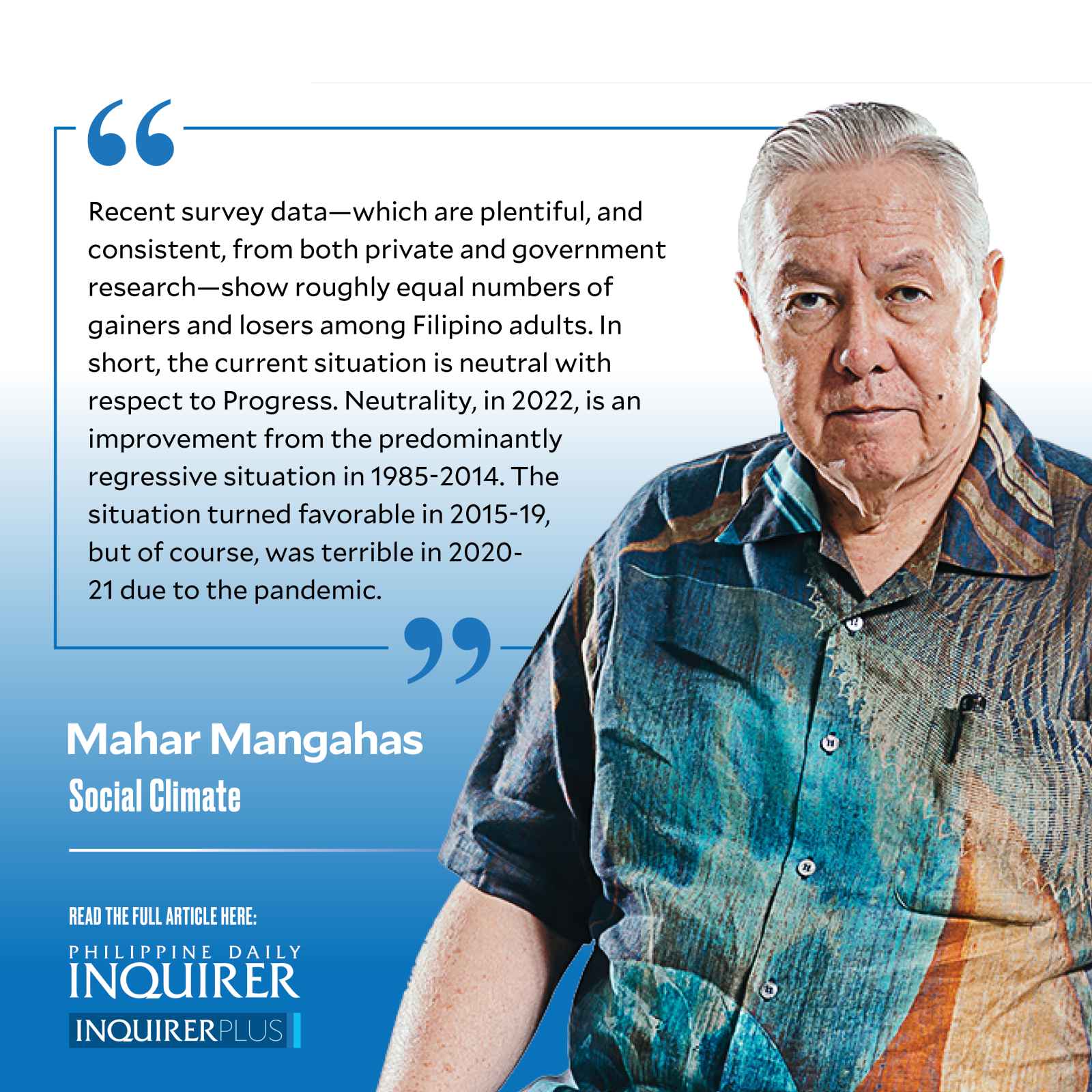 Last week, I argued for a very simple, reliable, and practical indicator of Progress, with a capital P: Progress is a situation when more people say that their Quality of Life got better, than say it got worse, compared to a year ago.

Recent survey data—which are plentiful, and consistent, from both private and government research—show roughly equal numbers of gainers and losers among Filipino adults. In short, the current situation is neutral with respect to Progress. Neutrality, in 2022, is an improvement from the predominantly regressive situation in 1985-2014 (see “Gainers don’t exceed losers yet,” 11/12/22). The situation turned favorable in 2015-19, but of course, was terrible in 2020-21 due to the pandemic.

The table (see right) has recent Social Weather Stations data that distinguish progress of people in general from that of workers in particular. It shows that the current increase in real (i.e.,

corrected for inflation) per capita gross national product (GNP) is accompanied by roughly equal numbers of Gainers and Losers among those in the work force.

In the SWS quarterly surveys, the Gainers/Losers question is asked of all respondents. The respondents are a statistically representative sample of adults (A), i.e., age 18 and up. In June 2022, 67 percent of them (B) were in the workforce—53 percent with jobs (B1), plus 14 percent jobless, seeking work (B2)—while 33 percent were not in the workforce (C), being house partners, students, retirees, disabled, etc.

For each category, the table shows the percentages whose QOL got better, worse, or did not change in the last year. In the last column is Net Gainers per category: very close to zero (neutral) for all adults, all workers, workers with jobs, and non-workers, but a significantly negative -11 for the jobless. This implies that the incomes that recently increased in line with the growth in GNP were not predominantly the incomes of the working class.

GNP measures total production directly, but measures total income indirectly. GNP is the aggregate money value of production, based on data from producing units, both formal (business firms) and informal. The government conducts regular surveys of various production sectors, such as manufacturing, mining, agriculture, fishing, etc. The value of a firm’s or farm’s production is the value it adds to the cost of the inputs it purchased from firms preceding it in the value chain; such purchases are not attributed to the firm being surveyed, to avoid double-counting.

Surveys of production for use in estimating GNP are designed to distinguish the value embodied in purchased inputs from the value added to those inputs by the operations of a producer. This value-added is also the sum of the wages of rank-and-file workers, the salaries and compensation of other employees, and the income or profits of the owners of the firm. Value-added in production equals the sum of the earnings from production, by accounting principles.

GNP is also the total income of those engaged in a firm’s production but is not measured by asking about personal incomes. I think the government, if it wanted to, could break down its value-added data into the bills for wages, salaries, consultants’ fees, property rentals, interest payments, dividends, profit-sharing, and so forth. After all, growth in GNP makes room for sharing it across all the primary factors of production.

If production grows faster than employment, then productivity per worker likewise grows. I think workers deserve to be rewarded accordingly. But is there any sign of real wages rising? Are they simply stable, or could they even be falling (see my “Stagnation of real wages” and “Social statistics gone missing,” 3/3/18 and 6/4/22)?