A climate emergency for indigenous peoples 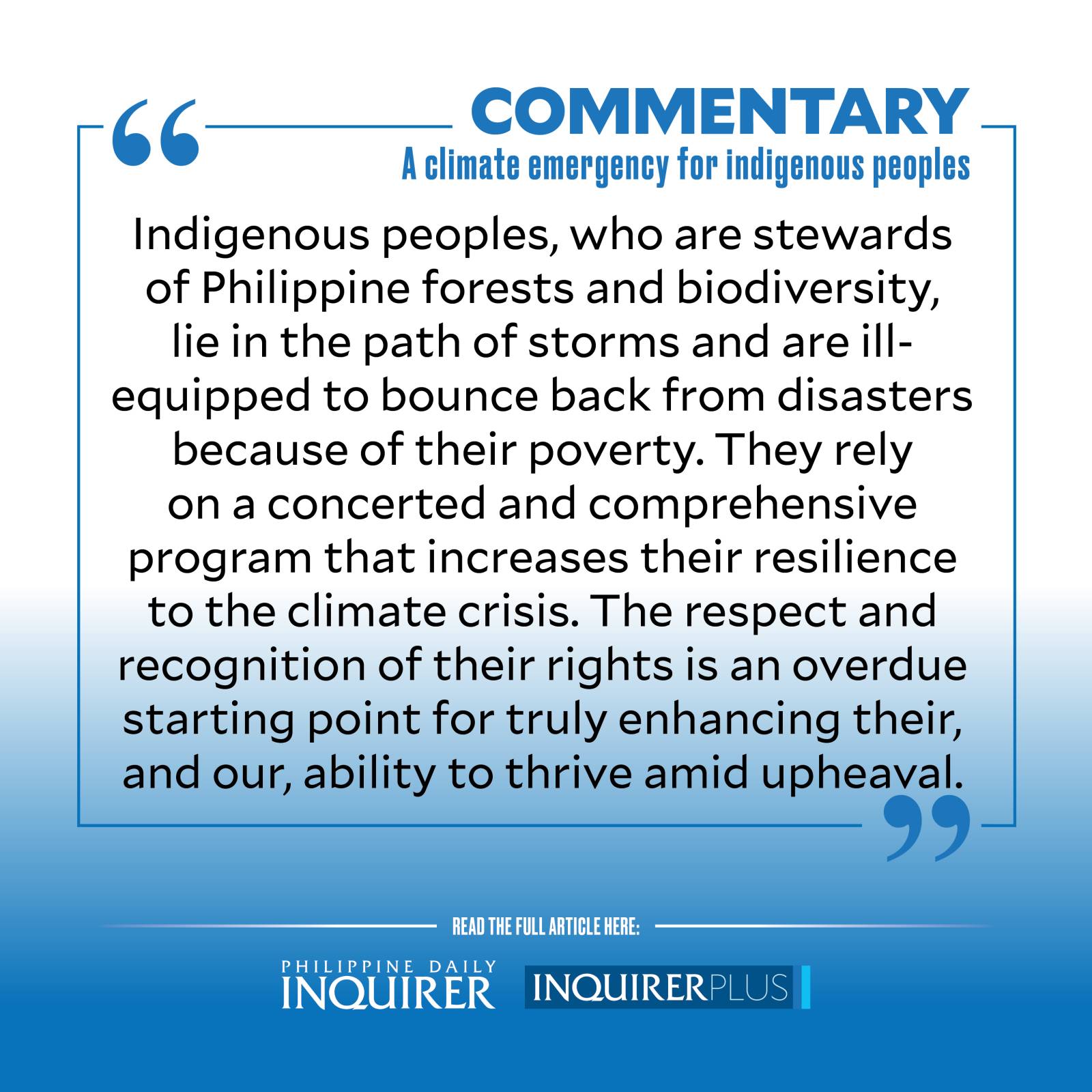 At the height of Supertyphoon “Karding” (international name: Noru), public gratitude for the Sierra Madre mountain range went viral across social media for keeping it at bay and protecting millions of residents in Metro Manila.

When more than a hundred died from flash floods and landslides with Severe Tropical Storm “Paeng” (Nalgae), 46 dead and four missing from the indigenous Teduray Lambangian communities in Maguindanao, President Marcos Jr. seemed to only just realize then that, in his own words: “may climate change talaga (there really is climate change),” prompting him to call for tree planting.

From the Sierra Madre range to the Daguma range of Maguindanao, indigenous communities are in these forest frontlines where the climate crisis hits. Cross-referencing government disaster situation reports with records of issued ancestral domain titles, we estimate at least 136 ancestral domains (ADs) with more than 689,000 indigenous people (IP) were affected by five successive typhoons since the end of September. Clearly, indigenous peoples lend a hand in nurturing these critical landscapes and are at the same time closest to the site of peril.

The recently launched State of Indigenous Peoples Address 2022 report revealed that almost half of all ADs are threatened by environmentally destructive projects such as big mines, logging plantations, fossil fuels, and infrastructure.

ADs and other indigenous territories harbor 75 percent of our country’s last remaining forest cover; protecting ancestral lands is crucial to protecting our carbon sinks and natural defenses against storms and floods. Ancestral lands are often the last line of defense forests against extractive, destructive projects.

Despite their role in safeguarding our watersheds, IPs have been chronically marginalized and are thus more vulnerable to the impacts of the climate crisis. In our report, we found that 73 percent of IPs belong to the 40 percent poorest in our population. IPs also face significant gaps in accessing social services such as water, electricity, and food security, among others.

Barely able to eke out enough to fund one planting season, one disaster, be it drought or storm, can wipe out a community’s months of toil. There is a reason such a season is called tiempo muerte or the dead season. It used to be that elders in the community could predict when it comes; with global warming, the tiempo comes more unpredictably, driving communities to greater precarity.

We should certainly do more than just tree planting.

Current government policies run the risk of exposing IPs to greater hazards. Among these, the national energy plan promotes renewable energy sources, and thermal coal, nuclear, and other dirty or destructive power sources despite pronouncements of going “green.” Both renewable and nonrenewable energy target ancestral domains as their site of operation.

There are no indications of curbing large-scale mining, agro-industrial plantations, and dams, which are often situated in ancestral lands and operate without the consent of IPs. Not only are these sites of environmental degradation, but conflicts also often occur in consonant with these projects. It has led to a situation where violence is often not the result of but the state in which an extractive project is made possible.

Meanwhile, the return of public-private partnerships, especially for infrastructure, would once again open indigenous territories to corporate encroachment. In sum, the support for dirty energy and land grabbing does not complement the other pronouncements of the government to combat the climate crisis.

The recent landmark report by the Commission on Human Rights on climate change and human rights recommended the passage of a law seeking accountability from businesses for climate loss and damage. We call on our legislators to urgently act on this so that IPs may find concrete remedies and redress.

Indigenous peoples, who are stewards of Philippine forests and biodiversity, lie in the path of storms and are ill-equipped to bounce back from disasters because of their poverty. They rely on a concerted and comprehensive program that increases their resilience to the climate crisis. The respect and recognition of their rights is an overdue starting point for truly enhancing their, and our, ability to thrive amid upheaval.

E.M. Taqueban is an indigenous rights lawyer and executive director of the Legal Rights and Natural Resources Center, a legal, policy, and advocacy organization that supports indigenous peoples’ access to justice and meaningful participation in policy reform and democratic governance.