A brighter future for Vinice 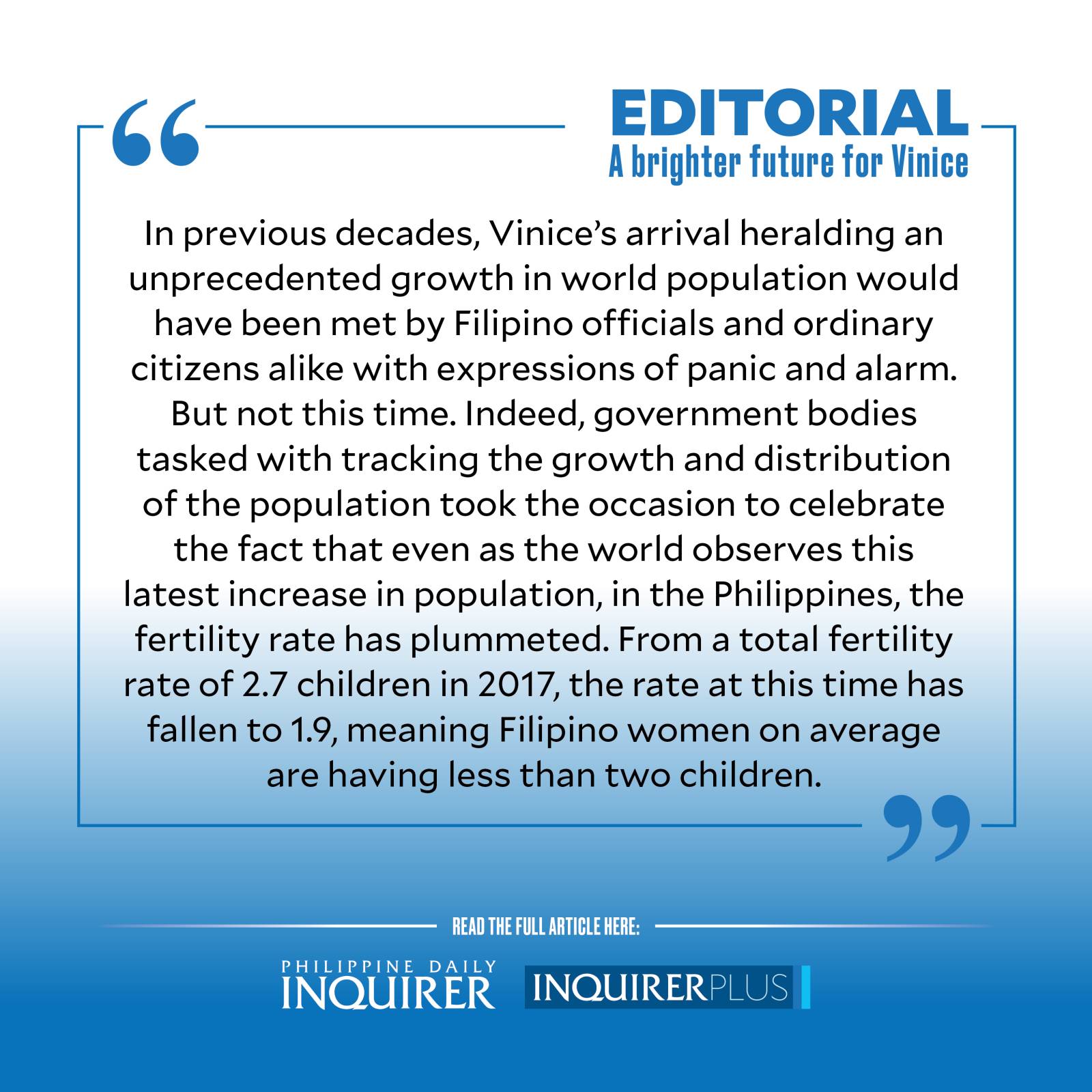 Popularly known as the country’s “baby factory,” the Dr. Jose Fabella Memorial Hospital in Manila was the scene of the birth of the world’s “symbolic” eight billionth person.

Fabella is the “national maternity hospital,” established in 1951 where daily hundreds, if not thousands, of expectant mothers queue up waiting to deliver their infants.

One of these babies, a girl named Vinice Mabansag, was singled out last Tuesday to symbolize all other babies born around the same time.

It is “an occasion to celebrate diversity and advancements while considering humanity’s shared responsibility for the planet,” United Nations Secretary-General António Guterres said in a statement.

But while many took the occasion to celebrate the steps made toward improving human development, with people living longer thanks to improvements in public health, nutrition, personal hygiene, and medicine, others worry that eight billion humans “is too many for planet Earth.”

Even as leaders of the world have been meeting to set shared goals and steps toward halting, if not reversing, environmental crises such as climate change and global warming, some wonder if growing populations threaten the earth’s survival.

But other experts say the bigger problem is the overconsumption of resources by the wealthiest people. As Natalia Kanem, head of the UN Population Fund, puts it: “The sheer number of human lives is not a cause for fear.”

In previous decades, Vinice’s arrival heralding an unprecedented growth in world population would have been met by Filipino officials and ordinary citizens alike with expressions of panic and alarm. But not this time.

Indeed, government bodies tasked with tracking the growth and distribution of the population took the occasion to celebrate the fact that even as the world observes this latest increase in population, in the Philippines, the fertility rate has plummeted. From a total fertility rate of 2.7 children in 2017, the rate at this time has fallen to 1.9, meaning Filipino women have less than two children on average.

A news report notes that from six children per woman during the 1970s, the country’s fertility rate has been on the decline, although “the decline from 2017 to 2022 was the sharpest ever recorded,” said the Commission on Population and Development (Popcom).

More significantly, the latest figure puts the country within the “replacement fertility level” of 2.1 children, which means a couple’s two children simply replace their parents when they pass on, “just enough to sustain the population level.”

This decrease in fertility level is also partly due to a change in attitudes toward child-bearing and family size. Where before, Filipino couples, especially the men, viewed the ability to sire and bear children as proof of their masculinity or maternal ability, these days, they seem to be taking a more cautious approach toward parenthood.

The same survey upon which the latest fertility figures were based revealed that one in two currently married women said they no longer desire more children, while 17 percent want to delay their next childbirths for two or more years.

This significant decline in total fertility offers both an opportunity as well as a challenge, says Popcom officer in charge Lolito Tacardon. “On one hand, this can be considered as a ‘breakthrough’ for the country’s programs on population and development as well as family planning.” But, on the other hand, as it stands, the Philippines’ latest total fertility rate is now comparable to those of upper-middle-income countries’ 1.8 children and Thailand at 1.5 children.

In the Asean region, the Philippines has now the third-lowest after Singapore’s 1.1 children, lower than the Asian average of 2.2, and is comparable to Latin America’s and the Caribbean’s, which is at 2.0 children.

Noting that the country is now undergoing a “demographic transition,” the Popcom official said the focus “should now be on ensuring that the quality and capacity of the country’s human resources are enhanced. At the household level, lower fertility also means greater opportunity for personal development of couples and individuals, which can redound to more savings and investments.”

Though Baby Vinice, who hails from a family residing in Tondo, still faces daunting challenges, given the poverty around her and the curtailed opportunities she may confront, the future seems bright for her. Or at least more optimistic than it did for many of the children who came before her and had to hurdle barriers born of their circumstances and the consequent lack of opportunities.