The need for intensified watershed planning 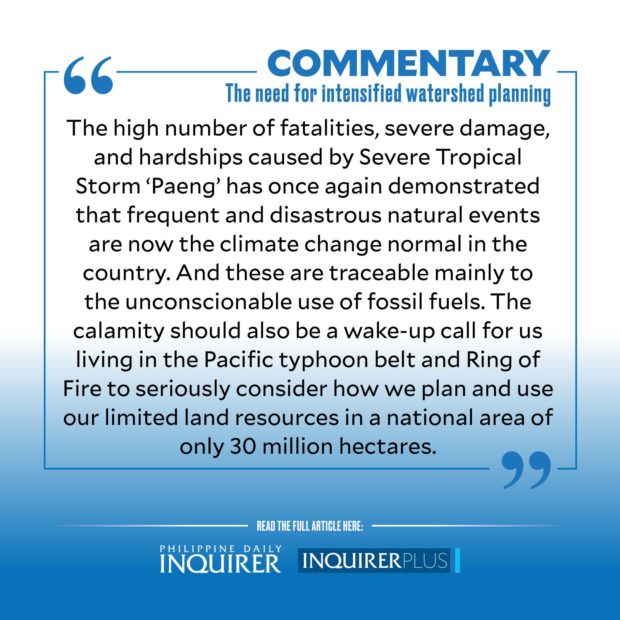 The high number of fatalities, severe damage, and hardships caused by Severe Tropical Storm “Paeng” has once again demonstrated that frequent and disastrous natural events are now the climate change normal in the country. And these are traceable mainly to the unconscionable use of fossil fuels. The calamity should also be a wake-up call for us living in the Pacific typhoon belt and Ring of Fire to seriously consider how we plan and use our limited land resources in a national area of only 30 million hectares.

The yearly occurrence of destructive typhoons should force us to consider a more environment-oriented land use planning other than the comprehensive land use planning process being promoted by the Department of Human Settlements and Urban Development for local government units (LGUs). I am referring to the urgent need for what is called the ridge-to-reef or watershed planning approach that involves planning for land areas that encompass many LGUs as a way of effectively reducing the disastrous effects of hydro-meteorological hazards like floods, droughts, landslides, and storm surges; anthropogenic hazards that are caused by human action or inaction, as well as geologic hazards, including earthquakes, volcanic eruptions, and tsunamis (tidal waves).

Ridge-to-reef or watershed planning involves a holistic approach that takes into consideration all the environmental entities from the ridge, or top of a mountain range, down past the shoreline to the coral reefs fronting the land. A watershed consists of the entire drainage area of a river which is bounded by surrounding highland ridges, and which are usually drained by abutting tributary streams that form their own sub-watersheds. Thus, a watershed will include all or parts of a number of towns within its boundaries that are delineated by surrounding ridges. As a mountainous country, the Philippines has 412 river basins or large watersheds, of which 19 are considered major river basins.

It should be pointed out that of the total cited above, 130 are considered critical watersheds that demand either protection or rehabilitation since they support existing and proposed critical infrastructure facilities.

Within a watershed, holistic and ecologically sound land use planning can be practiced by delineating proper uses for the land-based on slope groupings, namely: 0-18 percent for settlement, agricultural, and fishery uses; 18-50 percent for regulated uses such as controlled timber harvesting, mining, grazing, upland farming, and tourism, and over 50 percent for protected forest.

If strictly observed under the principles of multiple use and sustained yield, these land use delineations will significantly reduce flooding, landslides, and siltation of rivers and coral reefs. Building dams can also provide more uses for a watershed as they regulate water flow and collect rainfall for producing domestic, industrial, and irrigation water, as well as hydroelectric power.

Currently being implemented is the Department of Environment and Natural Resources (DENR) Administrative Order No. 2021-41, or the Guidelines in the Creation of Watershed Management Councils, which serve as oversight and advisory bodies on watershed planning and program/project implementation. Their major function is to prepare and implement watershed management plans with the participation of government and nongovernment organizations.

However, a policy forum conducted by the DOST-PCAARRD in July 2022 observed that the approach has failed to gain much recognition, nor has it been implemented sufficiently because of inadequate understanding and appreciation of the concept; the problem of sustaining interest and participatory enthusiasm among stakeholders; conflicting mandates among government agencies; the financial requirements of the program, and the lack of political will among decision-makers.

Pending the adjustments to be made, short-term moves that can and need to be done now include Congress’ substantial augmentation of the DENR’s proposed budget. This can be used to hire more personnel that will, in turn, jumpstart the following activities: delineation of terrain slope categories with markers; reforestation of denuded forests; guarding of the protected forests, and conduct of intensified information, education, and communication campaign among watershed stakeholders. This is one way to start fleshing out President Marcos Jr.’s loud call for people to plant trees.

Meliton B. Juanico is a retired professor of geography at the University of the Philippines Diliman and a licensed environmental planner.