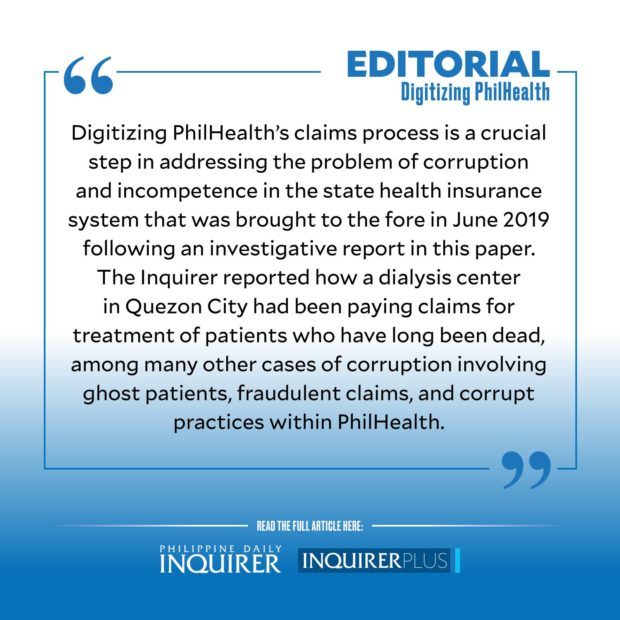 Early this month, an Aboitiz Group-led consortium announced it had submitted a P1-billion unsolicited proposal to digitize the claims process of the corruption-plagued Philippine Health Insurance Corp. (PhilHealth).

Aboitiz InfraCapital president Cosette Canilao said, in a report in this paper, that the group teamed up with UBX, its fintech arm, and technology solutions provider Unisys in submitting the proposal to PhilHealth. The consortium will engage the services of Aboitiz Data Innovation (ADI) which uses data science and artificial intelligence to solve the problems of companies and institutions.

Aboitiz Group president Sabin Aboitiz said the PhilHealth project is one way the group can help in the digitalization and innovation initiatives of President Marcos Jr.

“It’s not a big project [in terms of amount] but it’s one that can render significant service,” Canilao said on the sidelines of the launch of ADI in Singapore.

Digitizing PhilHealth’s claims process is a crucial step in addressing the problem of corruption and incompetence in the state health insurance system that was brought to the fore in June 2019 following an investigative report in this paper.

The Inquirer reported how a dialysis center in Quezon City had been paying claims for treatment of patients who have long been dead, among many other cases of corruption involving ghost patients, fraudulent claims, and corrupt practices within PhilHealth.

The report paved the way for a Senate investigation in 2019 where former PhilHealth executives testified and identified a “mafia’’ led by eight senior PhilHealth officials who allegedly aided hospitals and health clinics in defrauding the agency of billions of pesos.

PhilHealth insiders testified that the syndicate composed of PhilHealth’s executive committee members pocketed as much as P15 billion through various schemes, including the release of funds through the interim reimbursement mechanism (IRM), the controversial system for advanced payments for certain hospitals. PhilHealth later claimed the P15 billion had been reimbursed.

The Senate recommended filing of charges against then Health Secretary Francisco Duque III, PhilHealth chief Ricardo Morales, and several officials after finding evidence of a “conspiracy to bankrupt PhilHealth of its funds and resources.”

Morales and several officers were also charged with graft by the National Bureau of Investigation for the release of P33.8 million from the IRM intended for fortuitous events like the COVID-19 pandemic but was cornered by one dialysis center.

But despite all these recommendations, not much has been heard about the prosecution of the corrupt PhilHealth officers or the avowed reform measures by succeeding PhilHealth appointees.

At the height of the pandemic, private hospitals threatened to cut off ties with PhilHealth over its failure to pay mounting legitimate claims of PhilHealth members.

It was clear, however, that PhilHealth cannot be trusted to conduct its own “cleansing” as even its planned purchase of an ICT equipment in 2019 was found out to have been “grossly overpriced.”

Thus, the initiative from the private sector experts on technology solutions is a much-welcome move to purge PhilHealth of the inefficiency in its system, which allowed its corrupt bureaucracy to plunder its resources.

It is a timely and necessary proposal that the government must seriously consider if it wants to fix the systemic corruption, inefficiency, and incompetence that threaten the financial health and viability of PhilHealth.

As Aboitiz InfraCapital’s Canilao said, the unsolicited proposal of the consortium will make PhilHealth’s claim process more efficient and eliminate the fraudulent claims.

However, this laudable initiative won’t kickstart until a permanent health secretary has been appointed to make decisions. PhilHealth is an attached agency under the Department of Health (DOH), with the health secretary acting as ex-officio member of its board of directors. Mr. Marcos has designated as DOH officer in charge its undersecretary and spokesperson Maria Rosario Vergeire, who has disclosed she preferred to stay in the DOH until her retirement instead of becoming the health secretary, whose term is coterminous with the appointing power or can be changed anytime.

The President’s inability to appoint his full-fledged health chief had been a puzzle, since navigating the country out of the pandemic is obviously the most urgent national concern.

In the absence of the key decision-maker in the DOH, timely and necessary initiatives such as saving PhilHealth from its own corruption and mismanagement will not happen.