Anthropology and the archipelago | Inquirer Opinion

Anthropology and the archipelago 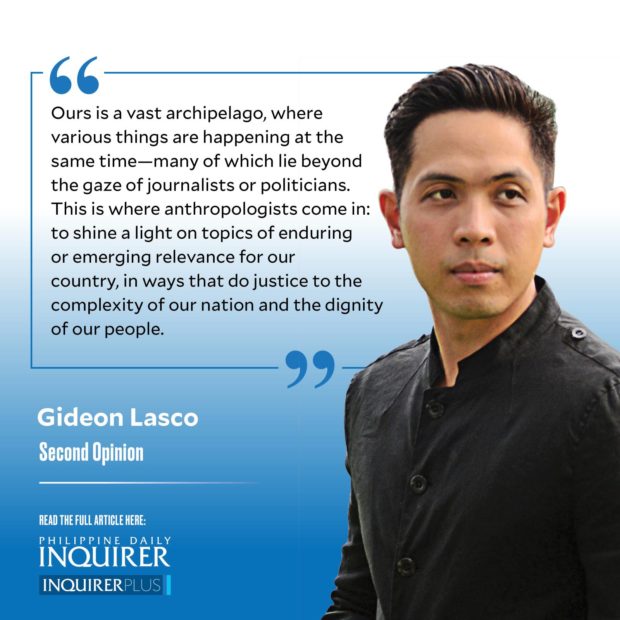 If one were to look at the prevailing public discourse in our country, certain topics loom large: disasters like Severe Tropical Storm “Paeng,” the COVID-19 pandemic, and the first few months of the Marcos Jr. presidency.

But ours is a vast archipelago, where various things are happening at the same time—many of which lie beyond the gaze of journalists or politicians. This is where anthropologists come in: to shine a light on topics of enduring or emerging relevance for our country, in ways that do justice to the complexity of our nation and the dignity of our people.

All of these topics came to the fore during the recently concluded 44th annual conference of Ugnayang Pang-Aghamtao (UGAT), the national association of anthropologists, held in Boac, Marinduque, on Oct. 26-28. Themed “Kapuluan: Anthropology in the Archipelago” and hosted by the Marinduque State College, the hybrid conference foregrounded the country’s “islandness,” while also serving as a venue for anthropologists in and of the Philippines—and beyond—to share their latest research and insights.

As an anthropologist myself, I always tell my students that my anthropological thinking begins with a sense of wonder for the world—and some of the presentations stimulated this sense of wonder. Janine Ochoa, for instance, evoked a distant past when Palawan was a land of tigers, and when Luzon was home to a host of mammalian fauna, from rhinoceros to giant cloud rats, while Alfred Pawlik used a host of data from Mindoro to reconstruct how the first humans who reached the country adapted to a new ecosystem. For their part, Andrea Malaya Ragragio, Myfel Paluga, and their colleagues unearthed the richness of the epics in Mindanao’s Pantaron Zone, finding unlikely connections between highland communities and Austronesian maritime traditions.

I am quick to add that anthropology must be infused with a sense of social justice, and this, too, was reflected in many of the presentations. Emmanuel Sumugat, for instance, spoke about how farmers in Matanao, Davao del Sur, end up investing in Ponzi schemes, interrogating “the conditions that created a space for these Ponzi schemes to thrive.” Meanwhile, Zhea Katrina Estrada spoke of the potentials that lie in engaging young people in “tokhang”-affected communities through community organizing, and UGAT elder Mary Racelis raised informal settlers’ “right to the city.”

Many of the presentations actually spoke to today’s headlines and most pressing challenges. In a panel on “Indigenous notions and practices in calamities,” Francesca Mauricio and Danielle Casipit shared how residents of La Trinidad, Benguet, mobilize local knowledge and practices to cope with landslides, while Lorylie Crisostomo described how people in Cebu utilize traditional water sources during times of disaster. Dennis Abarientos examined how tokhang exacerbated the exclusion of urban communities, while Arnold Lapuz analyzed Manila’s dolomite beach as “invention of paradise.”

Contrary to some stereotypes, anthropologists also study contemporary practices, including those that take place in virtual or digital spaces. One of the keynote speakers, Crystal Abidin, spoke of how influencers “function as important conduits of intercultural knowledge and exchange,” while Gino Paradela described the rise of “online babaylans” for whom their internet-based practice is a “means of personal empowerment.”

Thinking of the Philippines as an archipelago necessitates acknowledging our precariousness as part of an imperiled world. Fittingly, many of the panels touched on ecological issues—including our being in community with other species. For instance, Efenita Taqueban discussed the “sachet economy” that drives people to unsustainable forms of consumption, while Thea Kersti Tandog and Mary Jill Ira Banta described how the “agroecology” being taught in lumad schools may hold emancipatory value for indigenous communities. Thought-provokingly, Alyssa Paredes used a campaign in Davao City against the use of aerial pesticides as a starting point to think about how humans and non-humans can achieve what she called “coalitional justice.”

Ultimately, the over 120 presentations at the UGAT conference remind us of the need to value the geographically, socioeconomically, and politically marginalized: an imperative that extends far beyond anthropology to hopefully influence the way our leaders and ordinary citizens alike think about development, governance, as well as our overall place in the world.

As Eulalio Guieb III reminded us in his keynote lecture, “The small, the little, the shallow, and the local are, indeed, huge, big, deep, and global.”