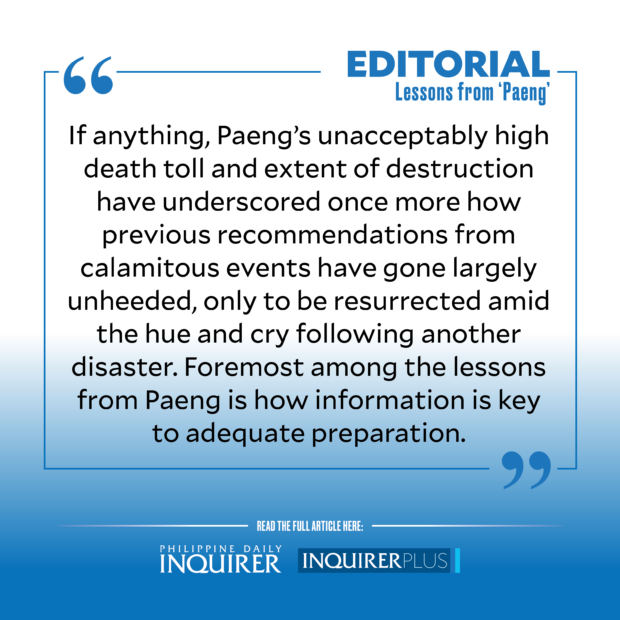 With 18 to 20 typhoons making landfall and wreaking havoc in the country every year, you’d think we would have mastered the drill by now. Foresight borne of repeated experience would have guided preparations on the ground and enabled us to survive each onslaught with the least number of casualties and damage to crops and property. But Severe Tropical Storm “Paeng”—with at least 150 dead, 36 missing, at least P2.74 billion worth of crops lost, and hundreds of thousands affected across 64 provinces—proved otherwise, with even President Marcos Jr. asking “Why were they (people) not evacuated? Why were there so many casualties?” upon hearing the extent of the typhoon’s devastation.

True, there were mitigating factors behind the calamitous impact of Paeng, with disaster officials pointing to “a tragic combination of continuous rains from the approaching tropical storm, deforestation, and silted rivers for the floods and landslides that swamped many parts of the country.” Local officials also deflected blame, saying they were not warned early enough; the information given was insufficient; the typhoon veered and changed course, and their area was seldom visited by storms so the flash floods and landslides caught them by surprise. As for the lives lost, they protested that many families had refused to leave their homes for fear of losing what little they had. There were no safe shelters for the evacuees either, as entire barangays were inundated.

Not that we haven’t heard all these before in the wake of previous typhoons just as powerful. If anything, Paeng’s unacceptably high death toll and extent of destruction have underscored once more how previous recommendations from calamitous events have gone largely unheeded, only to be resurrected amid the hue and cry following another disaster.

Foremost among the lessons from Paeng is how information is key to adequate preparation.

In the face of Paeng’s fury, people have been asking, “Whatever happened to Project NOAH?” Launched in 2012, the Nationwide Operational Assessment of Hazards, which the Duterte administration defunded in 2017, “generates initial assessment reports for seismic, volcanic, and hydro-meteorological hazards to help the public prepare for possible impacts,” notably by identifying sites that present geographical risks. Tools such as hazard mapping that Project NOAH and the Philippine Institute of Volcanology and Seismology’s HazardHunterPH provide are a life-saver, as they inform locals which areas to avoid and which routes to take if they need to evacuate.

To disseminate other crucial information, local government units (LGUs) can also enlist younger community members to create flyers and graphic materials that offer tips on best practices during disasters. LGUs should keep communication lines open as well, with hotlines and emergency numbers that can link residents to police, hospitals, and local disaster and rescue groups.

The Marcos Jr. administration should also restore its budget cut to the Department of Science and Technology (DOST), whose proposed P44.17-billion allocation for 2023 was slashed by P20.11 billion. The Philippine Atmospheric, Geophysical and Astronomical Services Administration weather bureau, which is under DOST, can certainly use more funds to upgrade its forecasting tools for more accurate reports.

Another lesson from Paeng is how investing in permanent shelters for evacuees is crucial to minimize casualties. Setting up facilities with enough privacy, working toilets and kitchens, as well as space to store relief goods, tents, rescue boats, and other disaster-related materials, can go a long way to encourage people to evacuate early. As would roving community patrols to guard against looting and other crimes of opportunity.

A third lesson in saving lives is to enforce building standards even among homes to prevent strong waves from toppling concrete walls and other structures—including river barriers—that lack reinforcement. Appropriate land use is just as crucial, as flood plains and coastal areas have often been converted into homestead—with disastrous results.

Probably the most important lesson is the need for constant, consistent, and vigilant environment protection, given that the Philippines has been identified as one of the most vulnerable countries to climate change and other natural hazards, given its geographic location.

The President himself noted during his aerial survey of areas devastated by Paeng how balding mountains have made landslides inevitable after torrential rains. Tree planting and reforestation are an urgent priority, he said.

Indeed, unchecked logging and mining activities are the main culprit behind the mass graves in the aftermath of Paeng. Can the Department of Environment and Natural Resources (DENR) identify and sanction the logging companies involved, and monitor their compliance with the law? Can the agency also pressure LGUs into dredging silted rivers and come up with innovative ways to discourage those living in coastal areas from throwing their trash into waterways and clogging them?

Instead of funneling limited resources to such useless beautification projects like the dolomite beach on Manila Bay, the DENR should start an intensive tree-planting project in denuded areas, and work with LGUs to ensure that reforested areas thrive and multiply.

Let’s not wait for another Paeng to set our priorities right. We’ve been on this road before, with too many lives lost and too few lessons learned.