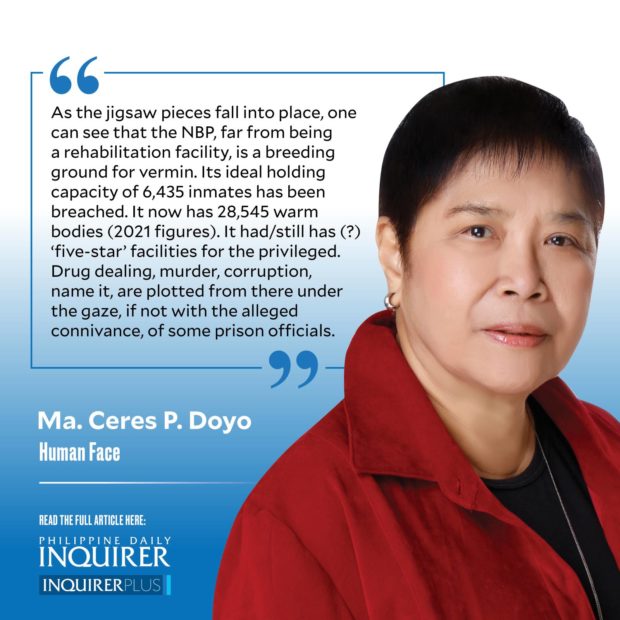 The unfolding of new information on the Oct. 3 murder of broadcaster and vlogger Percival “Percy Lapid” Mabasa of the “Lapid Fire” radio program reads like a classic whodunit. There was the surrender and confession on Oct. 17 of hired gunman Joel Escorial, that was promptly followed by the mysterious death on Oct. 18 of New Bilibid Prison (NBP) inmate Jun Villamor who, according to Escorial, acted as a “middleman” between him and the mastermind who paid him and his accomplices P550,000. Villamor knew the mastermind and made intimations about his own impending death to his next of kin. A second middleman is now in police custody.

Things are making sense to me now after noted forensic pathologist Dr. Raquel Fortun presented her report at an Oct. 29 press conference, where she said that Villamor died of asphyxia or suffocation with a plastic bag. Present at the presentation was Justice Secretary Jesus Crispin “Boying” Remulla, who had requested the pathologist’s services for a second autopsy.

The National Bureau of Investigation had earlier made its own autopsy and concluded that there were no signs of foul play.

There is not only one way of dying by asphyxiation, but being so specific about the use of a plastic bag when a plastic bag was not found in the vicinity of the murder scene suggests that someone knew about a plastic bag—and brought it up.

Most plastic bags that come with appliances have a warning printed on them, to keep them away from children. Prison officials should now consider plastic bags as life-threatening to others and to self. Remember the American actor whose cause of death was autoerotic asphyxia?

Fortun’s findings—evidence of pulmonary congestion, edema, and hemorrhages in the lungs—bolstered the plastic bag possibility or, shall we now say, that it is the other way around? That the plastic bag factor bolstered Fortun’s findings? I imagine the forensic pathologist getting a lead that makes her decide where to look. And so she looked. Eureka!

If I may digress, that was the title of the long-running TV whodunit series in the 1990s starring British-American Angela Lansbury as Jessica Fletcher, bestselling author of books on crime and solving them. The peripatetic Mrs. Fletcher was a modern-day Sherlock Holmes without the trench coat. Smartly dressed, hair coiffed in place, and pleasantly chatty, she always seemed to know where to look. The ageless Lansbury died on Oct. 11 at the age of 96. I say ageless because she played the mother of Elvis Presley in the 1961 movie “Blue Hawaii” long before she hit gold with “Murder, She Wrote.” People love murder mysteries.

But the case does not end with the silencing of Villamor. He had made known his fears to members of his family, who now fear for their lives. Well, as long as they keep the secret to themselves, they will always be in danger of being silenced. Better to make a counterthreat of revealing what they know in a sworn statement or video recording. The mastermind acting on his threat will only reinforce suspicions about his guilt.

Last Oct. 30, the Catholic faithful was reminded of the day being Prison Awareness Sunday. The Philippine bishops issued a statement saying that “what these PDLs (persons deprived of liberty) need are understanding and respect for them as human beings, a suitable place for correction and reformation, and a justice system that is centered on rehabilitation.”

In its totality, it was a bleeding-heart statement, indeed.

As the jigsaw pieces fall into place, one can see that the NBP, far from being a rehabilitation facility, is a breeding ground for vermin. Its ideal holding capacity of 6,435 inmates has been breached. It now has 28,545 warm bodies (2021 figures). It had/still has (?) “five-star” facilities for the privileged. Drug dealing, murder, corruption, name it, are plotted from there under the gaze, if not with the alleged connivance, of some prison officials.