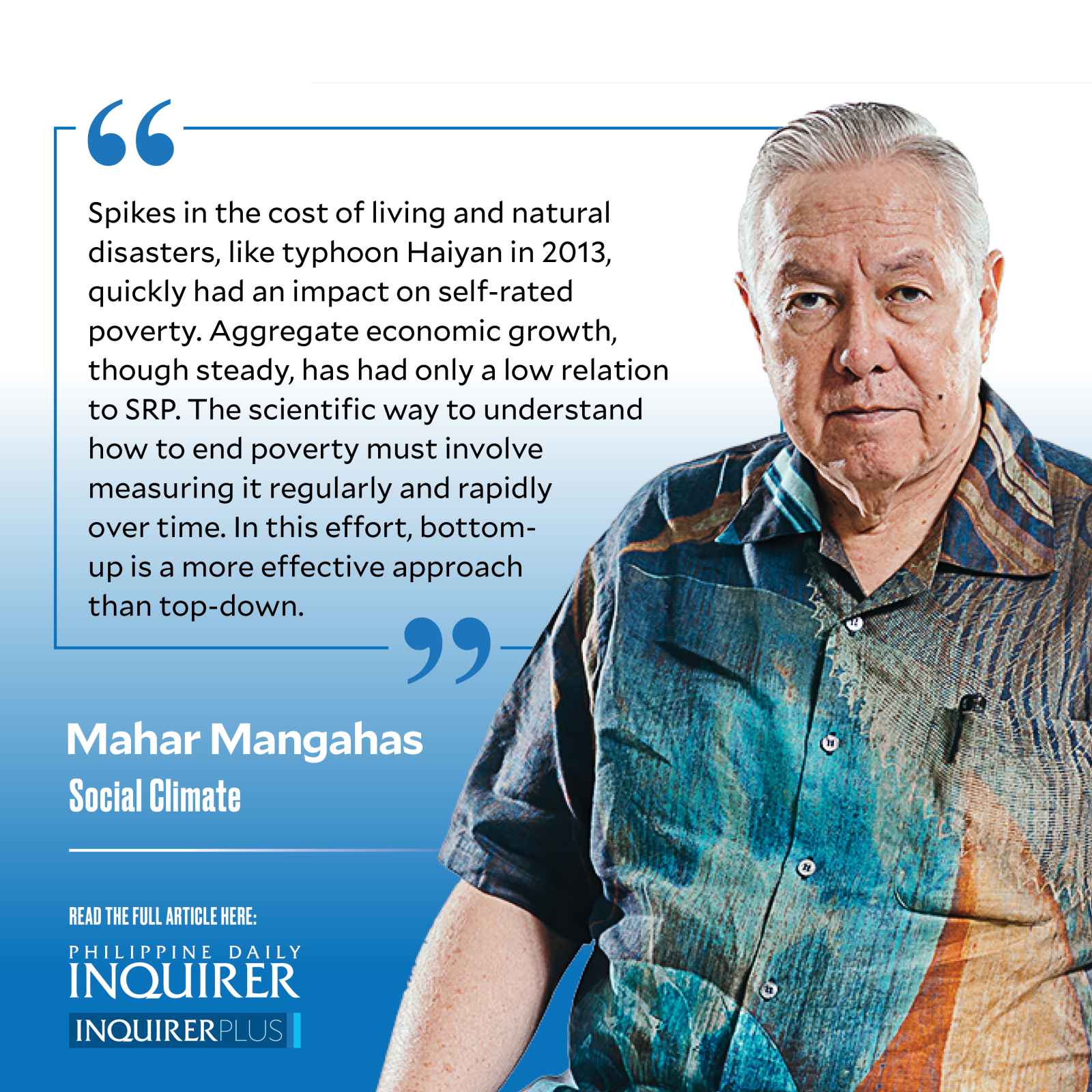 Yet the truly up-to-date poverty numbers are of self-rated poverty (SRP), done by Social Weather Stations, which are “poverty seen from below.” In the SWS surveys of 2022Q2 and 2022Q3, almost five of every 10 household heads considered their families mahirap, two called themselves hindi mahirap, and three self-identified with an unlabeled-line shown on a card, separating mahirap from hindi mahirap.

The last two SRP rates, of 48 percent in June and 49 percent in October, are definitely worse than the 43 percent in both April 2022 and December 2021, given the three-point error margin. The newest survey, done on 9/29/22-10/2/22, found poor families at two out of three in the Visayas (68 percent) and Mindanao (64 percent), about two out of five in the National Capital Region (44 percent), and one out of three in Balance Luzon (36 percent).

Given the area-level error margins, poverty is equally highest in Visayas and Mindanao; it is definitely less in NCR, and is least of all in Balance Luzon. NCR is no longer the least-poor area, as in the 1980s-1990s.

Families can transition both into and out of poverty. Since 2014, the SWS surveys have regularly followed up the SRP questions by asking whether the poor have ever been not-poor before, and, if so, for how long; as well as asking the not-poor whether they have ever been poor before, and, if so, for how long. We describe at least five years as “usually,” and one to four years as “newly.”

This shows that transitioning works both ways. There is no simple “graduation” out of poverty.

The national median SRP gap—what poor families in general say they lack in order to reach their thresholds—is P6,000 per month. It is what half of the nation’s poor say is the shortfall in their home spending budget. These show that poor people’s statements of their needs are not exorbitant.

Of course, the cost of living varies with the area. The new survey found the median monthly poverty threshold at P20,000 in NCR; it found a standard P15,000 median in the other areas. The median monthly poverty gap is P9,000 in NCR, or close to half of its threshold. The corresponding gaps are P5,000 in Balance Luzon, P6,000 in Visayas, and P7,000 in Mindanao, or at least one-third of the respective thresholds in those areas.

Asking what the people need is an old tradition in survey research—“making ends meet” is the common phrase in US and British questionnaires. The SWS surveys have always used mahirap, which is not as dire as dukha or maralita, with no embellishment. It means whatever the survey respondents understand by it; the interviewers are trained not to explain it.

The self-rated poor have familiar characteristics: they are more rural than urban, are relatively less schooled, tend to have more children, are more prone to sickness, and so forth.

The SRP concept is primarily intended for time-series, rather than cross-sectional, analysis. Its simplicity has allowed poverty to be measured as frequently as the gross domestic product for three decades now. This long-time series shows that changes in Philippine poverty have been ragged, rather than smooth. Spikes in the cost of living and natural disasters, like typhoon Haiyan in 2013, quickly had an impact on SRP. Aggregate economic growth, though steady, has had only a low relation to SRP.

The scientific way to understand how to end poverty must involve measuring it regularly and rapidly over time. In this effort, bottom-up is a more effective approach than top-down.