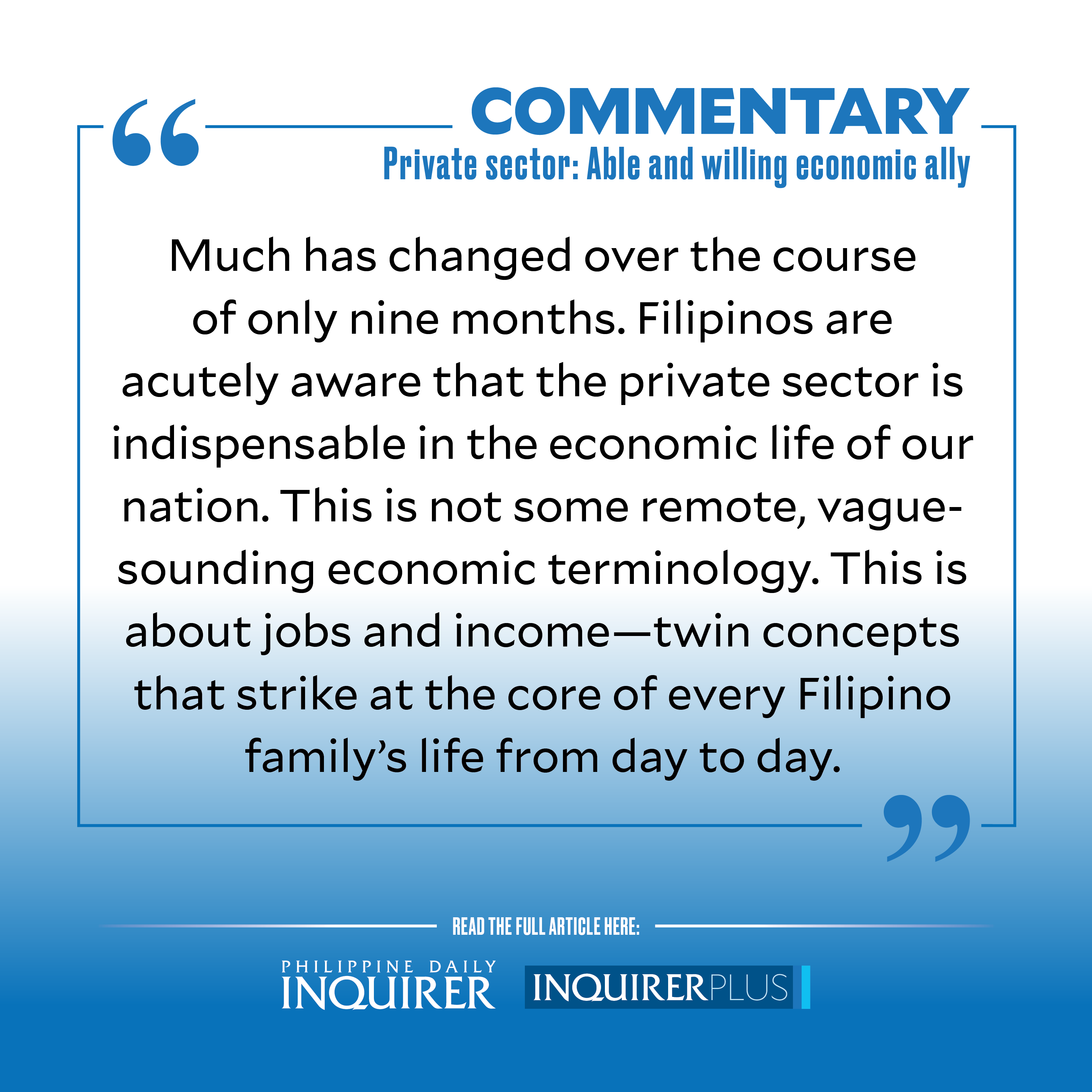 It follows that an even higher percentage—89 percent of respondents, with 62 percent strongly agreeing—are convinced that the government and the private sector should be partners in economic recovery.

We at Stratbase have always been pushing for a heightened, constructive, and sustained engagement between the government and the private sector. Their roles, strengths, resources and even perspectives complement each other. They will be able to do so much more together when vision, resources, and roadmaps are aligned. And if ordinary Filipinos are aware of this, it does makes sense for our government leaders to be more receptive to the innovations, solutions, and big financing that private enterprises can offer.

According to the Pulse Asia survey, respondents believe there are several ways in which the private sector can help boost the Philippine economy: creating jobs (69 percent), helping uplift the lives of Filipinos out of poverty (65 percent), expanding livelihood opportunities (49 percent), and improving health care systems (37 percent).

These numbers by themselves are already telling, but they become even more so when we take into consideration that respondents from Metro Manila have significantly changed their perception—based on a comparison of the December 2021 and September 2022 surveys—of how important it is to address unemployment and poverty in the country.

In the earlier survey, just 58 percent of respondents nationwide agreed that creating jobs was an area where the private sector can help. Nine months later, the number jumped to 69 percent. The jump was markedly higher in the National Capital Region, where an even greater percentage of respondents identified job creation—77 percent in September 2022, from 61 percent in December 2021, or an increase of 16 percentage points—as a top area where the private sector can help.

A similar change is apparent in the way people thought about the private sector’s role in uplifting Filipinos’ life out of poverty. In December, just 57 percent believed this was so, but the number increased to 65 percent in September, representing an 8 percentage point increase nationwide.

This is magnified in the NCR which saw a 31 percentage point jump. In December, just 39 percent of NCR respondents believed the private sector can help in alleviating poverty. By September 2022, the number had jumped to 70 percent.

Much has changed over the course of only nine months. Filipinos are acutely aware that the private sector is indispensable in the economic life of our nation. This is not some remote, vague-sounding economic terminology. This is about jobs and income—twin concepts that strike at the core of every Filipino family’s life from day to day.

The people know the government cannot do everything on its own, and that business has the expertise, experience, and vast resources to assist the government in most aspects of nation-building.

The private sector is not only able to do all this. As it has demonstrated so many times in the past, it recognizes its role in society and is very much willing to engage with the government.

It only needs to be given a chance and an enabling playing field. The government should show its openness and sincerity to work with the private sector by fostering an environment of transparency, efficiency, stability, and respect for the rule of law.

Dindo Manhit is the founder and CEO of the Stratbase Group.