Go beyond the nutribun | Inquirer Opinion 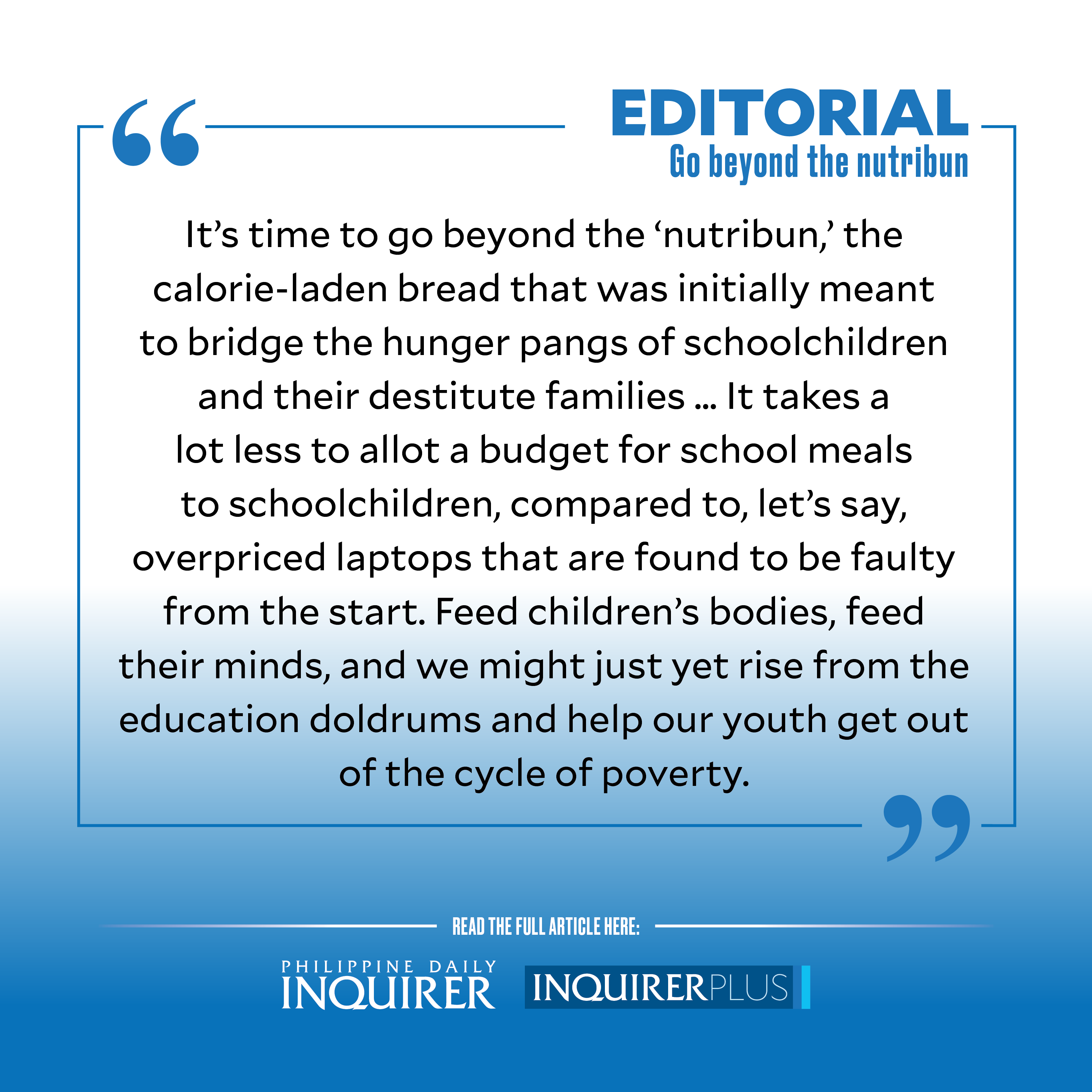 Filipinos who throw up their hands at the seeming hopelessness of the national educational system need only look at a tiny country where, some 40 years ago, recovering from the devastation of World War II, it embarked on a revamp of its educational system that is today counted among the best in the world.

An article in Smithsonian Magazine observes that the education system of Finland “began some 40 years ago as the key propellent of the country’s economic recovery plan.” For a government to count on education as the keystone in a country’s economic development is unusual enough. But that it has succeeded as well as it did in Finland is indeed remarkable.

Says the article: “Educators had little idea it was so successful until 2000, when the first results from the Programme for International Student Assessment (Pisa), a standardized test given to 15-year-olds in more than 40 global venues, revealed Finnish youth to be the best young readers in the world. Three years later, they led in math. By 2006, Finland was first out of 57 countries in science. In the 2009 Pisa scores, the nation came in second in science, third in reading and sixth in math among nearly half a million students worldwide.” The article went on to quote a school principal in Helsinki: “I’m still surprised. I didn’t realize we were that good.”

In contrast to the good feelings generated by Finnish students’ performance in Pisa, the dismal rankings achieved by Filipino students have led to much shock, grief, and denunciation. Legislators, local officials, and educators have been busy pointing fingers at who and what is to blame for this dismal situation.

But Finnish educational authorities offer one simple solution to encourage school children to troop to their classrooms, concentrate on their lessons, and perform better in class. And this is simply to feed the children, provide free meals, and even teach them to appreciate the value of nutritious food and the effort that goes into growing the stuff we eat.

This paper’s education reporter Jane Bautista was recently in Finland upon the invitation of the Finnish government to see what the Philippines can learn from the Finnish education model. Anita Lehikoinen, permanent secretary of the Ministry of Education and Culture, said their system is “focused on learning and not steering,” following a policy that “every school is the best possible school for all children in their community.”

Apart from upgrading the training of teachers and improving the physical infrastructure of schools, Finland is also notable for providing free school lunches. Authorities believe, wrote Bautista, that “a hungry child is less likely to concentrate and more likely to drop out of school.”

This is why Finland holds the record for the world’s longest-running free school feeding system, where all students attending preprimary, basic, and upper secondary education are provided a healthy and balanced meal in every school every day.

Finland is also seeking to expand the school feeding program in other parts of the world. “The goal is for every boy and girl in this world to get a school meal by 2030,” Finnish minister for development cooperation and foreign trade Ville Skinnari told the media.

Finland has co-chaired with France the establishment of the School Meals Coalition launched in September 2021 aimed at helping governments and other partners reestablish and improve food and education systems worldwide.

Another country that has a mandatory school lunch program for children is Japan, which provides free or subsidized nutritious food not only to ensure that children eat healthy meals but also as a subject to educate them about food and nutrition.

Indeed, it’s time to go beyond the “nutribun,” the calorie-laden bread that was initially meant to bridge the hunger pangs of schoolchildren and their destitute families. Adopting the Finland or Japan model of providing free and nutritious food for our schoolchildren will go a long way in encouraging them to attend school and finish their education, and later become employable and productive citizens. This is one endeavor that deserves the millions and billions that are being earmarked for intelligence funds, ROTC training, or lost to corruption. If the national government and the Department of Education (DepEd) embark on this project to feed the children in schools, there will certainly be public and private resources they can tap to finance a sustained program. There is no doubt that if a program is designed and implemented properly, drawing from the experiences of successful models like Finland, there won’t be a lack of private sector or organizational partners the DepEd can tap to undertake a nationwide school lunch program.

It takes a lot less to allot a budget for school meals to schoolchildren, compared to, let’s say, overpriced laptops that are found to be faulty from the start. Feed children’s bodies, feed their minds, and we might just yet rise from the education doldrums and help our youth get out of the cycle of poverty.