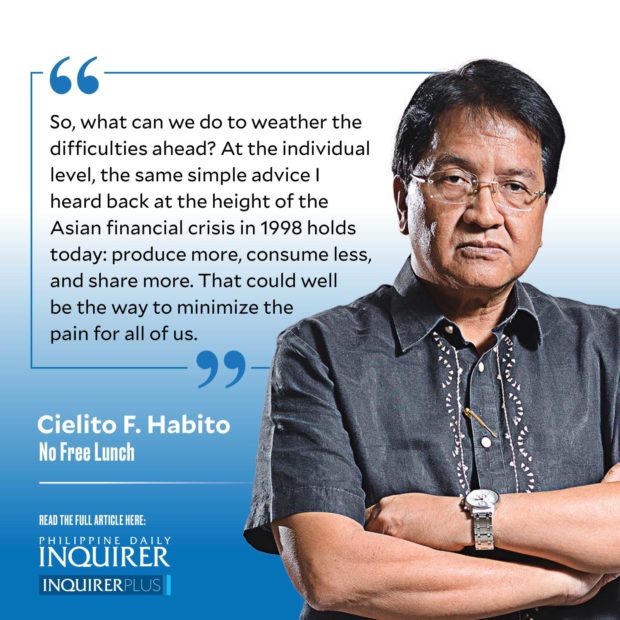 With the peso-dollar exchange rate now seemingly courting P60 to the dollar, our economy appears to be suffering from a case of LDM, or loose dollar movement. Dollars are indeed flowing out of the country for various reasons, foremost being how the US economy is sucking in its own currency with its rising interest rates.

The US Federal Reserve Bank has been deliberately raising its rates to mop up too many dollars in circulation, which has caused inflation rates Americans have not seen in decades. High-interest rates make US financial investments more attractive, unless other countries match the US interest rate hikes point by point. But central banks have various reasons not to match the US Fed’s moves, especially because higher interest rates also stifle investments, production, jobs, and incomes.

Such is the predicament our own Bangko Sentral ng Pilipinas (BSP) faces. It saw no need to match US interest rate hikes point by point earlier on, as our own inflation has not been as high and was more due to supply disruptions (especially in meat and fish), not too much money going around. But then Russia invaded Ukraine, which affected supplies and pushed up prices of our vital imports like fossil fuels, fertilizers, and wheat, fueling further domestic inflation. It also led to greater outflow of dollars to pay for the now more expensive imports, adding to the dollar diarrhea, further raising the exchange rate. But a rising exchange rate actually favors a lot of people: workers in export, tourism, and import-competing industries (whose competing imports get more expensive), families of overseas Filipino workers receiving remittances, and workers who get jobs in new or expanding foreign firms that now find investing in the country cheaper. A peso that has lost value is, after all, also a more competitive peso. Thus, the BSP does not fret over a depreciating peso as much as it does with rising inflation.

But things changed by the time the exchange rate had risen by more than the inflation rate because that now meant that the exchange rate rise would worsen inflation itself. And given that managing inflation is BSP’s primary mandate, it must now stem inflation—and depreciation—with tighter money supply, which means raising interest rates, even if it means further dampening the already dampened growth of the economy. That means stifling jobs, if not killing them outright. Many argue that growth is not everything, and that controlling inflation is more important, but it’s hard to tell that to those who are unable to find jobs or losing their jobs outright.

There are two important things to note about the current peso depreciation. One, it is almost entirely caused by the rising dollar, and completely external to us. It can be seen in how the peso’s movement has closely tracked that of the euro and Japanese yen, two of the most important reference currencies for the dollar. This means that all other currencies closely linked to it have also been drastically losing value, including the mighty British pound which is now almost at parity with the dollar, as Britain braces for great economic troubles ahead.

Two, while it is said that the peso has been the “worst performing” currency in Asean and possibly Asia since the start of the year, we could also describe it as having become the most competitive currency, for reasons already explained. In fact, while major economies are now bracing for recession through next year, the Philippine economy remains positioned for robust growth, albeit slower than earlier projected. And much of that growth will come from how the effect of remittances, which have traditionally driven our consumption growth, will be boosted by the peso depreciation—not to mention its push on tourism, exports, and foreign direct investments. Still, we must expect things to get worse before they get better.

So, what can we do to weather the difficulties ahead? At the individual level, the same simple advice I heard back at the height of the Asian financial crisis in 1998 holds today: produce more, consume less, and share more. That could well be the way to minimize the pain for all of us.

Read Next
Our standard of leadership
EDITORS' PICK
House energy committee chair Arroyo bats for cheap electricity
PH ramping up talks on nuclear power deals
18,529 out of 24,903 pass nursing board exam
The Best Tech Gifts For The 2022 Holidays
6 fallen activists to be honored at Bantayog
The vivo Y16 makes the season of giving more thoughtful for the whole family
MOST READ
LOOK: Vina Morales goes to Boracay with mystery man
Ref admits he cheated to help Manny Pacquiao win
Mel Tiangco on co-anchor Mike Enriquez’s condition, ‘rivalry’ with Korina Sanchez
Application of tiebreak takes loser in and leaves winner out of title series as Creamline makes heartbreaking exit
Don't miss out on the latest news and information.