Our standard of leadership | Inquirer Opinion

Our standard of leadership 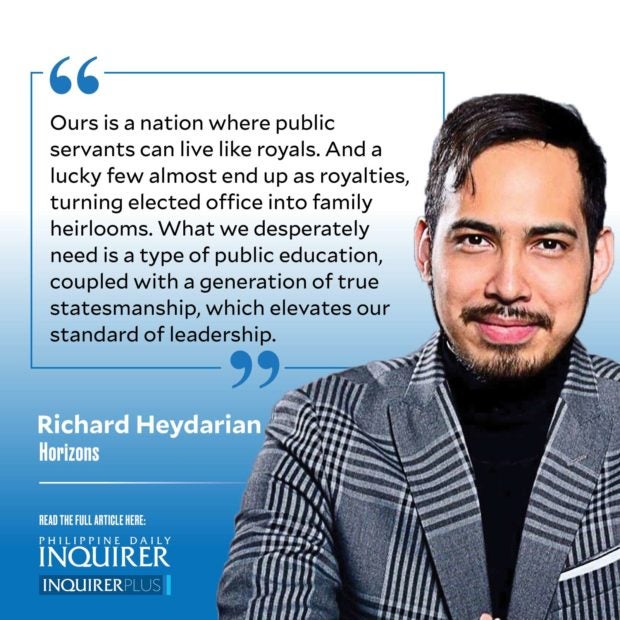 History was not made by those who did nothing,” says Queen Elizabeth II in the critically acclaimed drama-documentary series, “The Crown.” Here was a queen, who was thrust into power by and amid extraordinary circumstances and, thanks to her dedication and grit, ensured she would never end up “feel[ing] second best” before any other leader.

By standing her ground against the grain of misogyny, and berating the revolving door of male prime ministers as “a confederacy of elected quitters,” she managed to gain the respect of both her people and world leaders alike. As the Queen herself (not her Netflix series character) put it in a 1966 Christmas address, “it has been women who have breathed gentleness and care into the harsh progress of mankind.”

Throughout her long reign, she built an unparalleled legacy, which has won the affection of countless souls the world over. Her funeral, watched by 4.1 billion people, was the most watched event in history. Her iron determination, regal compassion, and lifelong dedication to statecraft largely explain why countless Britons and foreigners lined up to pay their final respects to the queen—even well after a new king was proclaimed.

In Queen Elizabeth II, common folks saw a bejeweled royal acting as a selfless public servant. And it was precisely this kind of leadership that saw once impoverished or villainous nations turned into breakout stars of our era.

Think of how former German chancellor Angela Merkel transformed into the de facto leader of the free world, almost singlehandedly transforming her once-feared nation into a haven of compassion at the height of the migrant crisis in Europe. Across Asia, a group of extraordinary leaders poured their souls into the vase of statecraft—conscientiously overseeing, year-by-year, the steady and gradual creation of world-class industries and a new vibrant middle class.

Notwithstanding his human frailties and authoritarian predilections, the longtime Singaporean Prime Minister Lee Kuan Yew managed to also win praise all around the world for his singular commitment to statesmanship. Under his watch, Singapore reclaimed its place of pride in the world, rapidly becoming a global entrepôt, as well as a diplomatic intermediary between China and the West.

As the feisty, no-nonsense Singaporean leader once said, “[a] nation is great not by its size alone. It is the will, the cohesion, the stamina, the discipline of its people, and the quality of their leaders which ensure it an honorable place in history.” Similar to Queen Elizabeth II, his funeral also witnessed an outpouring of public affection and sincere gratitude by millions of citizens from all walks of life.

Luckily in the case of Singapore, Lee Kuan Yew’s children, including outgoing Prime Minister Lee Hsien Loong, have inherited his work ethic and all-consuming commitment to public service. And that, dear reader, brings us to our beloved Philippines, where our seemingly overworked leaders apparently needed refreshment via VIP tickets to Singapore’s Formula 1 Grand Prix over the weekend.

But before berating the latest occupant of Malacañang for taking such an existential break just short of his first 100 days in office, let’s not forget about a former president, whose whereabouts were constantly under question. Instead of getting a fully committed statesman, what the nation ended up getting was an absentee landlord, who couldn’t help flying back to his home province almost 1,500 kilometers from the seat of power every time he felt the itch. And yet, his legion of supporters chose partisan empathy for the aging former mayor rather than demand full commitment to the highest office of the land. The list is long.

What we desperately need is a type of public education, coupled with a generation of true statesmanship, which elevates our standard of leadership. More than two centuries ago, the consummate statesman James Madison warned: “[a] popular Government, without popular information, or the means of acquiring it, is but a Prologue to a Farce or a Tragedy.”