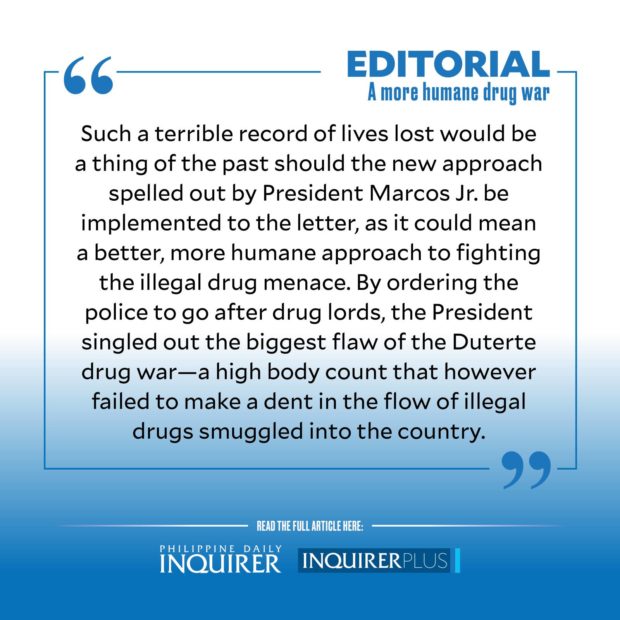 During his visit to New York late last month, President Marcos Jr. announced that his administration would pursue a “slightly different” approach to the controversial and bloody drug war of his predecessor, Rodrigo Duterte.

“It is certainly my view that enforcement, which has been the part of the drug war that has been most vigorously pursued by President Duterte, only gets you so far. And my approach is slightly different,” Mr. Marcos said at a forum of Asia Society at the end of his six-day visit to the United States.

He told his audience that during his first command conference with the Philippine National Police, he asked them to “adjust (their) focus.”

“I simply told them, ‘Look I’m not interested in the kid who makes P100 a week selling weed.’ That’s not the person that I want you to go after … I want you to go after people who, if we get them, if we neutralize them, or put them in jail, put them away, we will make an actual difference so that the supply of drugs, the system of distribution … it will put a stop to it,” Mr. Marcos said.

While the policy was made public in the US thousands of miles away, Mr. Marcos’ marching orders should ring loud and clear to the police and should have taken effect by now.

The President’s statement is a pivotal shift from the murderous “kill, kill, kill!” mantra of the Duterte administration, whose brutal approach to the drug war led to thousands of mostly poor victims getting killed by police in bloody operations that flouted due process.

By the conservative estimate of the Philippine Drug Enforcement Agency (PDEA) alone, at least 6,248 drug suspects were killed from 2016 up to end of April this year, a death toll so appalling that it prompted the International Criminal Court in The Hague to launch an investigation against Duterte and his aides for crimes against humanity.

The United Nations Office of the High Commissioner for Human Rights placed the number of deaths at 8,600 as of March 2020, but human rights groups believe the more accurate count could be at least 20,000.

Such a terrible record of lives lost would be a thing of the past should the new approach spelled out by Mr. Marcos be implemented to the letter, as it could mean a better, more humane approach to fighting the illegal drug menace. By ordering the police to go after drug lords, the President singled out the biggest flaw of the Duterte drug war—a high body count that however failed to make a dent in the flow of illegal drugs smuggled into the country.

While it cannot be ascertained at this point if Mr. Marcos’ version of the drug war would be bloodless, the shift in focus to the actual source of illegal drugs would put law enforcement agencies on the right track. Instead of rounding up small neighborhood users, they can spend their time and resources sniffing out the big drug syndicates and stop the drug menace at its source.

Another stark difference from his predecessor’s approach is the stress this time on preventive programs and the rehabilitation of drug users. In a separate interview last month, Mr. Marcos said he wanted the drug rehabilitation program to be “more sensitive and more sympathetic to those who actually have gotten caught up in this lifestyle … pull them out of that culture and help them start again and live a good life as good and contributing members of society.’’

This is worlds apart from Duterte’s damning pronouncement about drug users in 2017: “(R)ehabilitation is useless. When the brain has shrunk, it stays shrunk,” he said.

Hopefully, the new President’s statement would be translated into action by the country’s law enforcement agencies that will now have to shed the culture of impunity imposed and sanctioned by their former commander in chief. A course correction should not be difficult if the police, the PDEA, and similar agencies were to abide by their sworn duty to protect the public, safeguard the peace, and uphold the law.

The new PNP chief, Gen. Rodolfo Azurin Jr., has similarly vowed to institute reforms, including a stop to the involvement of police in investigating drug war killings by their own kind. “What is needed is that while we do our job, we also try to preserve human life because killing is not the solution,’’ Azurin said after his assumption of the PNP post, and rightly so.

With the imprimatur from the President and the PNP chief, the campaign against illegal drugs should now be conducted the way it should be—in accordance with the law. While there is no disagreement that illegal drugs are a social problem that must be addressed, there is no reason for any administration to equate safety in the streets with relentless bloodshed.