Who cares about GNP or GDP? | Inquirer Opinion

Who cares about GNP or GDP? 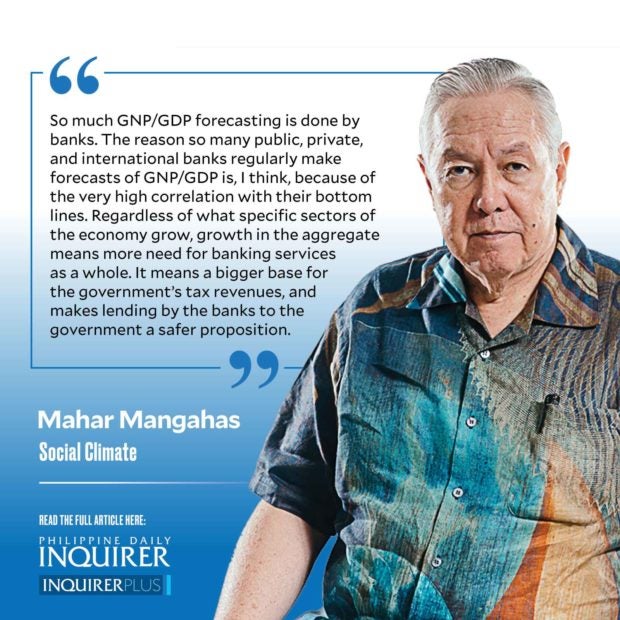 The GNP is typically larger than GDP because it includes the value produced by the very large number of overseas Filipino workers (OFWs). It counts, at the very least, the remittances of OFWs to their families at home as monitored by banking channels. Such remittances matter very much: the SWS surveys show that respondent-families receiving overseas remittances are always better off in terms of economic indicators.

On the other hand, the GNP should not count the remittances of foreign companies doing legitimate business in the Philippines of profits to their home offices, or of foreign expatriates to their relatives at home. I wonder how much this is; I doubt it’s insignificant.

The West Philippine Sea. The Philippine territorial waters produce value that should be counted in both GDP and GNP. The value of the fish and other marine catch should be included, regardless of whether caught by Filipino fishermen or by foreign poachers.

The monetary value of the services rendered by the artificial islands created by China in the Philippine exclusive economic zone should be counted in both GDP and GNP. It doesn’t matter whether the value gained by trespassing is sold; what matters is that it can be monetized.

Philippine offshore gaming operators (Pogos). The value created by the Pogos should be included in our GDP. What the operators and their employees remit back to China is not within the Philippine GNP, but within the GNP of China. I wonder if China cares to count the value of a service (gambling entertainment) that is legal to produce in the Philippines but illegal to produce in China, and yet is transferred via internet for consumption in China.

Value added in production is income at the same time. A production unit, such as a business company or a family farm, engages in production by taking things external to it (such as raw materials purchased from outside the unit), and applying its internal resources (such as its workers and nonhuman assets) to them, thereby adding value to the external inputs.

Dividing it by the population gives per capita GDP, loosely called “per capita income.” This does not mean that everyone earns the same amount; it is only what everyone could receive if the total earnings were shared equally.

Instrumental versus beneficial products. Whereas some products—like food, liquor, and entertainment—are personally consumed and valued for their own sake, other products—like police services, vaccinations, naval patrols, weather forecasts, and the justice system—have value because they enable production units (as well as consumption units such as households and individuals) to function more efficiently than if they were absent.

These enablers are instrumental, rather than finally-beneficial, products; they are part of the social capital of the community. In an exercise counting within GNP only the costs of public education, health, labor, and social welfare, then the balance—termed net beneficial product—was only three-fourths of GNP, and its annual growth rate was a full percentage point less than that of GNP (see Leonardo Sta. Romana III, “Indicators of economic well-being,” in my book, “Measuring Philippine Development,” Development Academy of the Philippines, 1976).

So much GNP/GDP forecasting is done by banks. The reason so many public, private, and international banks regularly make forecasts of GNP/GDP is, I think, because of the very high correlation with their bottom lines. Regardless of what specific sectors of the economy grow, growth in the aggregate means more need for banking services as a whole. It means a bigger base for the government’s tax revenues, and makes lending by the banks to the government a safer proposition.