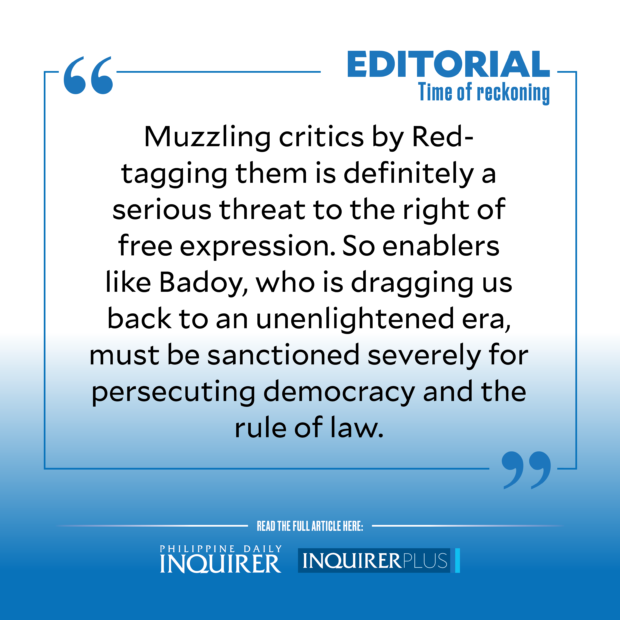 Will the irresponsible former spokesperson of the National Task Force to End Local Communist Armed Conflict (NTF-Elcac) finally get what she deserves?

In a press briefer on Tuesday, the Supreme Court said it had tackled en banc the possible actions it could take on the case of Manila Regional Trial Court (RTC) Judge Marlo Malagar, who had received threats from “a certain Lorraine Badoy.” The court also “sternly warn(ed) those who continue to incite violence through social media and other means which endanger the lives of judges and their families,” and said that “this shall likewise be considered a contempt of this court and will be dealt with accordingly.”

Also on Tuesday, a lawmaker said the Philippine National Police “will investigate” Badoy for her online attack on the judge, and her remarks that she wants to build an organization that will “start bombing the offices of these corrupt judges who are friends of terrorists even if they kneel before us and beg for their lives.”

Nueva Vizcaya Rep. Luisa Cuaresma made the assurance in response to a question raised by Kabataan party list Rep. Raoul Manuel, who had pointed out the disparity in the action of authorities regarding Badoy’s online threats, and that of a teacher arrested immediately after posting that he was putting a P50-million bounty on former president Duterte’s head.

Badoy last week Red-tagged Malagar after the judge dismissed the government’s 2018 petition to declare as terrorists the Communist Party of the Philippines (CPP) and its armed wing, the New People’s Army (NPA).

In her now-deleted and disavowed Facebook post, Badoy said: “So if I kill this judge and I do so out of my political belief that all allies of the CPP NPA NDF must be killed because there is no difference in my mind between a member of the CPP NPA NDF and their friends, then please be lenient with me.”

Under the previous administration, Badoy and the NTF-Elcac relentlessly Red-tagged government critics, including lawyers, activists, sitting lawmakers, and even organizers of community pantries, identifying them as being communist fronts or sympathizers. The practice, according to the Commission on Human Rights, “violates the Constitutional guarantee of presumption of innocence, and may have serious implications on the security and movement of individuals and groups involved.”

In fact, some Red-tagged personalities have since been arrested and detained, with several of them shot dead by unknown assailants or by police who said they had “fought back” during the raid.

This is not the first time that the task force had targeted judges. In March last year, a poster on an Edsa pedestrian overpass described Mandaluyong RTC Judge Monique Quisumbing-Ignacio as a member of the communist movement after she ordered the release of two activists over irregularities in their arrest and the search warrant used by the police.

Badoy’s latest caper prompted Hukom, an organization of trial court judges, to issue a statement saying that her online threats should be called out because of their “chilling effect on the exercise of our judicial functions and the lasting damage they cause to our institution.” Hukom added: “As members of the Bench, we call on our fellow judges: let us refuse to be victims … Let us not normalize the use of violence against persons as a form of redress by being silent.”

The Integrated Bar of the Philippines (IBP) also condemned the online abuse and harassment of Malgar. “The judiciary’s job is to decide disputes. And no judge should ever feel threatened just by performing that duty,” it said, warning that it would take action.

Former IBP president Domingo Cayosa called on the Supreme Court to provide “clear and concrete” assistance to ensure protection for lawyers and judges who have been Red-tagged, and “to do more” to educate the public on judicial roles and processes. Laws should be passed to prosecute and penalize Red-taggers, he added

Badoy likewise Red-tagged the judge’s husband, University of the Philippines (UP) Cebu Chancellor Leo Malagar, prompting a strong rebuke from UP Diliman Chancellor Fidel Nemenzo who slammed it as an “open threat” against the Malagars. “Her outright Red-tagging is not only patently ridiculous; it is also dangerous because it has made them targets of hate and violence,” Nemenzo said.

Could it be that Badoy is foaming at the mouth because she’s angling for a reappointment to what could easily be a lucrative post, given that the task force has a current allocation of P17.1 billion? Or, as one lawyer cites, is the Red-tagging meant to intimidate judges amid the increasing number of cases against government critics that have been dismissed because of lack of merit?

Muzzling critics by Red-tagging them is definitely a serious threat to the right of free expression. So enablers like Badoy, who is dragging us back to an unenlightened era, must be sanctioned severely for trampling on democracy and the rule of law. Bring it on.