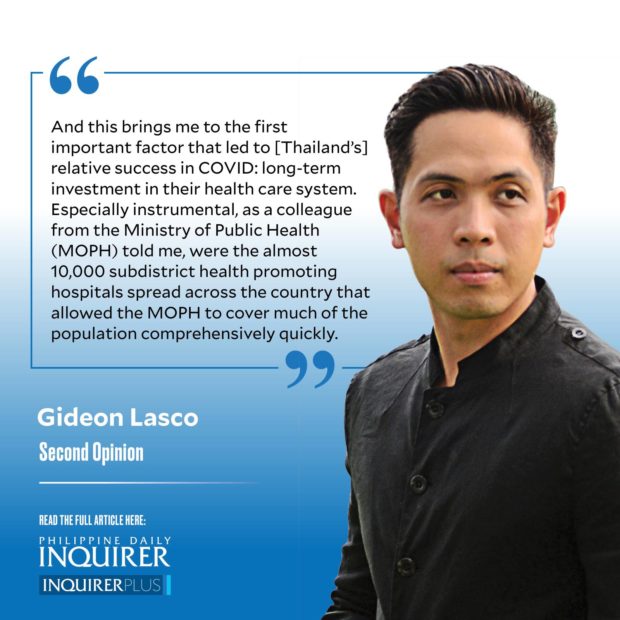 Bangkok—I was in the Thai capital in early 2020, just as people were beginning to wear masks, and now, I am back just as people are beginning to take them off. From tomorrow onwards, COVID-19 will be reclassified from a “dangerous communicable disease” to a “communicable disease under surveillance,” signaling a shift to the virus being officially seen as endemic, even as the government is still encouraging measures like getting vaccinated and wearing face masks.

Indeed, an entire pandemic has transpired since the last time I was here, and as a public health researcher, I am keenly interested in how the country has managed to cope with COVID-19.

This is especially germane for us, given that Thailand was one of the pandemic’s early success stories, managing to keep the virus at bay for much of 2020, only having its first significant outbreak in December that year, followed by a major surge in 2021, as well as the less severe Omicron-fueled surge earlier this year. Though having more reported cases than the Philippines (4.6 million vs. 3.9 million), Thailand registered just about half the number of deaths (>32,000 vs. >62,000).

What can explain Thailand’s relative success, and what can we learn from it?

Actually, even before COVID-19, health systems researchers have been looking to this country for inspiration, given its experience with health reforms since it ambitiously introduced universal health care in the early 2000s as a then-lower-middle income country. By 2012, 99.5 percent of the population were reported to have health protection coverage, at a time when our own coverage was below 60 percent.

And this brings me to the first important factor that led to their relative success in COVID: long-term investment in their health care system. Especially instrumental, as a colleague from the Ministry of Public Health (MOPH) told me, were the almost 10,000 subdistrict health promoting hospitals spread across the country that allowed the MOPH to cover much of the population comprehensively quickly.

Another major contribution was the presence of the village health volunteers—numbering over a million—that reached an astounding 14 million households in the first two months of the pandemic alone, offering timely information to everyone, identifying who needed to be quarantined, and providing a cost-effective surveillance mechanism. As Kaweenuttayanon, et al. (2021) concluded, “The timely mobilization of Thailand’s trusted village health volunteers, educated and experienced in infectious disease surveillance, enabled the robust response of the country to the COVID-19 pandemic.” Eventually, the volunteers were also crucial in encouraging people to get vaccinated, and its coverage of over 76 percent is better than our 65 percent.

As with other aspects of the health care system, there had been a long-term investment in these volunteers, who receive 1,000 baht (around P1,500) a month; they were also key in addressing previous outbreaks and had forged relationships with their communities, which contributed to the all-important element of trust toward the MOPH.

Beyond the public health system, the country also benefited from a “whole of society approach,” with civil society organizations and private companies pitching in various aspects of the pandemic response, from facilitating access to digital services and hotlines—and providing material needs like face masks and food supplies. In an Asian Development Bank webinar back in March as part of the SECURE Webinar Series, Kanchit Limpakarnjanarat, a national health security expert, likewise credited a “well-supported research and development sector” as pivotal in the country’s vaccine development.

I think another factor is the flexibility of Thailand’s COVID-19 response, given the ever-evolving virus and ever-changing circumstances of the pandemic. Doubtless, this adaptability has been made possible by the relative insulation of the decision-making process from politics and medical populism, allowing measures like the “Phuket sandbox” to be piloted then scaled up.

Of course, as my friends here attest, they, too, faced numerous challenges and some draconian measures during the first few months of the pandemic, as well as during the surges. And the government’s response has not been without its share of controversies and setbacks, such as delays in manufacturing and rolling out vaccines last year.

Perhaps more significantly, although the pandemic is officially over, the inequity it exacerbated will endure as a slow-brewing crisis.

“Despite looking like the economy is doing well, many, especially the poor and lower-middle income people, are struggling even more with rising living costs,” as Kritaya Sreesunpangit, a social entrepreneur, told me. “But for most people, overall, they aren’t suffering enough to want to risk the status quo.”