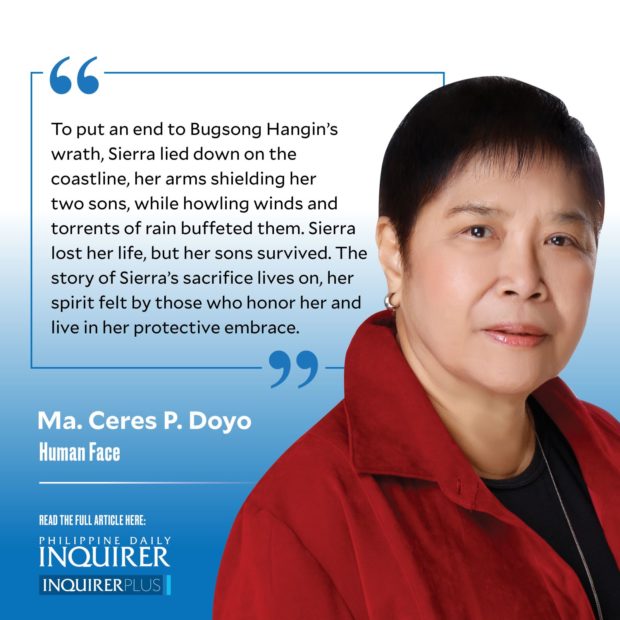 The Spaniards called her Mother mountain, this vast range stretching down the northeastern flank of the island of Luzon like the heaving backs of massive whales. Through the years, the trees and slopes of the Sierra Madre, acting like giant windbreaks, broke the backs of tropical cyclones swirling in from the West Pacific. She was also a weather maker. Her peaks and lonely upland valleys, blanketed with great sweeps of rainforest, were magnets for moisture, constantly building towering stacks of cumulus clouds, and rain. Bringing precious water to the rivers and rice fields of the thirsty lowlands…”

That is from the ode-like introduction of the book “The Last Great Forest: Luzon’s Northern Sierra Madre Natural Park” (Bookmark, 2000) by Jose Ma. Lorenzo Tan. (The author headed World Wildlife Fund-Philippines for many years.) It is a book like no other because of the way the author presented it—with illustrations, photos, and highlighted texts that make the book look like a field guide that makes readers want to head for that “last great forest” and experience for themselves what a living mother it is. My signed copy has Lory’s handwritten words: “Forests=Water=Rice=Development. The Formula!”

Why the Sierra Madre? Because after Supertyphoon “Karding” hit Luzon last Sunday, the Inquirer had a page one story with the headline “Netizens hail Sierra Madre for ‘taming’ typhoon” (9/27/2022) by Frances Mangosing and Jeannette I. Andrade. A mountain as story maker, not just a where in the what-where-when-why-how-how much, but a how. How did she do it? Also a what. What did many people think she did?

The lead paragraph: “Sierra Madre … became a trending topic on Twitter during the onslaught of Supertyphoon ‘Karding’ (international name: Noru) as netizens called attention to how it protected Metro Manila and several provinces from calamities.”

Netizens, the story said, reminded their followers of its important role as an effective barrier against storms coming from the Pacific Ocean. As of Monday morning, the topic had 78,000 tweets. What a welcome change from all the toxic, hateful posts on social media directed at persons who do good, while those who promote and defend evil are extolled.

An online petition, “Save Sierra Madre,” emphasizes that the mountain range is truly the longest mountain range in the Philippines. “It covers 10 provinces and stands proudly at 6,069 feet. It contains the largest remaining tract of old-growth tropical rainforest … which is about 1.4 million hectares of forest, representing 40 percent of the country’s forest cover…

“(It is) home to hundreds of wildlife species, many of which are unique to the Philippines, including the Philippine eagle and the golden crowned flying fox.”

Facebook friends Monette and Darwin Flores posted that they have checked with their Dumagat friends, who live in the higher areas of the Sierra Madre, and learned that the indigenous community there has lost all their rice that was supposed to be harvested in two weeks. “Each family consumes 15 to 18 sacks per year for their high-energy requirement. They walk up and down high mountains and work fields in steep inclines. We will have conversations with the Dumagats on how they wish to be assisted and what they, too, wish to share…” You may contact Monette or Darwin at 0920-923-2327.

Typhoon Karding versus the Sierra Madre became like an allegorical tale about might versus might. I found a folktale about the Sierra Madre in Tatler magazine (“Magical Paradise,” March 14, 2016) where other tales about Philippine must-visit places were featured. Let me tell it briefly in my own words.

Long ago, in the coastline of what is now Luzon, there lived a dedicated mother named Sierra and her two sons, Iloco and Tagalo. Bugsong Hangin, the king of the mighty easterly winds, often visited and brought destruction to the place. The king had always been jealous of Sierra’s husband, Lusong, a warrior who lost his life during one of the king’s destructive visits.

To put an end to Bugsong Hangin’s wrath, Sierra lied down on the coastline, her arms shielding her two sons, while howling winds and torrents of rain buffeted them. Sierra lost her life, but her sons survived. The story of Sierra’s sacrifice lives on, her spirit felt by those who honor her and live in her protective embrace.

Prayers and praise for the five Bulacan rescuers who lost their lives during the typhoon. May your families draw strength from your courage.

Read Next
Marcos: ‘History is not through with me yet!’
EDITORS' PICK
Noche Buena items price hikes are justified and can’t be controlled – DTI official
The Best Tech Gifts For The 2022 Holidays
The vivo Y16 makes the season of giving more thoughtful for the whole family
House energy committee chair Arroyo bats for cheap electricity
COA says over 4,000 pending audit backlogs will be resolved in 2 years
DBM releases P5.2 billion for 9.8 million beneficiaries of targeted cash transfer
MOST READ
Claudine Barretto asks for prayers as she undergoes thigh surgery
Trader duped by seniors in ‘Marcos gold’ investment
LOOK: Alyssa Gibbs finally marries fiancé five years after engagement
Rayver Cruz and Julie Ann San Jose just made their relationship official
Don't miss out on the latest news and information.