Marcos: ‘History is not through with me yet!’ | Inquirer Opinion

Marcos: ‘History is not through with me yet!’ 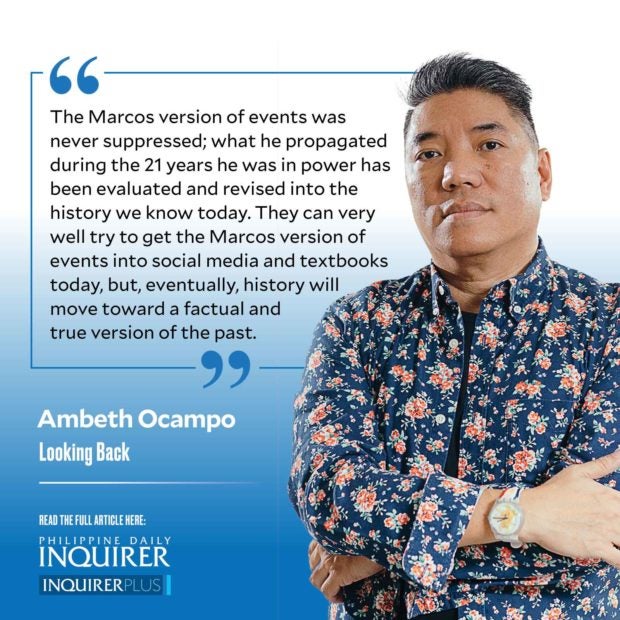 There are two tired phrases making the rounds these days, both of them utterly stupid. When asked to comment on these phrases at forums, I restrain myself from blaming the inquisitor’s Araling Panlipunan and History teachers, who failed to explain that “history repeats itself” and “history is written by the victors” are false.

History cannot repeat itself because it has no agency, no mind, no power to make events move the way it wants it to move. History does not repeat itself; it is people who do, often at their peril. If you accidentally trip on a banana peel once, that’s alright. If you knowingly trip on a banana peel a second time, that’s ridiculous. However, stepping on a banana peel is a choice that complicates things. Many historians have pointed out, most persuasively in Barbara Tuchman’s “The March of Folly” (1984), that when you look back into the past, you will see a chronicle of leaders who pursued policies contrary to their self-interest and dragged everyone down into the pit with them.

Those who ignore the lessons of history know that it is not a crystal ball that predicts the future. At best, history is a guide. It works by discerning patterns from the past, relevant to conditions in the present, that come into play in decisions that consequently chart the future. I imagine many Filipinos treat history like they would traffic signs, as mere suggestions. It is worse when someone asserts that we respect his opinion, arguing that traffic signs are open to discussion because of differing points of view. While most people understand a red light to mean stop, a green one to mean go, and a yellow one to mean caution, the person who causes an accident pleads for our understanding, “nagmamadali lang ako,” meaning: green is go; yellow, go faster; and red, go fastest.

Whenever there is talk of historical distortion, like the idea the first Marcos presidency was a “golden age” in the Philippines, the justification is that “history is written by the victors.” Remember that this is not historical revision that, literally, seeks to review and correct what is wrong; it goes the other way around by insisting the false to be true. History is not set in stone, it can be changed, or revised, when new facts or new perspectives come along. The counterfactual narrative being foisted on us, starting with that now forgotten comedy film “Maid in Malacañang,” is that Marcos Sr. has been portrayed badly in all histories written after the 1986 Edsa people power revolt. By bringing out “the other side” or Marcos Sr.’s long repressed version of events, Philippine history will be rewritten to their liking. After all, there are 31 million people who voted for Marcos Jr., or the “winning” side, that believe their propaganda can replace what has already been accepted as fact and validated by historical scholarship.

History is not just written by the “victors.” It is written by everyone, that’s why historians have to deal with conflicting accounts of the same event from different sources. The Marcos version of events was never suppressed; what he propagated during the 21 years he was in power has been evaluated and revised into the history we know today. They can very well try to get the Marcos version of events into social media and textbooks today, but, eventually, history will move toward a factual and true version of the past.

As I write this, there are a number of memoirs on my table: Emilio Aguinaldo’s “Mga Gunita ng Himagsikan” (1964), Apolinario Mabini’s “La Revolucion Filipina” (first published posthumously in 1931 but written during his exile in Guam, 1901-1903), Artemio Ricarte’s “Himagsikan nang manga Pilipino laban sa Kastila” (1927), Jose Alejandrino’s “La Senda del Sacrificio” (1933), and much more. I brought these out to momentarily escape Marcos’ long, dark shadow, but browsing through them led me to reflect on extracting truth from these biased, self-referential primary sources. Didn’t Winston Churchill quip that “history will be kind to me for I intend to write it myself”? Some men don’t just write history; they make history. The 50th anniversary of the declaration of martial law last week reminded me of the 1987 Playboy interview where Marcos declared, “History is not through with me yet!”