‘Wait for us; we will be there’ | Inquirer Opinion

‘Wait for us; we will be there’ 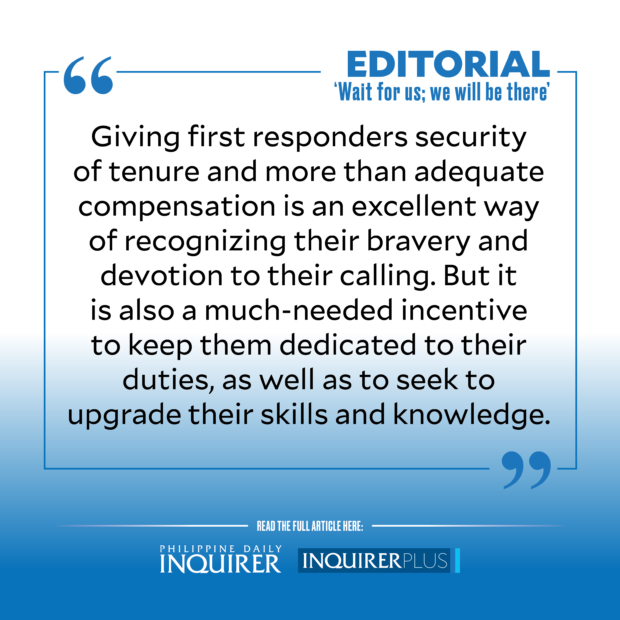 As his rescue team was rushing last Sunday to San Miguel town in Bulacan to save residents trapped by rising waters due to Supertyphoon Karding (international name: Noru), George Agustin found time to post a Facebook Live video of him and his four companions.

“Wait for us; we will be there,” Agustin assured his viewers, smiling with supreme confidence. These would be among his final words.

Hours later, the bodies of the five veteran rescuers—Agustin, 45; Troy Justin Agustin, 30; Marby Bartolome, 37; Narciso Calayag Jr., 33, and Jerson Resurreccion, 33—were found lifeless and scattered around Sitio Banga-Banga in Barangay Camias, one of the villages battered by Karding.

Eyewitnesses said a concrete wall at a gasoline station had collapsed on the group as they were organizing themselves into lifeboats deployed after their truck could no longer maneuver through the flood waters. The five were then swept away by the rapidly moving current.

As soon as news of the five rescuers’ deaths was released, accolades for their bravery and dedication poured in.

“They embody the best qualities of true Bulacan natives. Public safety is more than just a job; it’s a call to serve,” Bulacan Gov. Daniel Fernando declared. Interior Secretary Benhur Abalos praised the five men “for responding to the call of duty and rendering an unequivocal testament of genuine public service even at the expense of their own lives.”

Praise and sympathy emanated even from as far away as Cebu, where local officials and first responders mourned the passing of their fellow rescuers, especially Agustin and Resurreccion. The two were among those sent by Bulacan to Cebu in 2018 to help in search and retrieval operations after a deadly landslide in Barangay Tinaan, City of Naga.

And yet, even as fellow senators heaped praises on the five fallen responders, Sen. Joel Villanueva, who hails from Bulacan, took time to point out a glaring anomaly in the circumstances surrounding their deaths. All five, he said, were “casual” workers of the provincial government despite years of service amid the most challenging conditions.

Citing figures from the Civil Service Commission, Villanueva said that as of June 30 this year, the government employs a total of 642,077 workers as “job-order and contract-of-service employees.” This, despite long years of service, some for as long as 10, 15, and 20 years, without employment benefits or job security. Calling the situation “unfortunate,” Villanueva brought up the fact that while he has been “raising this particular issue almost every year, especially during budget season,” it has so far received little by way of support.

The closest his efforts have come to fruition, Villanueva recalled, was the passage of the security of tenure (SOT) bill which, however, was vetoed by then President Duterte in 2019. The President had argued that the SOT bill “unduly broadens the scope and definition of prohibited labor-only contracting, effectively proscribing forms of contractualization that are not particularly unfavorable to employees involved.”

Giving first responders security of tenure and more than adequate compensation is an excellent way of recognizing their bravery and devotion to their calling. But it is also a much-needed incentive to keep them dedicated to their duties, as well as to seek to upgrade their skills and knowledge.

Despite the country being among the world’s most vulnerable nations affected by climate change, including chaotic weather conditions of unpredictable power and duration, the Philippines seems perennially ill-prepared to deal with disasters. One recalls a declaration made by a local official some years back that rescue teams would no longer be fielded to help residents trapped in their homes after they refused to heed warnings and rebuffed initial efforts to evacuate them to safer grounds.

As the deaths of the five latter-day heroes prove, this is all so true. Tears may be shed for the men who sacrificed their lives for the welfare of others. But those tears need not have been wasted if we, as a society, had simply recognized the heroic efforts and dedication of humble rescuers and the culpability of the powerful, who choose to turn a blind eye to our collective plight.