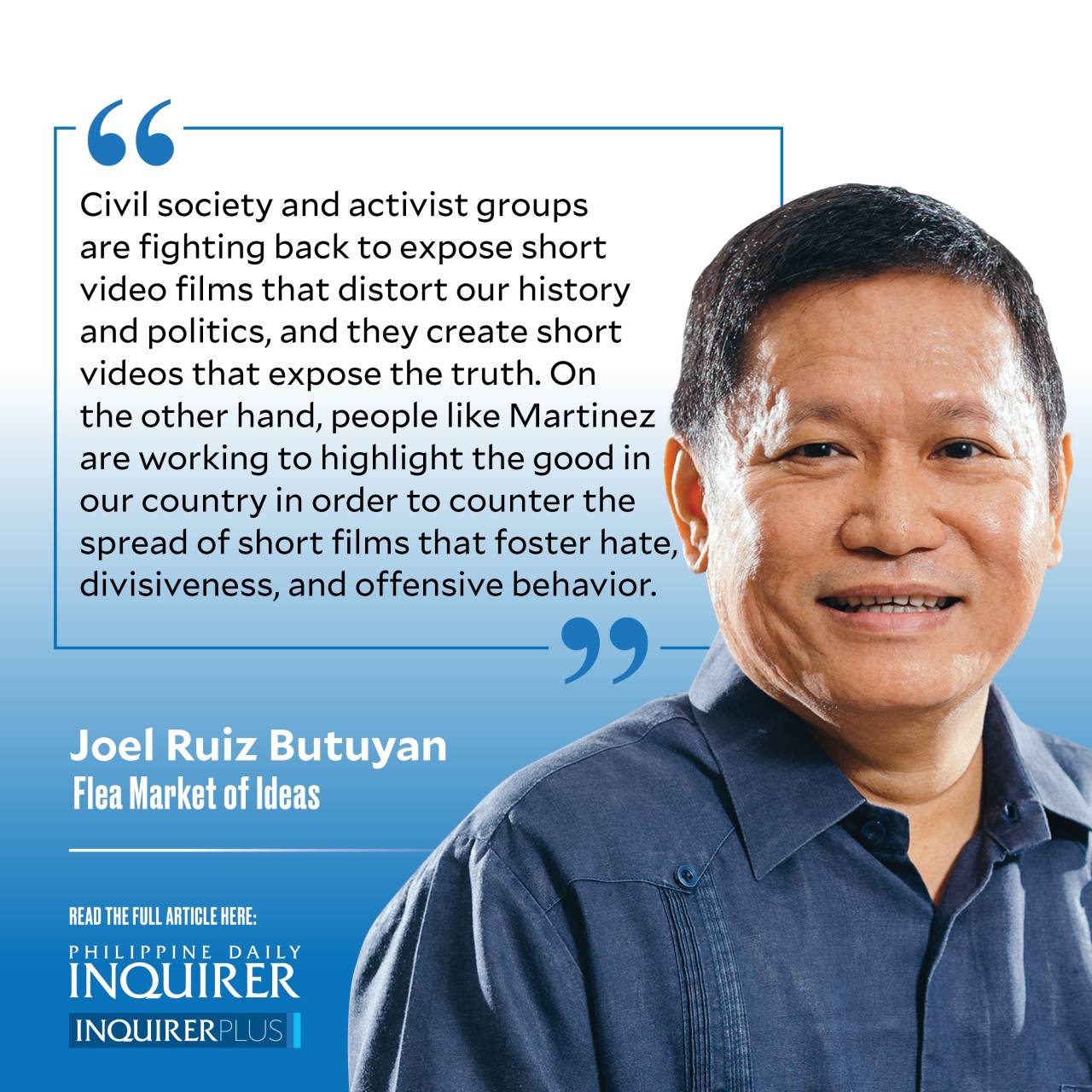 There’s an evolving trend in our language of choice. We’re witnessing a new era where our preferred way of communicating with the public is through films. Not the hourlong movies shown in cinemas, but the short video films that now abound on online platforms like TikTok and YouTube.

Short video films have become the most popular means of public communication nowadays because they’ve proven to be so effective, whether the objective is entertainment, political campaign, or commercial advertisement. It has given rise to a new set of entertainers, opinion-makers, and cultural leaders known as “influencers.”

For the longest time, short video films were the monopoly of business establishments that produce television commercials. But with the cheap availability of smartphones and the invention of online platforms that allow short films to be publicly shown for free, there’s been an exponential growth in short video films. Anyone who has a smartphone is capable of producing a short film, and in fact, we all do when we film and upload online a video of a short event in our lives.

Conscious of the power of short video films, a group called Batangas Forum is embarking on an interesting project called “Doon Po Sa Amin Pride Campaign.” The project is led by Leo Martinez, an actor, famed comedian, film director, and former director general of the Film Academy of the Philippines. Martinez emailed me after reading my article, “The soul of the Filipino” (7/21/2022), where I wrote about the need to nurture our unique gift in music as a people, and where I called for local government support for the formation of bands, orchestras, choirs, and theater groups in each locality.

Martinez shared that his group has partnered with the Batangas provincial government to hold a province-wide contest for the best short digital films, of two to five minutes duration, that will feature “the sources of pride of Batangas” in any of these categories: forms of art (music, literature, visual arts, theater, dance), natural and cultural heritage (religious, culinary, natural landscapes, flora and fauna), architecture, festivals and traditions, socioeconomic development, among others. The winners will receive cash prizes and their films will be shown during a Batangas Digital Film Festival that will be held online.

Martinez and his group give the rationale of their project as follows: “Today, we Filipinos are overly fixated on what is wrong with ourselves and our country. We are overwhelmed with things that are negative, man-made or otherwise. While we strive to address and resolve a myriad of issues, let us not forget to look at the good, beautiful and noble in us and in what we do. Looking at the positive side has become all the more necessary, especially in the midst of fears and uncertainties posed by the current pandemic. Our morale as a people needs an upliftment. A nation’s growth is propelled by the high morale of its people, achievable when its populace understands its country, appreciates its natural treasures and potentials, and consequently takes pride in their roots with an awakened sense of self-worth.”

Short video films are now powerfully changing our culture, morals, politics, and even our perception of history. Because of their effectiveness in conveying messages in entertaining ways, manipulators have gotten a head start in harnessing their powers to influence hearts and minds. As a result, what’s good in our country is overshadowed by what’s bad, and what’s bad is packaged as good, with the use of short video films.

Civil society and activist groups are fighting back to expose short video films that distort our history and politics, and they create short videos that expose the truth. On the other hand, people like Martinez are working to highlight the good in our country in order to counter the spread of short films that foster hate, divisiveness, and offensive behavior.

There’s an urgent need to wrest control of the use of short video films as our new language of choice, in order to harness it as an instrument of good rather than a weapon of wickedness in our country.