The pain of school closures 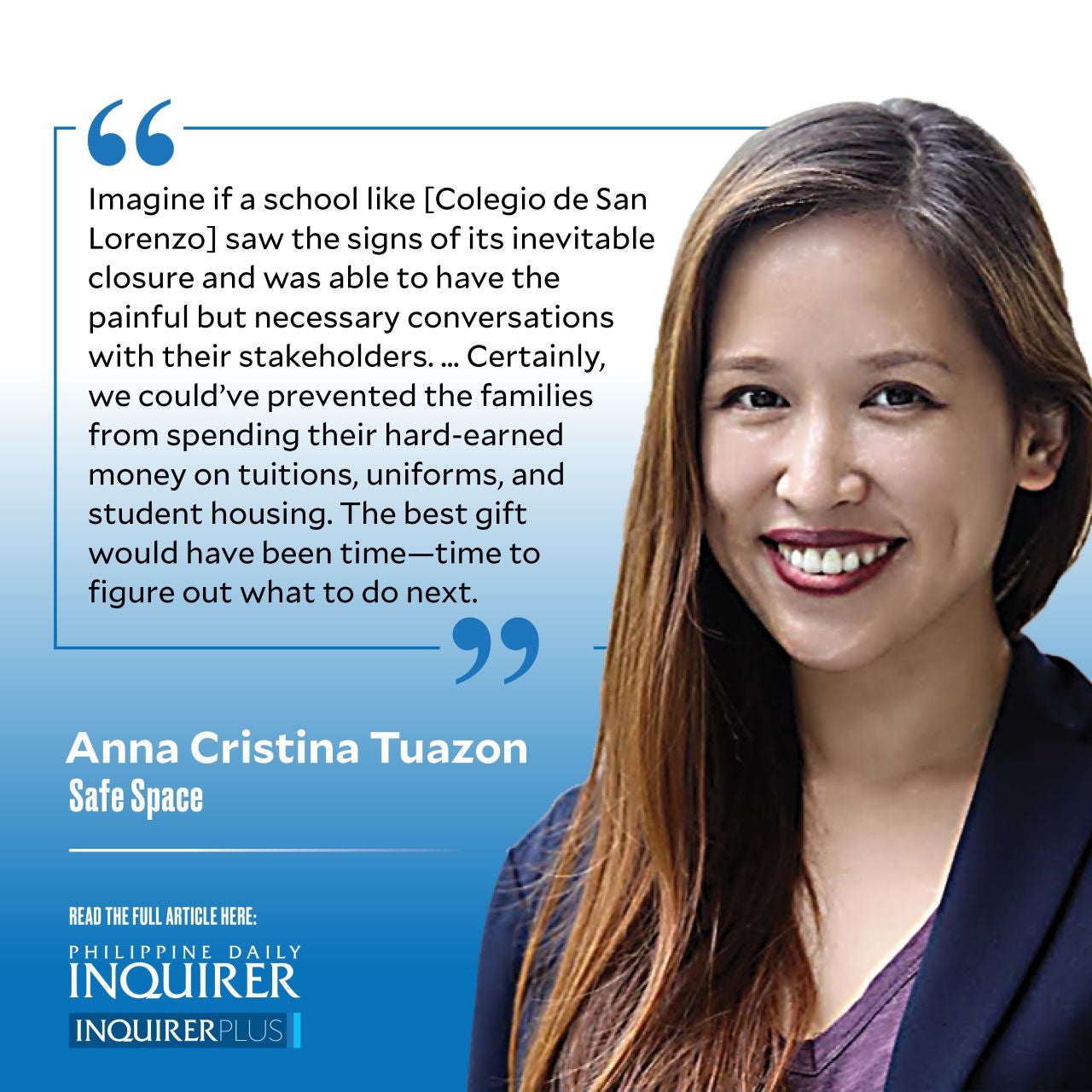 The pandemic has cost us more than 400 schools, leaving students with fewer options and making the admissions process that much more competitive and stressful. Once a school closes, it is difficult to replace it. The business of education is brutal, requiring a lot of capital with fixed yearly tuitions as income. As such, I wonder when we’ll ever, if at all, replace the centers of learning that we have lost. Colegio de San Lorenzo (CDSL) is the latest of a recent spate of school closures, made the more shocking as they chose to announce it during the first day of class—after collecting tuition fees. We can give the administrators the benefit of the doubt that they must have struggled, trying to solve a fiscal crisis that was ultimately insurmountable. No one wins when a business shuts down. The news coverage of the closure focused, rightly so, on the affected students. We cannot also forget that this means unemployment for all the staff and faculty—and we haven’t heard of assured job placements for them.

Even with such benefit of the doubt, however, I am disheartened and disappointed at the way CDSL chose to end things. A school shouldn’t just suddenly close; this is the kind of ending one can see coming years ago. They’ve seen the patterns of enrollment. They surely must have calculated how many school years they can afford to provide. Even the Commission on Higher Education (CHEd) is calling out how last-minute the notice was, as they are used to a yearlong process of closure to ensure that students are adequately taken care of.

Removing malicious intent, the only way I can see that this could have happened is that the school and its administrators weren’t willing to have difficult conversations with their stakeholders until it was too late. I’ve heard of people’s experiences in other schools where they communicated to parents and students that they were in a precarious financial situation, and they asked for help and patience as they try to solve these problems. They usually contend with painful options: faculty and staff layoffs, tuition fee increases, and seeking of additional investments and endowments for the school. Other schools were able to provide advance notices to students and their families that they can only stay open for one more school year, usually prioritizing graduating students, like in the case of Kalayaan College. The ability to know when a painful conversation must be done is crucial in preventing unnecessary pain later on. Filipino culture is generally avoidant or indirect when it comes to communication style, especially when confronting unpleasant facts. It’s a natural instinct, after all, to avoid pain whenever possible. However, part of the (supposed) evolution of our cognitive functioning is the ability to recognize long-term vs. short-term effects. Being able to focus on long-term goals teaches us restraint and patience as we persevere through short-term challenges to reach our end goal. In a similar way, we know that having painful conversations with our loved ones (and stakeholders) can bring about less pain for everyone down the road.

Imagine if a school like CDSL saw the signs of its inevitable closure and was able to have the painful but necessary conversations with their stakeholders. They would’ve held a parent and student assembly years ago, letting them know that the school is at a critical crossroads, and asked their constituents what options they were willing to undertake. Imagine if they had reviewed their finances and, while they still had the resources to push for one more school year, had alerted students to the situation and assisted them in their transfer applications. This early on, the students would’ve still had time to actually choose the schools they would want to transfer to. They could’ve prepared during the school break and not have to rush with admissions when classes are already ongoing. The graduating students would have had the option to push for the completion of their units, so they can graduate before the school had to close. Imagine if they had alerted CHEd a year ago and admitted that they were at the brink of closing. CHEd could’ve assisted in equivalency of units, transfers, and perhaps even financial assistance and scholarships for affected students. Perhaps CHEd would not have been able to do anything, but at least the school could claim they closed in good faith.

Doing all this won’t prevent all pain; the stress of having to apply and transfer to other schools is inevitable. However, we could have prevented the students’ experience of losing ground under their feet. They don’t even have time to feel shocked as they scramble to get placements in a school year that already started. Certainly, we could’ve prevented the families from spending their hard-earned money on tuitions, uniforms, and student housing. The best gift would have been time—time to figure out what to do next.