The fight for marriage equality 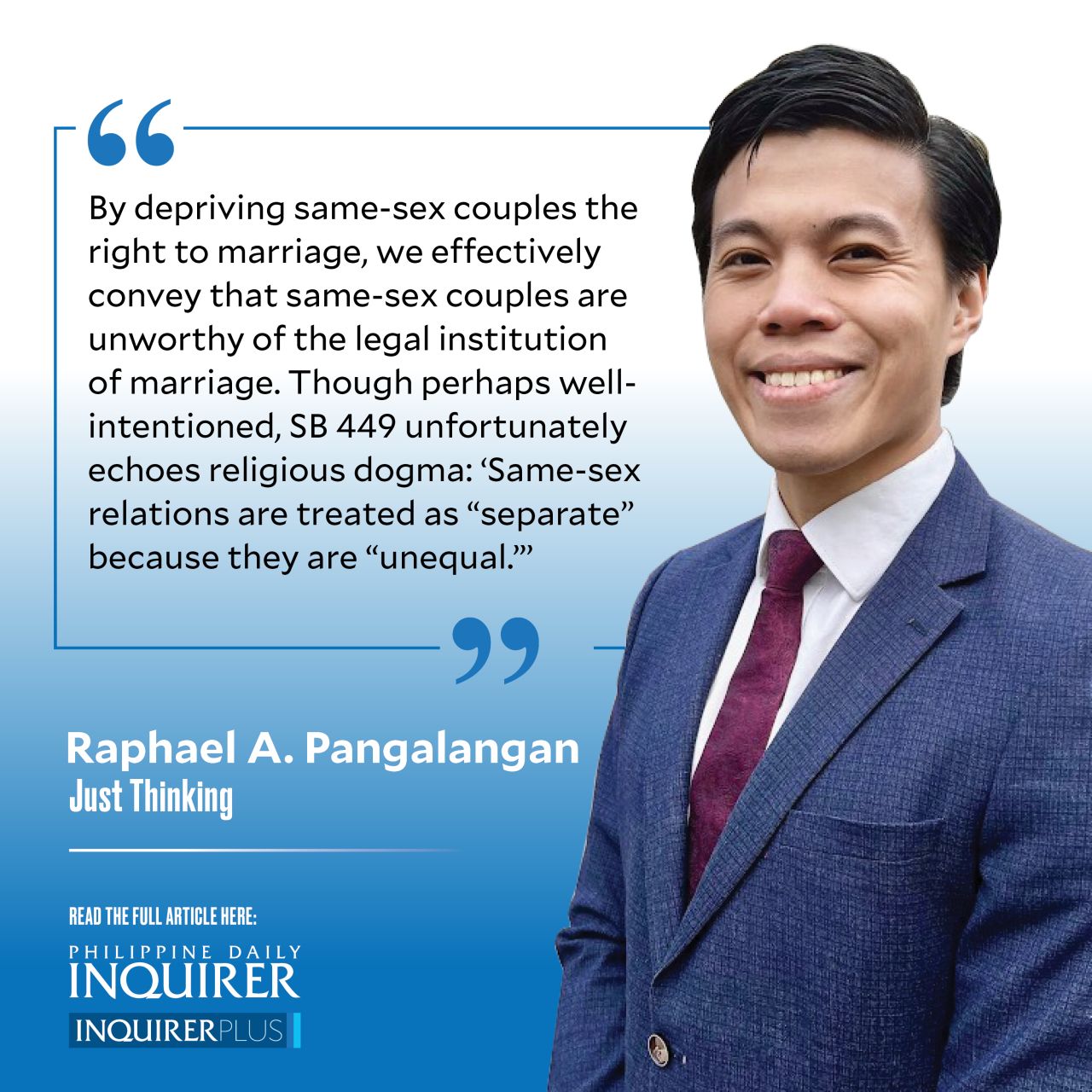 The institution of marriage has been historically celebrated as a union between a man and a woman. While we acknowledge that history, the debate does not end with it.

This is not the first time that a bill regulating same-sex relations has come to the fore. In 2019, Sen. Imee Marcos proposed SB 417, protecting the property relations of same-sex couples who have been living together for at least one year. Similarly, in the House, Albay Rep. Edcel B. Lagman Jr. filed House Bill No. 3179 in 2013 proposing “An Act Governing Property Ownership of Couples of Same Sex (sic) Living Together.” In its explanatory note, Hon. Lagman expressed that because the Christian faith holds a degree of influence in state affairs, same-sex marriage has yet to find a place in the Philippine legal system. Like SB 417, HB 3719 does not provide for a right to marriage, but proposes a marital-like property regime for same-sex couples.

Likewise, in 2017, Speaker of the House Pantaleon Alvarez filed HB 6595, proposing “An Act Recognizing the Civil Partnership of Couples, Providing for their Rights and Obligation.” HB 6595 sought to afford same-sex couples “[a]ll benefits and protections as are granted to spouses in a marriage under existing laws.” Notably, it required that same-sex couples must have shared “a common domicile for a minimum of two (2) uninterrupted years” and that their relationship was “publicly known.”

And, of course, while on the topic of proposed legislation on same-sex relations, how could we forget the infamous HB 6919 of 2009? Authored by Manila Rep. Bienvenido M. Abante Jr., HB 6919 was detestably entitled: “An Act Declaring Illegal Same-Sex Marriage, Providing Penalties for Violation Thereof, and for Other Purposes.”

As my fellow millennials would say: Sheesh!

Save for that last bit, these proposed bills are undoubtedly progressive efforts worth welcoming, one way or another. Indeed, to Senator Padilla’s credit, SB 449 recognizes same-sex relations as a human rights matter by invoking the Yogyakarta Principles on the Application of International Human Rights Law in relation to sexual orientation and gender identity. Yet, in that same breath, rather than curing the age-old disease of discrimination, these bills are mere band-aid solutions to society’s repudiation of the LGBTQ+ community.

In my paper “Relative Impermeability of the Wall of Separation” published by the Cambridge University Press, I discuss in detail how Congress has attempted to circumvent the traditional objections to same-sex marriage by affording the same bundle of marital rights to a “distinct” institution: the civil union. Tweaking the Anatidaen duck test, our legislators claim: Just because it looks like a duck, swims like a duck, quacks like a duck, and probably is a duck, it doesn’t mean we need to call it a duck.

Perhaps at first glance this approach deserves scant criticism. After all, if the same rights of marriage are afforded to same-sex relations, then the difference between the legal status of heterosexual marriage and same-sex unions would not be substantial but nominal.

I ask: What’s in a name? I answer: Everything.

The marriage equality debate is about the value “We the People” ascribe to and acknowledge in same-sex relations. While these bills seek to afford same-sex couples the same rights of marriage, it restricts the right to marriage to its legal, traditional, and religious definition: as a bond between a man and a woman.

On its face, the proposed legislations treat heterosexual and same-sex relationships as “separate but equal.” And as we all should know, “plessy” equality is not equality at all. Indeed, while a marriage under the Family Code would simply require that “a man and a woman” obtain a valid marriage license, have the legal capacity to enter into marriage, and that they freely consent thereto in the presence of a duly authorized solemnizing officer and at least two witnesses of legal age; same-sex unions face much higher hurdles. For example, a civil partnership under SB 417 and HB 6595 would be subject to additional “residency” and “publicity” requirements. Similarly, Senator Padilla’s SB 449 provides that same-sex couples must be “habitually residing together” in order to obtain a “civil union license.”

Equality? I think not!

By depriving same-sex couples the right to marriage, we effectively convey that same-sex couples are unworthy of the legal institution of marriage. Though perhaps well-intentioned, SB 449 unfortunately echoes religious dogma: “Same-sex relations are treated as ‘separate’ because they are ‘unequal.’”

A rose by any other name may smell as sweet, but even Shakespeare has warned: “Hath not thy rose a thorn?” In affording same-sex relations the rights of marriage yet depriving them the right to marriage, Congress does not break away from the religious underpinning of Philippine marital law. On the contrary, it embraces it.

The fight for marriage equality continues.