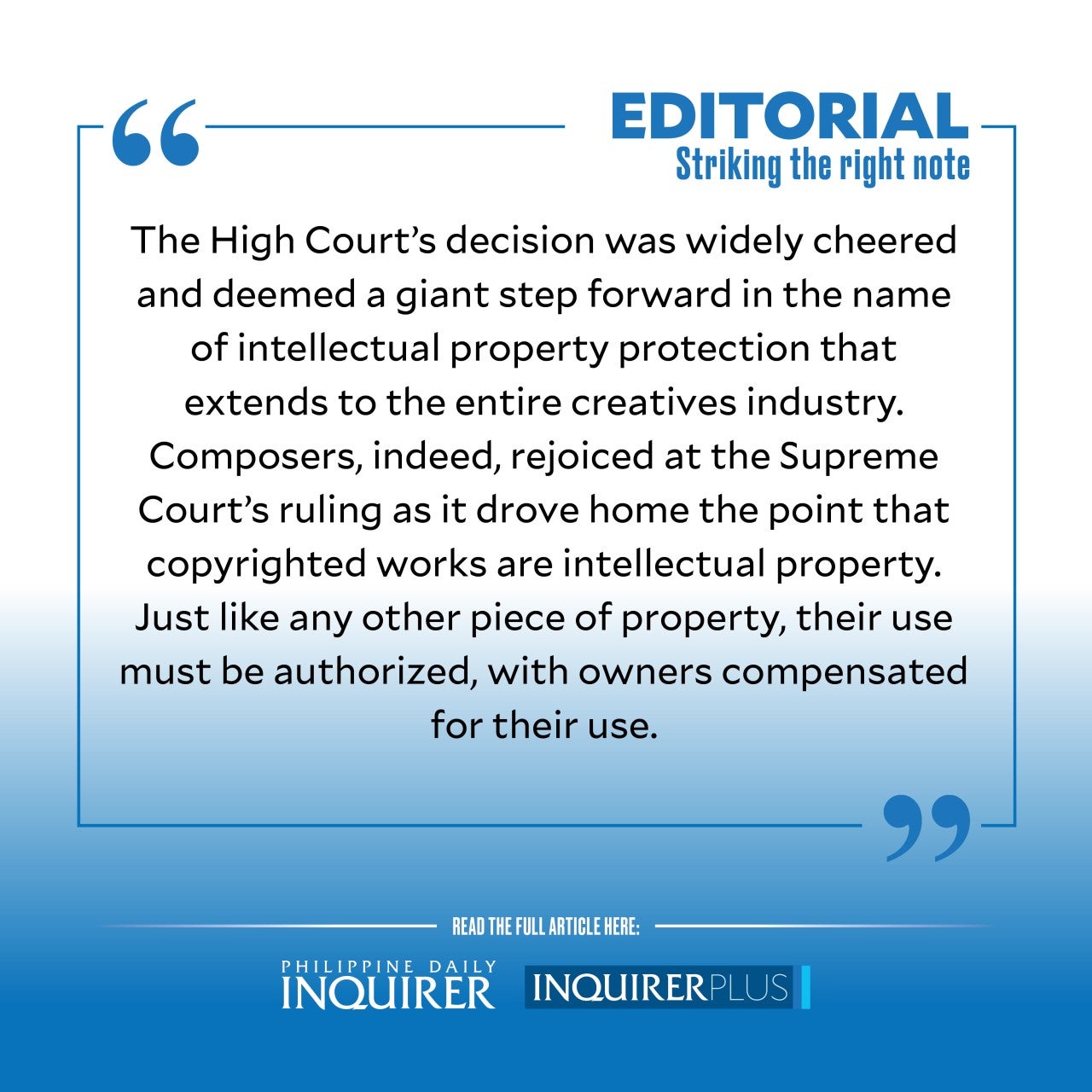 The country’s music industry scored a major legal victory last week following the Supreme Court’s decision that affirmed the right of the Filipino Society of Composers, Authors, and Publishers Inc. (Filscap) to collect royalties from the use of its members’ copyrighted works, and sue for copyright infringement to protect these members’ interests.

According to the en banc decision penned by Associate Justice Rodil V. Zalameda, commercial establishments must pay for the use of copyrighted music that “enhance profit by providing entertainment to the public” as this constitutes “public performance” that is entitled to copyright protection.

The case stemmed from the refusal of Anrey Inc., operator of two Sizzling Plate restaurants in Baguio, to pay Filscap for the use of its members’ copyrighted music, saying that the dining outlets were just using music already being played on the radio that was, in effect, “free.” The restaurant group also argued that it was exempt from securing a license since the radio station already had one, a claim that Filscap vigorously disputed. Pressing its claim, the group filed an infringement case against Anrey in 2008.

The nonprofit society of music creatives that owns the public performance or public playing rights over its members’ copyrighted works initially lost at the Baguio Regional Trial Court and the Court of Appeals, but ultimately won its case at the Supreme Court.

Citing US jurisprudence, the Supreme Court ruled that playing radio broadcasts containing copyrighted music through loudspeakers in a restaurant, for example, “is, in itself, a performance” that is separate from the radio broadcast, and is thus entitled to its own protection. Music from the radio transmitted through loudspeakers to enhance profit “does not constitute, and is not analogous to, fair use,” the ruling said,

In short, the establishment must pay for the use of copyrighted music even if they were just playing the songs from the radio.

The High Court stressed that denying Filscap’s petition to collect royalties “would gravely affect the copyright holder’s market where instead of paying royalties, they [would just] use free radio reception.” It added that exempting restaurants from paying royalties will also affect other uses in similar establishments, such as malls, department stores, and lounges, “causing a huge economic impact on the music industry in general.”

While largely overshadowed by news of Lydia de Vega’s death, the sugar importation mess, and the outrage over the banning of several Filipino books, the High Court’s decision was widely cheered and deemed a giant step forward in the name of intellectual property protection that extends to the entire creatives industry.

Composers, indeed, rejoiced at the Supreme Court’s ruling as it drove home the point that copyrighted works are intellectual property. Just like any other piece of property, their use must be authorized, with owners compensated for their use.

The ruling affects those who intend to use copyrighted songs in concerts or events, TV, and radio stations, or in establishments, such as hotels and restaurants, shopping malls, cinemas, office spaces, and even salons, gyms, dance clubs, and similar establishments, which should first secure and pay for a license, with the proceeds going to the copyright owners.

That the copyrighted works are now explicitly protected is an encouraging and reassuring development for creatives, and a welcome move by the new administration that has vowed to nurture the growth of the entire creative industry.

“We require an institutionalized creative industry that will advance the interests of its stakeholders—sila na nagbibigay ng kaluluwa at [pagkakilanlan] sa ating pagka-Pilipino (they who give soul and identity to our being Filipinos). Let us protect them,” President Marcos Jr. said in his first State of the Nation Address.

His avowed commitment and the Supreme Court ruling that recognizes the plight of artists and other creatives find parallel in the Philippine Creative Industries Development Act that lapsed into law last month. The act mandates the promotion and development of domestic creative industries by, among others, protecting and strengthening the rights and capacities of creative firms, creators, workers, content providers, and artists, including songwriters and composers.

This is expected to spur the growth of a high-value sector that already contributes over 7 percent to the country’s gross domestic product, according to the Joint Foreign Chambers of the Philippines.

“We believe that creativity is the next big thing. People now sell ideas. So, if you want the economy to grow, you must develop and promote the Philippine creative industries,” Senate Minority Leader Aquilino Pimentel III has said.

It is an aspiration that the Supreme Court’s recent ruling has advanced considerably, while reminding Filipinos that copyright protection is a right that should be respected and upheld.