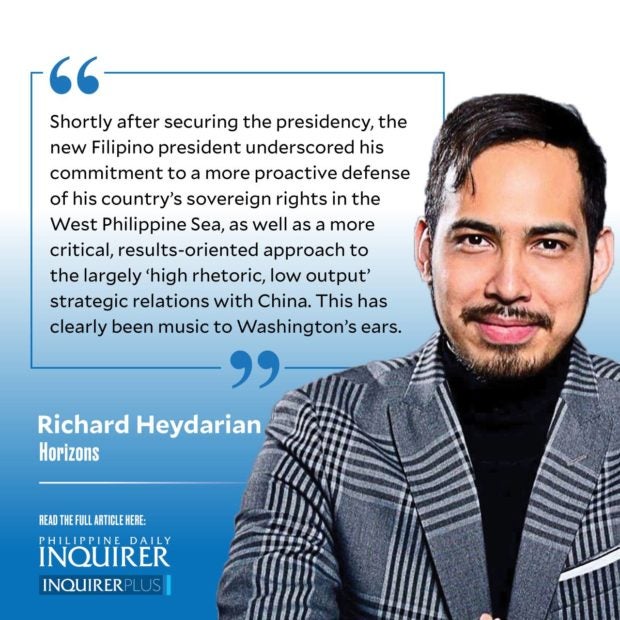 Earlier this month, President Marcos Jr. met America’s most senior diplomat in Malacañang. For US Secretary of State Antony Blinken, widely known as US President Joseph Biden’s alter ego, it was his first official visit to Manila. Make no mistake: This was no routine exchange of pleasantries.

Over the past half-a-century, the relationship between the Marcoses and America has been nothing short of a rollercoaster. Almost four decades ago, the notorious dynasty had to flee the same halls aboard a US Air Force plane in order to avoid the fate of less fortunate fallen tyrannies (think of Romania or Russia).

The twilight decades of the 20th-century America, at once, represented both a vital ally and a political sanctuary for the Marcoses, who spent their brief yet luxurious exile in Hawaii, as well as a site of numerous court cases based on allegations of widespread human rights violations and corruption during the dark days of martial law. And it goes without saying that the Marcoses weren’t pleased with the Raegan administration’s eventual, albeit initially reluctant, embrace of the democratic opposition.

Thus, Mr. Marcos’ meeting with Washington’s most senior Cabinet member represented a major juncture in both Philippine-US relations, as well as the dynasty’s ties with America. Ahead of Blinken, the new Filipino president held a flurry of meetings and exchanges with top Western officials, including a cordial phone conversation with Biden as well as in-person meetings with two of the most capable diplomats in Washington, namely Deputy Secretary of State Wendy Sherman and the new US ambassador to Manila MaryKay Carlson.

Right off the bat, the new Filipino president made it clear that his term won’t be a poor replica of his Beijing-friendly predecessor, Rodrigo Duterte, who made anti-Western pronouncements a centerpiece of his stream-of-consciousness foreign policy speeches. Mr. Marcos signaled that the fundamentals of the alliance will remain intact after six years of disruptive populism under Duterte.

“We cannot, we can no longer isolate one part of our relationship from the other. We are too closely tied because of the special relationship between the United States and the Philippines and the history that we share,” Mr. Marcos told his guest. On his part, Blinken made it clear that Washington treats Manila as an “an irreplaceable friend, partner, and ally” and reassured his hosts that “an armed attack on Philippines’ armed forces, public vessels, or aircraft in the South China Sea would invoke US mutual defense commitments under that [Mutual Defense] Treaty.”

What made the meeting even more interesting, however, is Mr. Marcos’ statement on the ongoing crisis in neighboring Taiwan. Instead of laying blame on the US House of Representatives Speaker Nancy Pelosi’s controversial visit to the self-ruling island nation, Mr. Marcos nonchalantly stated, “To be perfectly candid, I did not think it raised the intensity, it just demonstrated it—how the intensity of that conflict has been. It actually has been at that level for a good while, but we got used to it and put it aside.”

No other Southeast Asian nation has so categorically shut down Beijing’s (self-serving) narrative on what many have come to see as the “Fourth Taiwan Strait Crisis.” The Taiwan issue is particularly sensitive for Manila for two major reasons: First is the “tyranny of geography,” since the Luzon strait separates the two nations by just over 200 miles; and second is alliance entanglements since the Philippines will almost inevitably serve, or be treated, as a major base of operations for US and allied troops in an event of contingency.

Early in office, Mr. Marcos rebooted Philippine foreign policy toward major powers. While open to robust commercial ties with China, Mr. Marcos has effectively tossed out his predecessor’s often fawning, if not slavish, predisposition toward the Asian superpower.

Shortly after securing the presidency, the new Filipino president underscored his commitment to a more proactive defense of his country’s sovereign rights in the West Philippine Sea, as well as a more critical, results-oriented approach to the largely “high rhetoric, low output” strategic relations with China. This has clearly been music to Washington’s ears. It also underscored Mr. Marcos’ determination to fully restore, if not further expand, a century-old alliance on the verge of collapse only a few years earlier.