Growth against the odds | Inquirer Opinion

Growth against the odds 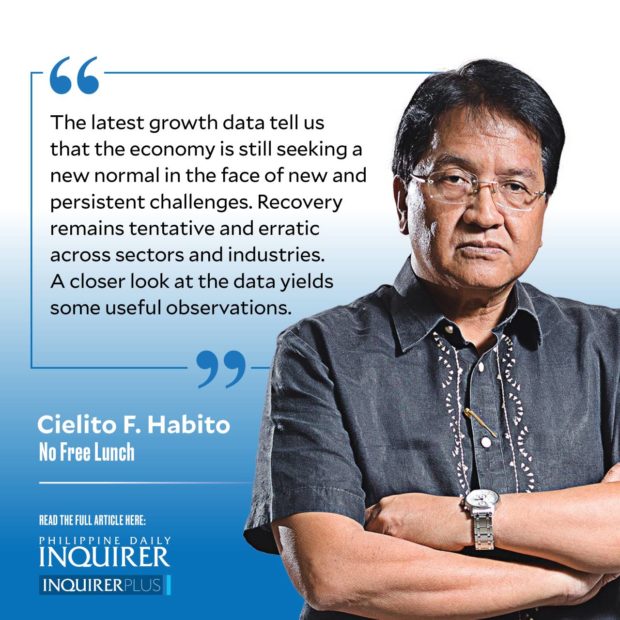 The 7.4 percent second quarter year-on-year growth of the economy was good news to me, even as it disappointed many who compared it to the 8.2 percent growth in the first quarter. I actually expected it to be within the 6-7 percent average growth pace we’ve had over the past decade prior to the pandemic. I found the earlier jubilation over the Q1 growth misplaced, knowing that it was the result of the classic “base effect” of growing from an abnormally depressed base. That is, it was measured against a GDP level that had fallen by 3.8 percent in Q1 last year, at the tail end of the deep pandemic-induced recession.

But the economy had already rebounded by a hefty 12.1 percent in Q2 last year, which is why I was certain that Q2 growth would be significantly less than in Q1. With the reverse base effect at play, I welcomed the fact that it was not much less than I thought. Even so, the latest growth data tell us that the economy is still seeking a new normal in the face of new and persistent challenges. Recovery remains tentative and erratic across sectors and industries. A closer look at the data yields some useful observations.

First, the services sector has retaken the lead in driving the economy’s growth, suggesting movement toward normalcy. It is again the fastest-growing sector (8.7 percent in the first half of 2022) compared to the agriculture, fishery, and forestry (AFF) and industry sectors (0.2 and 8.3 percent, respectively). The most pandemic-battered services industries—transport, accommodation, and food services—have bounced back with growth rates well over 20 percent. “Other services,” a catch-all for various industries mostly involving face-to-face contact, have jumped by over 30 percent, suggesting a “revenge” recovery to meet pent-up demands.

Growth has also resumed in the industry sector—composed of manufacturing, mining/quarrying, utilities, and construction—but remains tentative and faltering. In 2021, it outpaced both AFF and services with a growth rate of 8.5 percent, against their -0.3 and 5.4 percent, respectively. In particular, manufacturing grew by 8.8 percent in 2021, fueled by resumed growth in the export markets. But bottlenecks in global shipping and logistics quickly emerged, with stories of large numbers of ships parked in major world ports waiting to be unloaded. This appears to have contributed to manufacturing’s dramatic slowdown to only 2.1 percent in Q2. Meanwhile, mining’s strong 20.3 percent Q1 growth reversed to a -7.3 percent contraction in Q2, reportedly due to depressed world mineral prices. Government and household construction have seen dramatic slowdowns, but this was more than offset by the reversal to double-digit growth in private construction by corporations, from a deep contraction last year. Utilities have been steadiest, as last year’s 4.5 percent growth improved to 5.5 percent in the first half. Altogether, the industry sector’s growth has resumed but remains erratic.

Agriculture has not been as bright. After demonstrating remarkable resilience through the pandemic, suffering the lightest dent among the three major sectors, it is now growing positively again, but also at the slowest pace of a mere 0.2 percent. Even as livestock has finally returned to positive (albeit slight) growth, the major drag this time has been sugarcane, which sank by a hefty 27.6 percent as of the first half, affected by adverse weather in the past year. And while a looming supply shortage and the prospect of further skyrocketing prices stare us in the face, importing the commodity to forestall such crisis is now the subject of a political drama, rather than a matter of economic urgency informed by evidence.

The unfortunate casualty is Dr. Leo Sebastian, one of the most highly competent, professional, and internationally respected agricultural officials I have ever worked with. As duly empowered alter ego of the President and secretary of agriculture, he made an urgent and necessary decision that Malacañang now disowns, clearly for political reasons.

We have yet to learn to free sound economic management from politics and populism. Until then, good luck to us Filipinos.