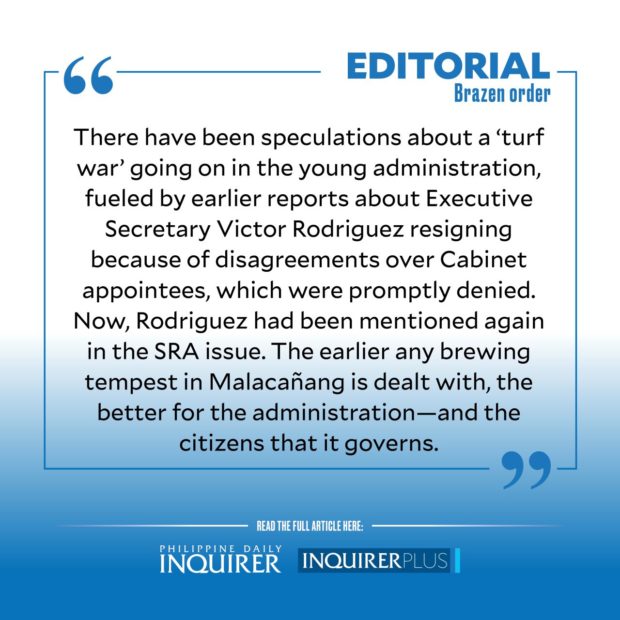 The first resignation in the two-month-old Marcos Jr. administration raises more questions on the mysterious circumstances that made an underling brazen enough to affix President Marcos Jr.’s signature on an order authorizing the importation of 300,000 metric tons of sugar.

After the importation order was posted on the Sugar Regulatory Administration (SRA) website, Press Secretary Trixie Angeles said the order was illegal and that Mr. Marcos, who chairs the SRA as concurrent chief of the Department of Agriculture (DA), “denied this in no uncertain terms.” Neither did he authorize any SRA meeting to approve such a resolution, she added.

“The resolution was issued in the President’s name; it was signed for the President by Undersecretary Sebastian. Such signing was not authorized by the President,” Angeles said, adding that an investigation was being conducted to determine who should be held accountable.

“In such a case, if such findings are made, then the only determination left will be how many heads are going to roll,” the press secretary said.

But before Malacañang could make heads roll, Sebastian resigned his post as undersecretary for operations and the President’s chief of staff at the DA. In a one-page letter, Sebastian apologized to Mr. Marcos for having approved the sugar importation “on your behalf, and through the authority you vested upon me.” He added: “I take full accountability and responsibility for its consequences.’’

Yet, the question remains: what (or who) emboldened Sebastian to usurp the President’s authority? It did not help that no explanation was immediately forthcoming from Malacañang on the action of the President’s representative in the DA and its attached agencies. Couldn’t Sebastian have clarified the order when he was reportedly in a meeting with Mr. Marcos prior to the issuance of the order? And what about the culpability of the SRA board members? One board member, Roland Beltran, quit on Monday citing health reasons.

Among those who first criticized the illegal importation order was the President’s sister, Sen. Imee Marcos. “Stop trying to fool my younger brother,” the senator said, naming no one, but adding that the illegal order was “ultimate proof that thick-faced agricultural smugglers are lording it over” at the DA.

In May, on the last days of the Duterte administration, Senator Marcos also denounced the “midnight importations of sugar” after the SRA issued an order to import 200,000 metric tons of the commodity. She warned that this was in violation of two temporary restraining orders (TRO) issued by the Sagay and Himamaylan regional trial courts in Negros Occidental last February. Sugar planters, who sought the TRO, vehemently opposed the importation of sugar, which they said then was “ill-timed” since it was their peak milling season.

Aside from investigating and charging those behind the unauthorized order, the President should also scrutinize the SRA’s policy of importing sugar—ostensibly because local production was affected by Typhoon “Odette” last December—in light of the sugar planters’ woes that importation would severely affect the local industry, which is always at the losing end of an importation regime.

While at it, the President should also tackle head-on the rampant smuggling that’s been going on for long, which allegedly involves high officials in the DA and the Bureau of Customs (BOC), in cahoots with smuggling syndicates that make importation so lucrative for corrupt government officials.

A recent Senate investigation has already identified these “untouchables,” including the highest officials at the BOC, the various agencies under the DA, down to personnel at the ports in Manila, Subic, Batangas, Cebu, and others where the smuggling of agricultural products happen right under the noses of authorities. Will these officials remain untouchable?

Smuggling, which is part of the culture of corruption, will continue unless the government firmly draws the line by filing cases against those using this illegal activity for unscrupulous gain.

As for the embarrassing SRA fiasco, it would be naive to think that Sebastian acted on his own, as he claimed in a House hearing, considering that, according to Angeles, the Marcos Jr. administration was “more systematic” in its governance than the Duterte administration. There have been speculations about a “turf war” going on in the young administration, fueled by earlier reports about Executive Secretary Victor Rodriguez resigning because of disagreements over Cabinet appointees, which were promptly denied. Now, Rodriguez had been mentioned again in the SRA issue. The earlier any brewing tempest in Malacañang is dealt with, the better for the administration—and the citizens it governs.