About those ghosts | Inquirer Opinion 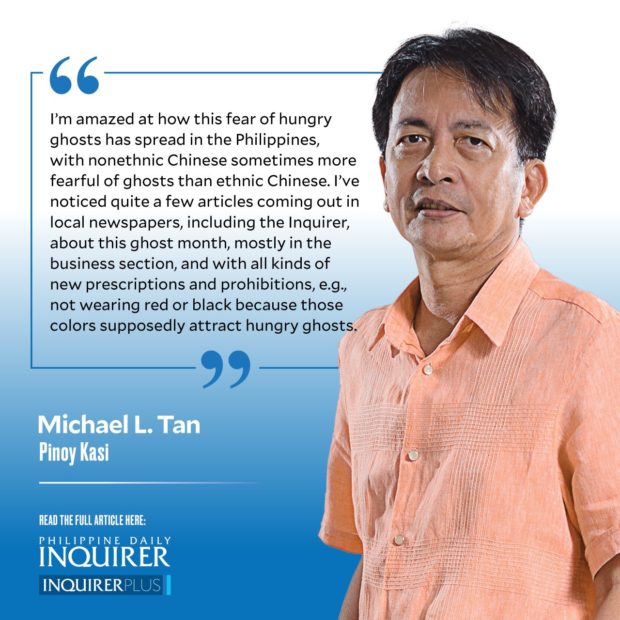 It’s safe, or, depending on who you ask, safer now; you can end your self-imposed self-quarantine and start traveling, and get back to your usual routine in life and work … without worrying about hungry ghosts.

I’m referring to Chinese Buddhist folk beliefs, now popular in the Philippines and other countries, that the seventh lunar month is the month of hungry ghosts who are allowed to roam the planet, causing all kinds of disasters, from vehicular accidents and plane crashes to stock market falls and business closures.

The hungry ghost month changes year to year depending on the lunar cycles. This year, it started on July 29, with hungry ghost believers’ anxieties escalating as the month unfolded, reaching its height on the 15th day of the lunar month. After that day, anxieties subsided but believers will still take precautions until the month is over, which this year will be on Aug. 26.

I’m amazed at how this fear of hungry ghosts has spread in the Philippines, with nonethnic Chinese sometimes more fearful of ghosts than ethnic Chinese. I’ve noticed quite a few articles coming out in local newspapers, including the Inquirer, about this ghost month, mostly in the business section, and with all kinds of new prescriptions and prohibitions, e.g., not wearing red or black because those colors supposedly attract hungry ghosts.

FEATURED STORIES
OPINION
Faithful and humble
OPINION
Our dependence on Pogos must end
OPINION
Can the BIR abate the Marcos estate tax?

All this doesn’t surprise me because the business world is, indeed, filled with dangers and vulnerabilities, making business people more prone to turning to magical beliefs and practices.

Besides business people, I’ve noticed physicians also take extra precautions, postponing elective (meaning nonurgent) surgeries or other sensitive procedures that might have complications. They are extra careful with ethnic Chinese patients, worried that if something goes wrong, the physician gets blamed for not believing in the ghosts.

Let me share a new take on these ghosts, which I got last Saturday while attending a Ksitigarbha prayer service at Guang Ming College (GMC) in Tagaytay, which is managed by a Buddhist group called Fo Guang Shan. FGS is a humanist Buddhist group that is working to modernize Buddhism by dealing with old “superstitions” and getting more involved in civic projects, in FGS’ case, education in particular.

In the Philippines, FGS has been the main supporter of GMC, where students do not pay tuition or any other expenses, including board and lodging. Students, none of whom are even ethnic Chinese, are not required to be Buddhist or to convert. Nevertheless, the college observes Buddhist practices like vegetarian meals, meditation, and optional prayer services.

It was my first time attending FGS’ Ksitigarbha services and although I am familiar with local Buddhist practices, I was pleasantly surprised to hear a different interpretation of the seventh lunar month in a brief homily from FGS’ Head Abbess, Ven. Yung Guang.

Ksitigarbha is known in Hokkien Chinese as “Te Tsong Pusat,” pusat meaning a bodhisattva or someone who postpones his or her own nirvana (Enlightenment and Buddhahood) to help other humans to reach this enlightenment.

Among those who Ksitigarbha helped when he decided to postpone his own Buddhahood was his own mother, and so the seventh lunar month is seen as a time to remember filial piety, with prayers offered, especially for deceased parents and elders.

But the compassion here is extended beyond kin, to all human and sentient beings, meaning animals and preternatural creatures, including hungry ghosts, who are described as those who have no living relatives or who have been forgotten by their kin as well as those who are being punished, in the underworld, for misdeeds in their life. Emphasis is placed on offering prayers to relieve their suffering, rather than spreading horror stories about them harassing living humans.

I smiled listening to Ven. Yung Guang describing the “gui” (Chinese for malevolent ghosts and demons) that we should fear: the greedy, the bloody, the dishonest. It reminded me of the homespun wisdom from elders: it’s people who cause problems, not ghosts.

I like the FGS and humanist Buddhist approach of gently reforming old beliefs and practices, in the case of the ghost month, moving people away from fear, toward remembering of deceased kin, and developing compassion for all living creatures, the hungry ghosts included.